Sensitive boys have a hard time in some cultures. What is acceptable male behavior in one culture is not necessarily acceptable in another. How do different cultures impact our highly sensitive boys? 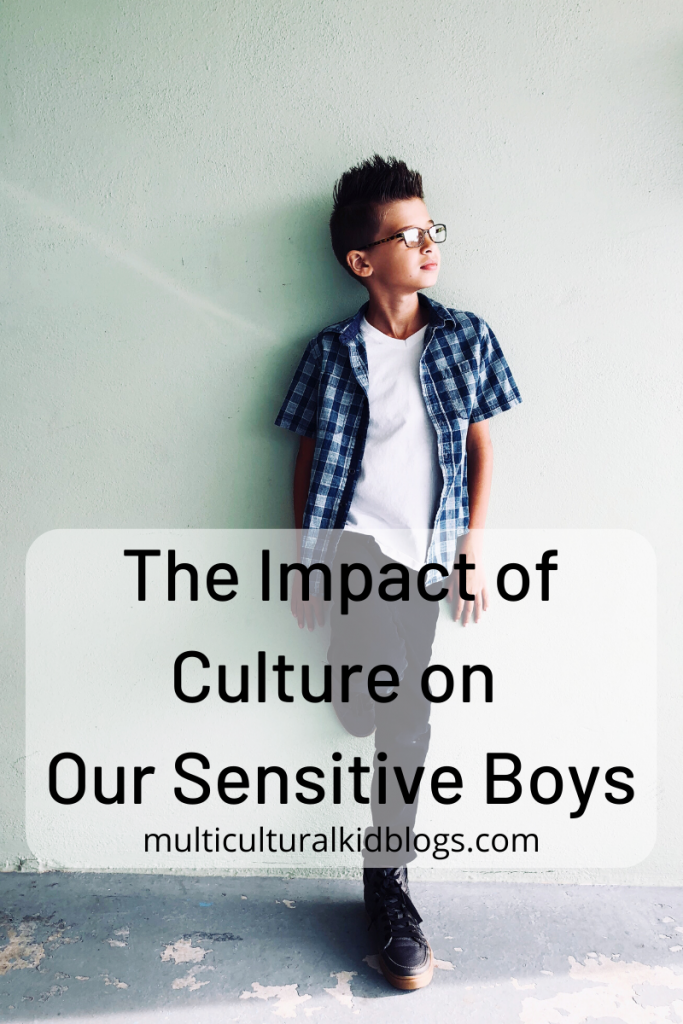 I first heard the term ‘highly sensitive’ from my eldest’s peuterspeelzaal (Dutch preschool) teacher. It was the catalyst for a new turn in the road on my parenting journey.

The fact is that highly sensitive children need a different approach. In the home. In school. From everyone involved in their care and upbringing.

What Does Highly Sensitive Mean?

In short, this means that highly sensitive people have difficulty filtering out external stimuli. This is particularly true of children. And so meltdowns are common as their nervous systems overload. It means lots of tears and many big emotions.

On the plus side, highly sensitive people feel deeply. We:

I soon learned that boys who wear their heart on their sleeve, boys who soak up the emotions of those around them, boys who aren’t afraid to cry, attract attention. Sometimes negative attention.

Some Cultures Value Sensitivity, Others Do Not

Why Some Cultures Value Sensitivity: Old vs. New Countries

“..in some cultures it is a social advantage, an honor to be sensitive. And a study comparing elementary school children in China and Canada found that being a “sensitive, quiet” child was associated with being popular in China, but being unpopular in Canada.”

Sensitivity is seen as a positive trait in Nordic, North European and Asian countries. But it is considered much less positive in North America.

Elaine Aron states that the cultural differences in the acceptance of sensitive traits may be due to the distinctions between ‘old’ cultures and ‘new’ immigrant cultures.

The United States, Canada and Australia as examples, are countries founded through adventurous risk taking. Tough and ‘macho’ pioneers were the foundation of these ‘new’ countries, exploring and taking over lands with more peaceful and sensitive values, traditions or even cultures.

In contrast, China and Europe have a rich and long history of spiritual and philosophical traditions.

How Does Society Expect a Male to Behave?

In general, ‘older’ cultures see sensitive traits in males as positive, but ‘new’ countries deem them to be negative. These different cultural views of sensitivity become vital when we look at what constitutes acceptable male behavior in different cultures.

Societies have constructed models of ‘normal’ male behavior. The definition of masculinity is dependent on the culture, the country, or even the community you live in.

Some societies shame those with sensitive traits and equate sensitivity with effeminate behavior. The idea that ‘boys don’t cry’ is very much alive and kicking in some societies.

These notions around sensitivity are socially constructed, so we can also play a role in deconstructing them.

It is acceptable for females to cry but in some cultures people are uncomfortable if males cry. Are women more emotional than men? No.

It’s more that we have accepted gender stereotypes in many Western cultures. It means that males amend their behavior to fit the stereotype of the culture they live in. To their detriment.

There is a link between sports and ‘masculinity’ in North America.

However, many highly sensitive children prefer individual sports. Many highly sensitive boys do not feel the need to compete and are not interested in physical, aggressive sports. These children do not perform well under group pressure and don’t like the jostling and teasing that often goes hand in hand with the competitive world of male team sports.

And it’s not just sports where men are expected to act ‘macho’. Ted Zeff shares in his prominent work on sensitive males that male role models in movies are also cultural.

“Ashok, an engineering student from India, told me,….”We see different role models in the media than in the U.S. For example, since I was a boy, I was a great fan of a movie actor in India named Amir Khan. He appeared sensitive and passionate in all his movies, opening his heart and forthrightly expressing his feelings. I don’t think Amir Khan would be as popular in the United States since most of the American male movie stars always act so tough and never show their vulnerability.”

Exposing our sensitive boys to these kind of role models in countries where sensitivity is seen as negative does nothing but sow seeds of doubt. Society’s expectations put pressure on sensitive boys to behave in an inauthentic manner.

I live in the Netherlands where many fathers embrace an active child care role. Fathers take ‘papa days’. They regularly take time off work to stay at home with their children.

The situation in Denmark is similar; a father pushing a pram around Danish streets is nothing unusual.

The fact is that society determines which activities are viewed as male, and which are deemed to be female. But thankfully, in some countries at least, the traditional lines between female and male roles are blurring.

The Netherlands and Denmark are founded on a consensus culture where differences are accepted. (Note also that these two countries also dominate the leaderboard of happiness surveys, year after year.) We can learn from such societies if we are willing.

The values of a society determine how people are treated. How a society treats and labels a sensitive boy has a huge impact on how that boy feels growing up.

A sensitive male in North America, living in a dominant macho culture, does not fit into the stereotypical male mold. Therefore, society shames this male for not acting ‘manly’. As a result, it means a life of not fitting in. This in turn has a huge impact on self-esteem and self-worth.

Our sensitive boys suffer from depression.

“According to the National Association of School Psychologists, 160,000 children miss school every day in the United States for fear of being bullied and more than 50 suicides have been linked to prolonged bullying. School-related bullying has led to depression and poor school performance in many children.” Highly Sensitive Refuge

Inevitably, asking a male to mask his sensitive personality and play act at being more ‘masculine’ to fit in can lead to suicide.

Male suicide rates should shock us all. Men in the Western world are up to four times more likely to commit suicide than women. A common explanation is the socially constructed model of masculinity and how it impacts males.

The Impact of a Culture

Culture influences all aspects of our lives. In some cases, it’s a positive force. Other times its impact is negative. For any highly sensitive person living in a non-sensitive world life can feel problematic. But for a male it’s even more complicated.

Where a sensitive male lives determines the acceptance for his sensitive traits.

Raising sensitive boys in a culture that struggles to understand and accept them is an extra challenge for parents.

But there is hope. Because people are working hard to gain acceptance and understanding for highly sensitive people in a non-sensitive world.

People are leading movements to gain recognition and appreciation for introverts in an extrovert world.

We need to keep having these discussions.

We need to keep challenging.

Are you raising a sensitive boy? How do you see the role of culture and sensitivity interacting?