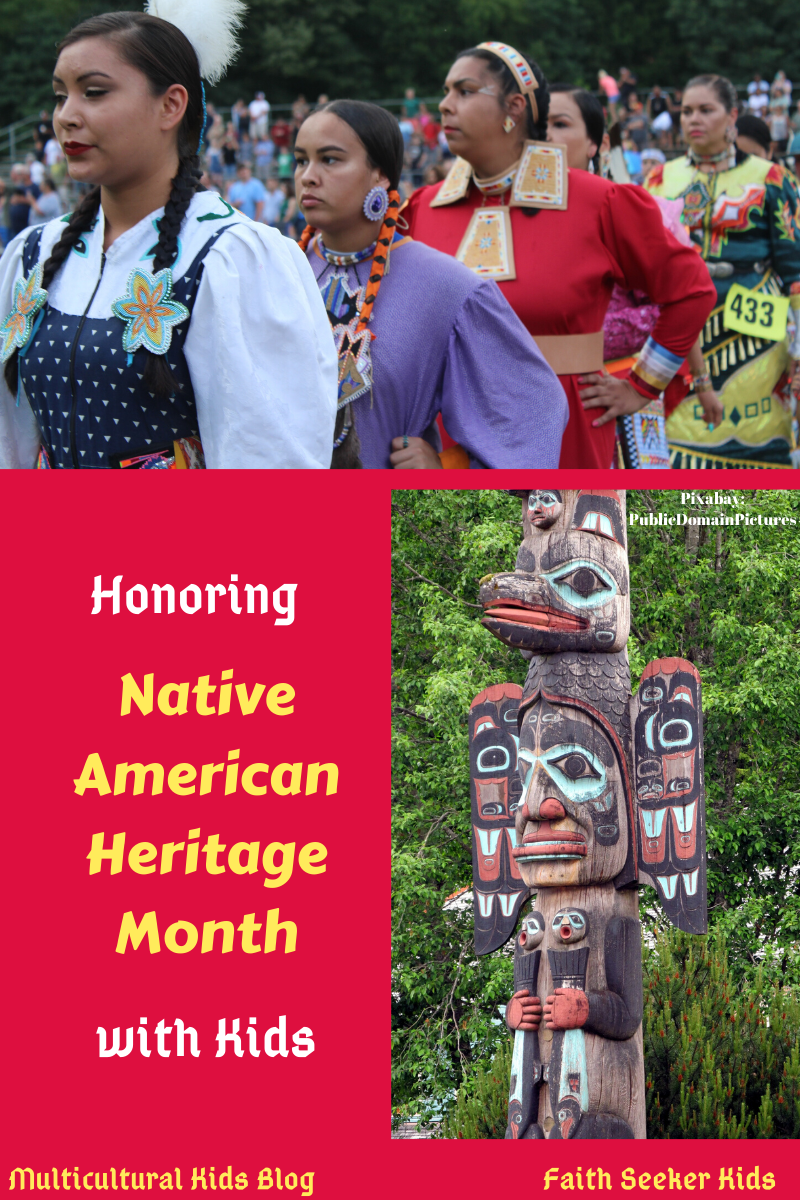 Disclaimer: Native American Heritage Month is a U.S. holiday. This post, which focuses on the original inhabitants of the U.S., is not intended to diminish indigenous peoples from other parts of the globe. We encourage you to adapt these ideas to your region of the world.

Below are 10 different ways to honor, celebrate, and learn about Native American heritage month with your kids.

Disclosure: This post contains affiliate links. If you click through and make a purchase, Multicultural Kid Blogs receives a small commission at no extra charge to you.

No matter where you live in the U.S., indigenous people lived on that land before you. There are almost 600 federally-recognized tribes in the U.S.

Learning about your local history is a lot of fun.

This interactive map from Native Land is really amazing! Type in your address, and the program will zoom in to identify which tribe/s first lived on “your” land. Then, visit your local museum or conduct a few internet searches to find out more.

Where I live, in Asheville, NC, we occupy the land of the Eastern band of Cherokee. Many descendants of those original inhabitants still live in Cherokee, North Carolina, on the Qualla Boundary.

We are fortunate that they offer lots of resources, including:

The Museum of the Cherokee Indian

The Qualla Arts and Crafts Mutual

Pow-wows are cultural events that are open to the public. They highlight Native American dress, dance, food, and music. And, it’s really fun for kids to see Native American kids their age in ceremonial dress.

Here are a couple of photos from last summer’s pow-wow. One noteworthy event was a dance by the current National Hoop Dance winner who happens to be from the Cherokee-Eastern band tribe.

It’s almost impossible to over-estimate the importance of bison to Native American culture, especially for the Plains Indians.

Almost every part of the bison was integral to their life and livelihood—they ate bison meat, used the hides to make clothing, and the hair was used to stuff pillows and weave rope.

Bison bones were used for bowls and jewelry and their fat was used as soap and cooking oil. Bison organs, like the bladder, were used as pouches for storing personal items.

But the buffalo was also a sign of the Creator God. Like the universe itself, the buffalo provided everything needed for existence. The buffalo also connected the tribes-people to the Great Spirit, and it served as a symbol of strength and abundance.

Tragically, the bison population literally went from 30 million to about 1,000 over the course of America’s westward expansion.

Massive conservation efforts began in the late 20th century and, today, bison now number in the hundreds of thousands. In 2016, the American bison became the National Mammal of the U.S.

And this video, for older kids and adults, provides an informative 15-minute account of the revival of the American bison.

Games have always been important to Native Americans. In fact, the first European settlers noticed it almost immediately. Like many historic pastimes, Native American games often made use of balls, sticks, and other items made from natural materials.

One of our favorite games is “Hubbub,” which is also known as the “Bowl Game.”

To play, position two kids (or two teams of kids) across from each other with a wooden bowl between them. Place 6 objects in the bowl.

Traditionally, the game pieces were stones colored black on one side and white on the other.

Today, people use all sorts of different objects, including pumpkin seeds marked on one side. We use metal bottle caps.

The game is played by striking the bowl on the ground/floor which causes the items to bounce. Points are awarded based on how many objects land on the same side. There are many different scoring systems, some of which are rather complex. Here’s how we score it:

For other game ideas, consider Native American Games and Stories

Native American food consistently showcases their deep connection to the earth. Indigenous peoples learned long ago to eat what they could hunt and harvest from the land. Two foods, however, stand out as favorites among many Native American tribes: fry bread and three sisters (corn, squash, and beans) soup. You can find many recipes online, but these recipes from Little Things are a great place to start.

5. Study Up on Native American Dwellings

Traditional Native American homes were made of natural materials and sheltered tribe members from the specific climate conditions of the region. For example, houses in warmer climes could have open sides or be made with grass. Homes were also designed to match a tribe’s lifestyle. Tribes that settled more permanently often made structures using dried plaster or clay. Tribes that were more nomadic often used tepee-like structures that were easier to take down and move.

Making a model Native American home is also a great way to learn. We love these tepees made from a free template offered by that artist woman. We’ve done this craft many times with kids of all ages. Real twigs broken to the appropriate length are optimal, but we’ve also used small, wooden cooking skewers as seen in this tepee made by one of the middle-schoolers in our interfaith program. 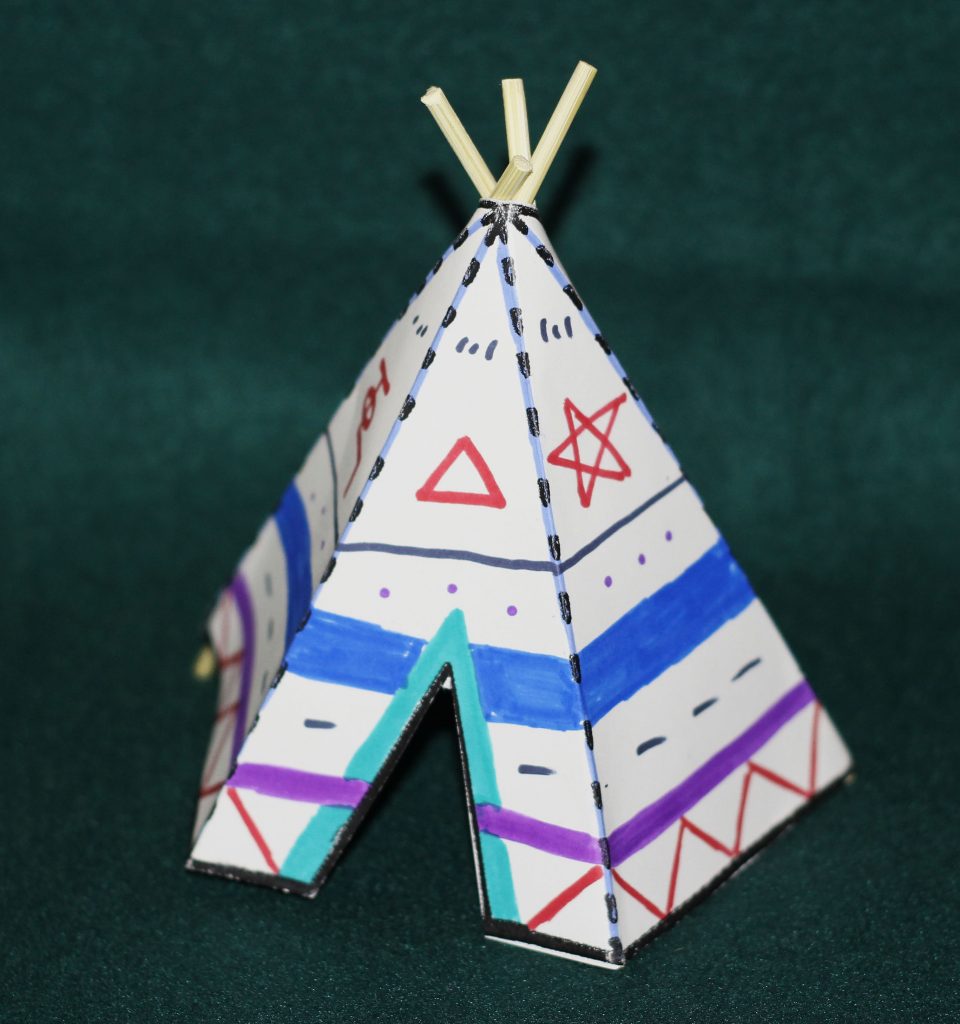 Learning and reading about new creation stories is a great way to honor Native American Heritage Month with kids.

Most tribes hold ancient myths about how the world came to be. They include tales about how the universe was created and how animals came to have their characteristic features.

So, venture into some creation stories different from your own.

Human survival relies on our ability to view the world from different perspectives.

Plus, exploring the stories of other cultures is simply fascinating! One of our favorite videos is this one, which tells the Hopi origin story.

Several books also offer anthologies from various tribes. Two good ones are The Girl Who Helped Thunder and Other Native American Folktales

7. Bang on Some Drums

The drum is arguably the single most important instrument in Native American culture. Drums carry the heartbeat of Mother Earth. As a result, their sounds help connect us both to the spirit world and to one another. Many tribe members even believe that drums possess their own powerful spirits.

Traditionally, drums were made from wooden frames. Then, they were covered with animal hides made taut with sinew. Drums come in all sizes, and the songs vary by tribe. But the special place drums hold in tribal culture is widely similar.

Large drums, played by several people at one time, are quite impressive. This video offers a great example.

Some websites, like this one, provide links to authentic American Indian drum crafters if you’re interested in purchasing one.

8. Get in Touch with the Land

In the worldview of Native Americans (and other Indigenous peoples), place is not a location or a patch of land to be owned. Instead, place is a sacred part of who we are, what we remember, and how we perceive.

Our place has the ability to speak to us, in a profound way, and can serve as a conduit for the guidance of our ancestors and the Great Spirit.

Given all that, one of the best ways to honor Native American Heritage Month with kids is to connect with the land in some way.

Pick apples, decorate pine cones, jump into a pile of leaves, or just stand outside and breathe in the crisp fall air.

Nearly all Native American cultures recognize the four cardinal directions – East, South, West, and North. Most also include up (Sky) and down (Earth). And some even include a seventh: our inner direction.

So, stand outside – in the sun, in the rain, in the fog – and spin around slowly. Look up. Look down. And look within. And then do something nice for the land.

This post offers just a few of the many resources that are available. A Kids’ Guide to Native American History (Chicago Review Press, 2009) by Yvonne Wakim Dennis and Arlene Hirschfelder is another amazing book that features over 50 activity suggestions from tribes across the U.S.

There are also lots of authentic picture books for kids. Pragmatic Mom put out a great Top 10 list a couple of years ago.

Since then, a few new books have been published. They include a couple of bilingual books (Navajo-English and Ojibwe-English), as well as Fry Bread: A Native American Family Story

(Roaring Press Books, 2019) by Kevin Noble Maillars (auth.) and Juana Martinez-Neal (illus.). One of our favorites is Giving Thanks: A Native American Good Morning Message

And, you can’t go wrong with Joseph Bruchac, the prolific Abenaki writer, whose books have already been mentioned. He has written well over 100 books, many of them for children. In fact, he received the Lifetime Achievement Award from the Native Writers’ Circle of the Americas – 20 years ago!! And he’s still going strong!

10.  Remember Your Tweens and Teens

Last, but certainly not least, there are also plenty of resources for slightly older kids. There are several relatively short You Tube videos, like this one, about the history of the Native American people that are suitable for middle-schoolers and high-schoolers. And we really like this one about an Apache rite of passage for young women.

You might also want to consider full-length movies. Chris Eyre is a film-maker who is also an enrolled member of the Cheyenne and Arapaho tribes. He has made several films, but his 1998 film, Smoke Signals (rated PG-13), remains one of his best.

Dances with Wolves (rated PG-13), the 1990 Kevin Costner classic, is also an option. While not universally praised, it was widely acclaimed for its portrayal of the Sioux Nation. And, in 2007, it was selected for preservation in the U.S. National Film Registry.

is a thriller, based on a Native American legend, that features a young girl. 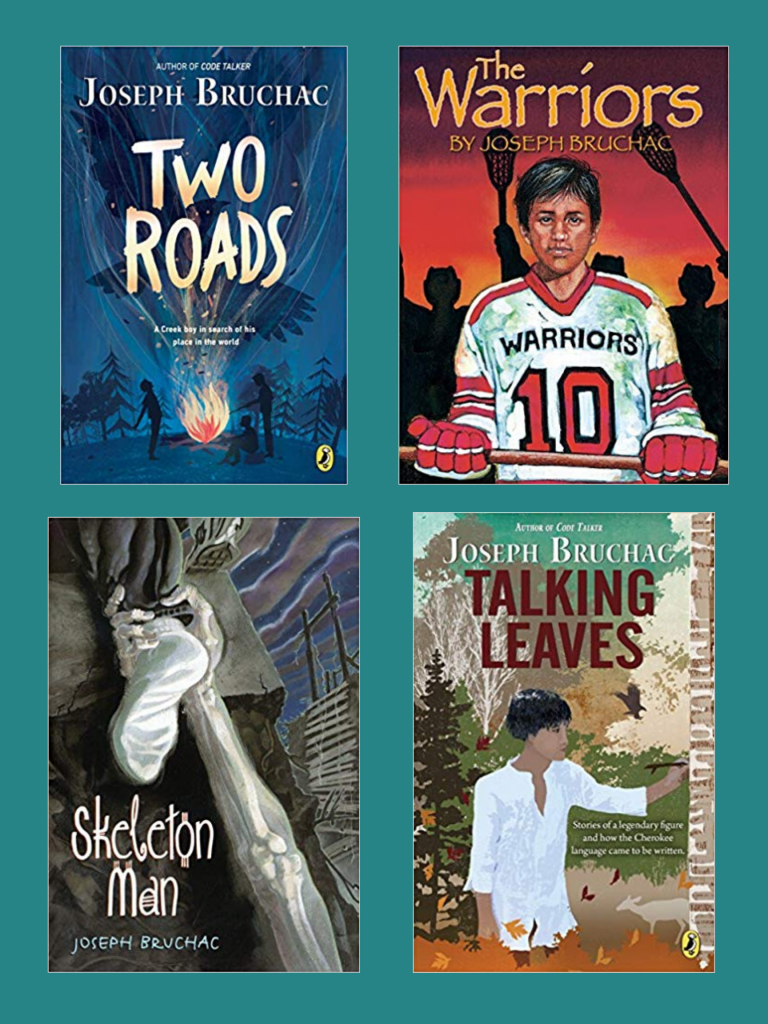 We are fortunate to live in a time when indigenous peoples from around the world are reclaiming their culture, land, language, and art.

One of the many benefits is increased access to their perspective and wisdom.

This article only scratches the surface of the accurate, respectful, and widely-available resources for you and your family and you have an entire month to discover them all!!

Many thanks to friend and colleague, Yona FrenchHawk, who read an earlier version of this post.

How do you honor the Native American Heritage Month with your kids?

Exploring the Mi’kmaq Culture with Quillwork

You Are Welcome at a Native America Pow Wow

Welcome to our sixth annual celebration of Native American Heritage Month! Today our bloggers are sharing posts about teaching children about these rich cultures. See the list of participating blogs below, and don’t forget to link up your own posts as well! Don’t miss our series from last year, 2017, 2016, 2015, and 2014, plus you can find even more ideas on our Native/Indigenous Cultures Pinterest board:

Founder at Faith Seeker Kids
Vicki Garlock's primary focus is interfaith education for kids. She is the founder of Faith Seeker Kids, a correspondent for The Interfaith Observer, and an editor for MCK Blogs. Her 4-volume interfaith Peace curriculum for kids age 3 through Grade 8 was recently published with Possibilities Publishing. Visit the Faith Seeker Kids web site or follow us on FB, Twitter, and Instagram!