New York State has lots to offer! Although the state is most commonly known for its largest city, there’s a lot to the rest of New York State that you may not know. Enjoy discovering these fun facts.

New York State is the third largest state in the US 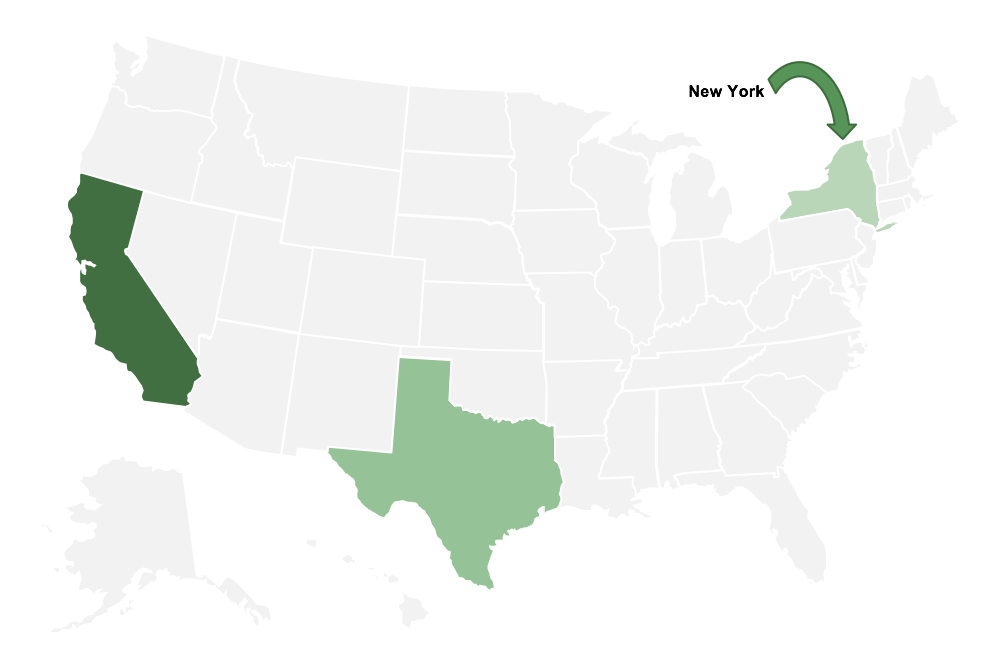 New York State has a population of over 19 million people and is the third largest state in the US behind California and Texas. However, almost half the population lives in New York City.

New York State has over 2,000 waterfalls—the most famous being Niagara Falls in Buffalo — and 7,600 freshwater lakes, ponds and reservoirs. New York also has portions of two of the five Great Lakes (Lake Erie and Lake Ontario) and over 70,000 miles of rivers and streams!

You can still drive boats on the Erie Canal

The Erie Canal, built in 1817,  connects the east and western parts of the state (from Albany to Buffalo). It remains an active boating route to get across the state.

Locks are located at sites of natural waterfalls, and their construction allows boats to ascend and descend safely. You can watch a time-lapse video of a boat ascending in the Lock E2 in the video below.

Not only is it part of state history and culture, but it’s a fun song to sing. Kids in New York learn about how canals operate, the lock system, and the economic boom that occurred once the trade was expedited on New York’s waterways.

Albany is the capital of New York State

Albany is one of the oldest surviving original European settlements from the thirteen colonies, and it is the second oldest state capital behind Annapolis, Maryland. It is said that Theodore Roosevelt often ran the steps of the Albany Capitol building to get in his daily exercise.

Modern toilet paper, as we know it now, was invented in 1857 in Albany by Joseph C. Gayetty who perforated the paper allowing it to tear easily and providing a way for folks to select the perfect amount.

More than one-fifth of the state — over 2.5 millions acres of mountains, streams, and woods — is protected under “Forever Wild” status (and has been since 1892).

The Adirondack Mountain range is HUGE

The Adirondacks are 6.5 million acres in size and one billion years old. In fact, the Adirondack mountain range is so big that you could fit Glacier, Yosemite, the Great Smoky Mountains, Yellowstone, and Grand Canyon national parks inside of it.

Lake Placid, New York is one of only three locations that hosted the Olympic games twice — in 1932 and 1980. Residents and tourists can ice skate on both original Olympic ice rinks and watch fun sporting events like the International Children’s Winter Games.

Harriet Tubman used her network of free and enslaved blacks and white activists to shepherd slaves to freedom from Maryland to New York. She purchased a home in Auburn, New York where she cared for her elderly parents.

Famous activist, Susan B. Anthony, lived and died in Rochester, NY. She played important roles in several social reform movements, including those focused on temperance, the abolition of slavery, and women’s suffrage.

Seneca Falls is the birthplace of the women’s rights movement

Seneca Falls is considered the birthplace of the women’s rights movement. Women’s rights activists like Susan B. Anthony, Matilda Joslyn Gage, and Elizabeth Cady Stanton conducted most of their activism in New York State. Their efforts finally paid off when New York passed women’s suffrage in 1917. Most of the US followed suit in 1920.

Native American tribes inspired many of the state’s place names

The Dutch were among the first European settlers in New York. However, many place names in the state were inspired by or translated from the 10 original Native American tribes that lived on the land.

Poughkeepsie — Derived from a word in the Wappinger language meaning, “the reed-covered lodge by the little-water place.” It refers to a spring or stream feeding into the Hudson River.

Schenectady — Derived from a Mohawk word, skahnéhtati, meaning “beyond the pines.”

Do you go on “vacation” or “holiday”?

The word “vacation” was invented in Lake Placid, NY. While Brits may go on “holiday,” the NYC elite — the Rockefellers and Vanderbilts — would “vacate” the city and head to the Adirondacks for fresh air and healing springs every summer. Since then, Americans go on “vacation” and Europeans go on “holiday.”

Have you been on vacation in New York state?