Have you ever heard of Obon? It’s a Japanese festival, similar to Mexico’s Day of the Dead. Celebrated for centuries, it’s a time to clean graves and create home altars as families welcome their much-beloved ancestors. While celebrating Obon is generally associated with Buddhism, it also includes elements from the more indigenous Shinto tradition, as well. 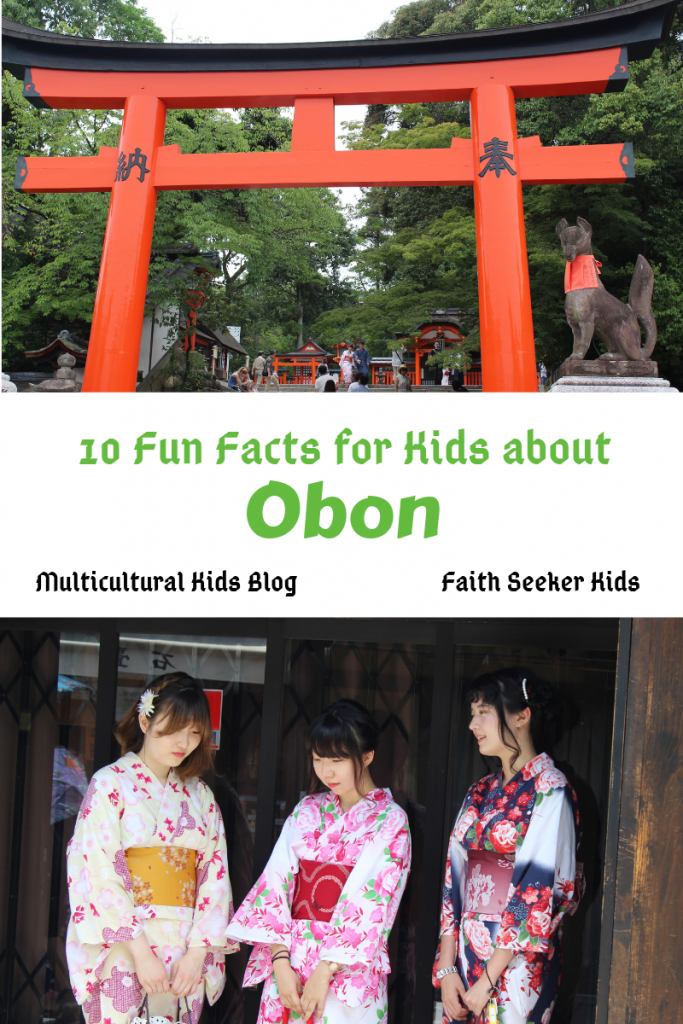 Nearly all customs associated with celebrating Obon are designed to attract the dead – a concept that can be somewhat creepy if you hold a more squeamish view of death. But for the people in Japan (and other places with deeply-held ancestor rituals), it’s a time to re-kindle and cherish connections with those who have already left the earthly realm.

Here are a few fun facts if you’re interested in sharing Obon with kids.

#1…There’s a choice about when to celebrate

Because Japan is an island, many people, especially those in the West, tend to think of it as a single culture. Obon, however, is celebrated at different times in different places. The most common time is mid-August. But, in the eastern prefectures, Obon is partly based on a lunar calendar, so it’s celebrated in mid-July. In the southern regions, the mid-summer dates for Obon vary a bit from year to year.

Wearing traditional kimonos is kind of “a thing” in Japan. Many “rent-a-kimono” shops can be found near tourist sites across Japan. And it’s generally Japanese tourists (young and old, male and female), who enjoy wearing the garments for a day. The photo above shows three young women who had rented kimonos for the day while enjoying Arashiyama — a tourist destination just outside of Kyoto. During Obon, the yukata – a casual, summer kimono – is often worn.

Everyone dances when celebrating Obon! Each region – and sometimes each neighborhood within a region – has its own Obon dance and its own song to go with it. Most dances consist of a few simple, repetitive steps, so put on some Japanese music and create an Obon dance (called a Bon Odori). Or, learn the steps to this popular Obon dance along with the revelers in this video.

#4…There are lanterns everywhere

Many holy days in Asia make use of lanterns, and Obon is no exception. Lanterns are often placed at a home’s entrance to provide a guiding light for deceased ancestors. (Fruits, vegetables, and other special foods placed on home altars serve the same welcoming purpose.) Lanterns are also used to send the ancestors on their way once again when Obon is over. Releasing lanterns into a river is becoming an increasingly popular end-of-Obon custom.

The lantern idea came to Japan from China, but the Japanese have certainly made it their own. The quintessential Japanese lantern is the chochin. They are often made with a bamboo frame that is covered in paper or silk. They are typically red or white in color and decorated with Japanese calligraphy. And they are often found outside Japanese pubs/casual eateries (known as izakaya). These lanterns become even more abundant during holidays, such as Obon. One of the most famous chochin in Japan hangs at Sensoji Temple in Tokyo.

#6…There’s transportation for the ancestors

#7…Transportation for the living is a bit more complicated

Obon is not a public holiday in Japan so, technically, everyone continues to work. In reality, many people use Obon as an opportunity to return home and visit family. The result is that Obon is one of the busiest travel times in Japan – similar to Thanksgiving weekend in the U.S. If you’re planning to be in Japan during one of the three Obon times, you should plan ahead and make reservations!

#8…The Buddha, himself, may have started it all

According to tradition, Obon began when one of the Buddha’s monks expressed his sadness to the Enlightened One. The monk had used his spiritual skills to locate his deceased mother. When he found her, she was suffering immensely in the Realm of the Hungry Ghosts. Upon the Buddha’s advice, the monk paid homage to a group of Buddhist monks, which resulted in her release. It also helped the monk recognize her earthly life of selflessness and sacrifice. The story goes on to say that the monk then erupted into a dance of joy. Remember the dancing?

#9…There are also fires

Who lights bonfires in the heat of August?! The Japanese, of course! Just like the end-of-Obon lanterns, bonfires are given the privilege of guiding the ancestors back to their resting places. The biggest bonfire ritual takes place on the hills outside of Kyoto. The event, called Gozan-no-Okuribi, meaning “five mountains,” involves lighting five bonfires that are in the shape of five different Japanese character-words on the tops of five mountains surrounding the city. This link has great photos and descriptions of the five character-words that are set ablaze. One of them is daimonji, which means “large.”

#10…It even happens in Brazil

Brazil is probably not the first country that comes to mind when thinking about a Japanese holiday, but Brazil is home to the largest number of Japanese people (over 1.5 million) outside of Japan. Many Japanese families who have been in Brazil for decades celebrate Obon on Nov. 2 – which is All Soul’s Day for Catholics. But more recent Japanese immigrants are now sharing the cultural roots of celebrating Obon – especially the dances – with a wider Brazilian audience. Of course, Obon is also celebrated by people with Japanese ancestry all over the globe.

Obon is a great way to teach kids about Japanese culture, Asian/Eastern faith practices, and ancestor rituals. YouTube also offers some fun videos of Obon celebrations across Japan. Obon: Invitation for the Dead, for example, is a really sweet video and shows how one Japanese family honors its patriarch during Obon.

Day of the Dead Around the World