Washington, D.C. is known around the world as the capital of the United States but there is so much to learn and explore here beyond politics! Many of America’s national treasures can be found in this diverse and exciting city. Did you know about Darth Vader gargoyle on the National Cathedral? Here are 10 Fun Facts about Washington, D.C. for Kids. 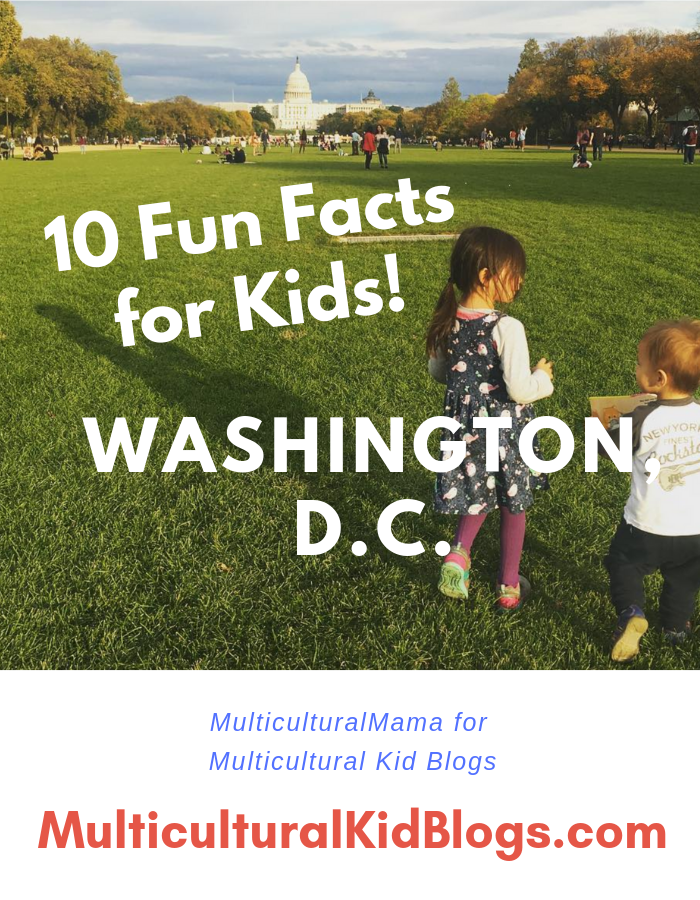 Part of the National Mall where the monuments are located used to be marshland and swamp. In fact, where the Washington Monument sits today is where Tiber Creek used to flow down present-day Constitution Avenue. Two U.S. Presidents even kept pet alligators at the White House (Herbert Hoover and John Quincy Adams)!

The White House was completed just a year after the first President of the United States died. In the beginning, the states of Maryland and Virginia donated 10 square miles to the federal government to create D.C.

3. Full House – President Theodore Roosevelt had 6 Children and TONS of Pets at the White House

Here’s a list of the kids’ pets living at the White House in 1901: Small bear (what?!), many dogs, a lizard, a pig, a badger, a blue macaw, guinea pigs, a garter snake, a one-legged rooster, a barn owl, a hyena, a pony, a rabbit, and a hen named Baron Spreckle!

4. The Smithsonian is Actually 19 Museums + a Zoo

If you said “take me to the Smithsonian” to a taxi driver, you might get a confused look. There are 19 museums and a zoo that comprise the world’s largest museum and research institution. Last year there were nearly 29 million visits. The best part of all is that these national treasures are all free. My family created a Smithsonian Bucket List challenge last summer and visited more than half of the D.C. museums. We wrote up some of our tips for the Air and Space Museum (most visited museum in the U.S.) and the National Zoo. Some famous treasures to explore: Hope Diamond at the Natural History Museum, touch a real moon rock at the Air and Space Museum, see the First Ladies Gowns at the American History Museum, and enjoy different American Indian food at the American Indian Museum.

Well, I guess not actually visiting the countries themselves.  There are 170 embassies and international cultural centers which are technically considered “foreign soil” in D.C.  Many embassies open their doors to visitors on a weekend in May for Embassy Day which is a fun way to learn about other cultures without hopping on a plane!

Activity: What embassy would you like to visit someday? Look up if there is an embassy near where you live, and see if they offer tours. Or if you are visiting D.C. check out the Embassy map to see which ones you would like to visit.

Starting from the founding of the city in 1791, African Americans have played an important part of the city’s history. In fact, in 1900 D.C. had the largest percentage of African Americans in the United States than any other city.  You can check out the African American History Trail which shows famous areas of the city. Many national leaders lived in D.C. including Frederick Douglass, Langston Hughes, Duke Ellington, Marvin Gaye, and Mary Church Terrell.

7. D.C. has Famous Cherry Blossoms and a Kite Festival

One hundred years ago, the Japanese government donated over 3,000 cherry blossom trees which were planted around the monuments. Each spring, D.C. goes pink and celebrates the blooms of these beautiful trees. There is also an amazing Kite Festival were professionals and regular folks fly hundreds of kites on the National Mall.

There are miles and miles of the Senate Subway for senators and members of the House to use between their offices and the Capitol building. Some visitors can ride on the trains but only during a tour of the Capitol Complex and only when escorted by a staff member.

Activity: Look up “Senate Subway Train” on YouTube and watch politicians riding the rails between the Capitol and their offices!

9. D.C. Gets More Rain Than Seattle

Hopefully, this doesn’t dissuade you from visiting our beautiful city, but D.C. averages 39 inches of rainfall. This is 2 inches more than Seattle! The good news is we have wonderful free indoor places to explore like the Smithsonian Museums free daily shows at the Kennedy Center and foodie heavens of Eastern Market and Union Market.

10. The Largest Library in the World

The Library of Congress has more than 168 million objects in its possession. While there are many buildings that house these books and other artifacts, you can visit the main Thomas Jefferson Building across from Congress every day except Sundays. Other fun facts include:

I hope you enjoyed these 10 fun facts about Washington, D.C. and learned something new about the capital of the USA. Did you know any of these facts?

Jennifer blogs at MulticulturalMama and creates Family Trip Guides for the Smithsonian Museums in DC at FamilyTripGuides.com. A global nomad as a child, (lived in Germany, the Netherlands, Egypt and the US) she finally found her “home base” outside Washington, D.C. with her Taiwanese American husband and two children. She writes about celebrating cultures and the joys of travel with kids.

Latest posts by Jennifer (see all)