How much do you know about Latvia, the small country by the Baltic Sea? Learn about this fascinating little country through these 10 fun facts about Latvia and explore more through the suggested activities.

The Republic of Latvia lies in the north east of Europe and is home to roughly 2 million people. Around one third of them live in the country’s capital, Riga. Latvian is the official language but a considerable minority speaks Russian.

Activity: can you find Latvia on a world map? Which are its neighbouring countries? 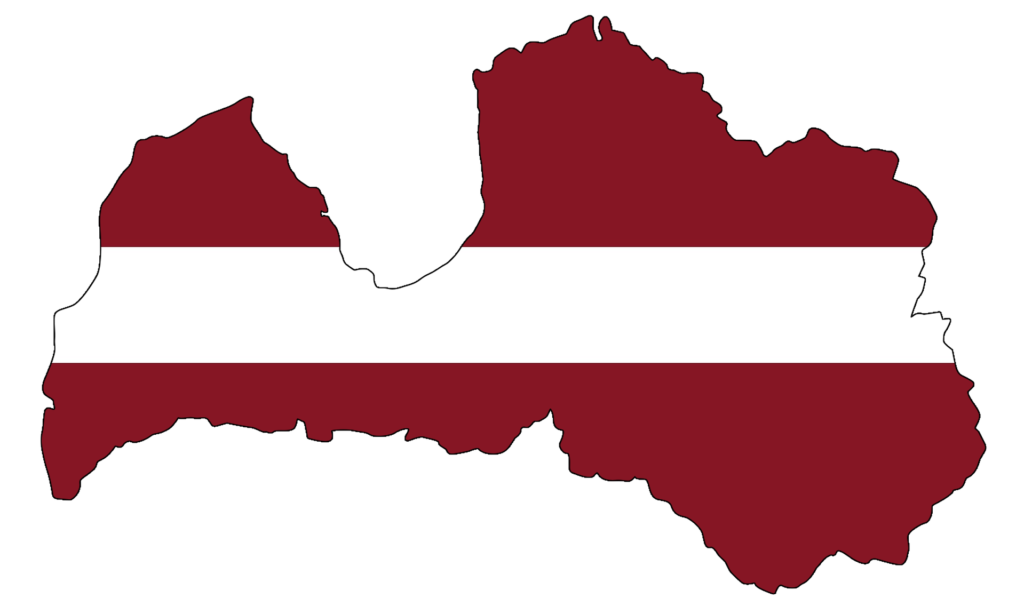 10 Fun Facts about Latvia for Kids

1. Latvia’s flag is one of the oldest in the world

Even though the state of Latvia was only founded in 1918, its flag dates back to 1279 and is one of the three oldest in the world. According to one legend, the leader of an ancient Latvian tribe was mortally wounded in a battle and wrapped in a white sheet. Blood stained the sheet’s edges while the part on which he was lying remained white. In the next battle his tribe used the blood-stained sheet as a flag and was victorious.

Activity: find out which country has the oldest flag in the world. Is there also a legend associated with it?

2. Latvia is among the world’s greenest countries

Over half of Latvia’s territory is covered with forests and one fifth of the country comprises protected nature areas. Among others, there are four national parks, 42 nature parks, and 260 nature reserves. Add to that 500 km of white sand beaches, 12,000 rivers and over 2,000 lakes, as well as unique wildlife and you’ll probably understand why this small country is a popular destination for nature lovers.

The capital of Latvia is the beautiful Riga, founded in 1201. Churches in Riga’s historic Old Town are unlike any other for a curious reason: instead of crosses, golden roosters adorn the church towers. Why, you may ask? In truth, nobody knows exactly. Practically, the roosters double as weather vanes showing the direction of the wind – quite important for a bustling harbour city!

4. In Kuldīga, you can catch flying fish

In the charming small town of Kuldīga lies the Venta Rapid, the widest waterfall in Europe and a place where fish fly. Every spring and autumn fish, such as salmon, swim upstream to breed and try to jump over the rapids. Three centuries ago Duke Jacob (more about him later) invented a clever way to easily catch as many as 100 salmon a day – by placing baskets along the rapids and letting the fish jump into them.

5. Ice hockey is the hottest sport

While some nations are passionate about football / soccer, basketball or cricket, the holy sport in Latvia is ice hockey. Latvian hockey fans pride themselves as the best ice hockey fans in the world and call it simply ‘hockey’ because the other types simply don’t matter here. In addition to the national team and a lively local league, there is an ice rink in every small town, allowing everyone to try their hand at the country’s most popular sport.

Activity: which sport do you think is the most popular in the world? And how can that be determined?

6. Latvian women are the tallest in the world

A recent study comparing the height of people in over 200 countries found that, with their average height of 170 cm (5ft 7in), Latvian women are taller than ladies of any other nation. While Dutch men were the tallest, Latvian gentlemen were not far behind and took the 4th place worldwide.

7. Latvians love to sing and dance

Latvians are a nation of singers and dancers with hundreds of thousands of people participating  in choirs, folk dance groups, folklore collectives, orchestras and amateur theatres across the small country. Every five years the best 40,000 amateur song and dance collectives come together for the Nationwide Song and Dance Festival. This impressive event has taken place since 1873 and is part of the UNESCO Oral History and Non-material Cultural Heritage.

Activity: can you imagine what a choir of over 15,000 people sounds like? YouTube and Vimeo can help! You can start with the unofficial Latvian anthem or this folk song and also hear how the Latvian language sounds.

Decorating a fir tree is an old winter solstice tradition, observed by most northern Europeans. However, the first decorated Christmas tree on record was one in Riga back in 1510. People adorned it with straw ornaments, ribbons, dried flowers and weave, sang and danced, and burned the tree afterwards for good luck. Later this tradition spread to Germany from where it conquered the rest of the world.

9. Summer solstice is the biggest celebration of the year

While Christmas is mainly a quiet family celebration, the summer solstice is where the real fun happens because Latvians flock to the countryside to celebrate the shortest night of the year. They stay up until dawn and light bonfires, make wildflower wreaths, eat and drink, sing and dance. Celebrated on the night from the 23rd to the 24th June, this ancient festival is called “Jāņi” or “Līgo”, and involves a number of superstitions and rituals.

Activity: read about the folklore and customs of celebrating midsummer like leaping over the bonfire and bathing in morning dew. Would you be willing to try any of them?

10. Latvians are adventurers and explorers

Over the centuries many Latvians have wandered out into the world and achieved some remarkable feats. Back in the 17th century, Latvia, then the Dutchy of Courland and Semigallia ruled by the aforementioned Duke Jacob, was notably the smallest country to own colonies – the Caribbean island of Tobago and the Kunta Kinteh Island in the Gambia River, Africa.

The tailor who invented jeans – Jacob Davis – was born in Riga and emigrated to the US where he sewed the first pair of jeans trousers and patented them together with Levi Strauss. The Latvian Aleksandrs Laime was the first human who reached the Angel Falls in Venezuela, the tallest waterfall in the world. And the last of the fun facts about Latvia: Crocodile Harry, Australia’s most famous crocodile hunter and inspiration for the Crocodile Dundee movies, comes from Latvia.