Having moved from Ireland to Portugal we have not only had to adapt to the obvious changes (new language, culture and of course the weather) but also to an entirely new outdoor world. Our family outings have led to many fascinating outdoor learning adventures. 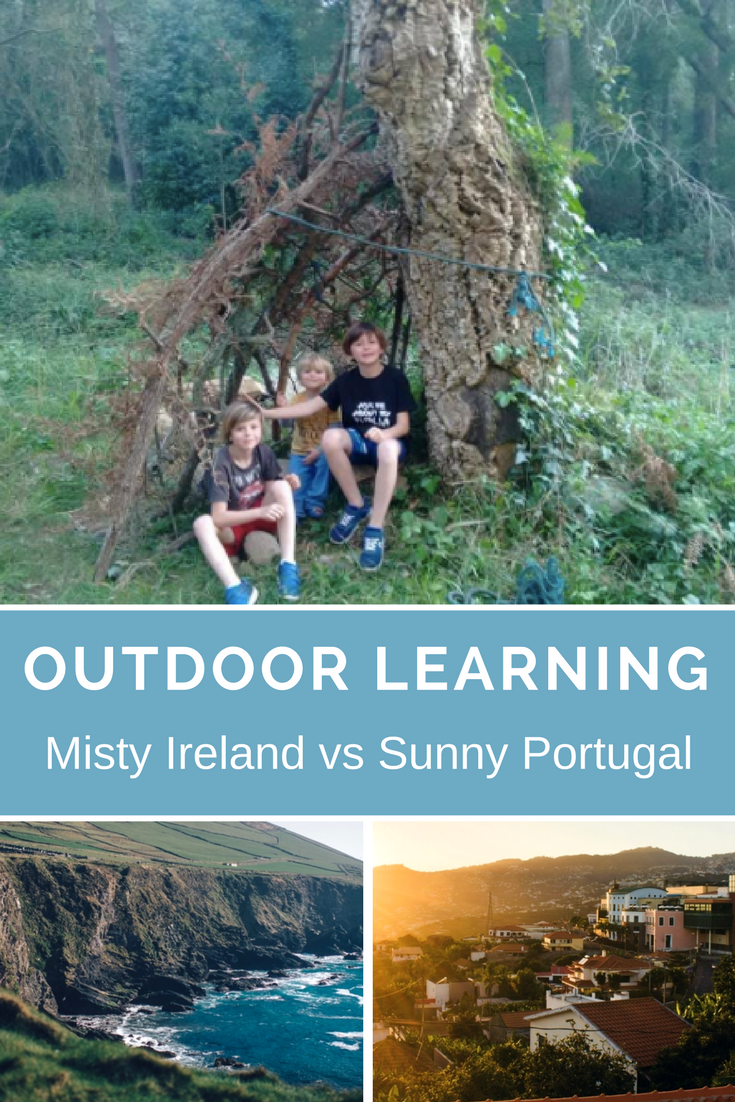 Outdoor learning in Ireland is pretty much a mixture of over-priced ‘Pet farms’ and the rugged wild nature for which Ireland is so famous.

The climate means that I always had a ready supply of spare clothes, shoes, wellies, towels, jackets, umbrellas, sunglasses, and beach toys in the boot of my car.  The country of 4 seasons in one day; rain can and will fall 360 days of the year (on average), the sun will then claim its turn, and shine so brightly the need for hats, sunscreen, and glasses presents itself within minutes, only to be followed by a shower of hailstones an hour later.

Amongst other places, we explored the mountains and lakes of Kerry, the Cliffs of Moher and the Burren in Clare, the caves in Michelstown, and the many castle and church ruins dotted around the Emerald Isle.

We splashed in an infinite number of muddy puddles, caught hundreds of crabs from piers using a piece of string and some chicken, picked blackberries for jam, daffodils for salads, and learned about evergreens during our forest walks. 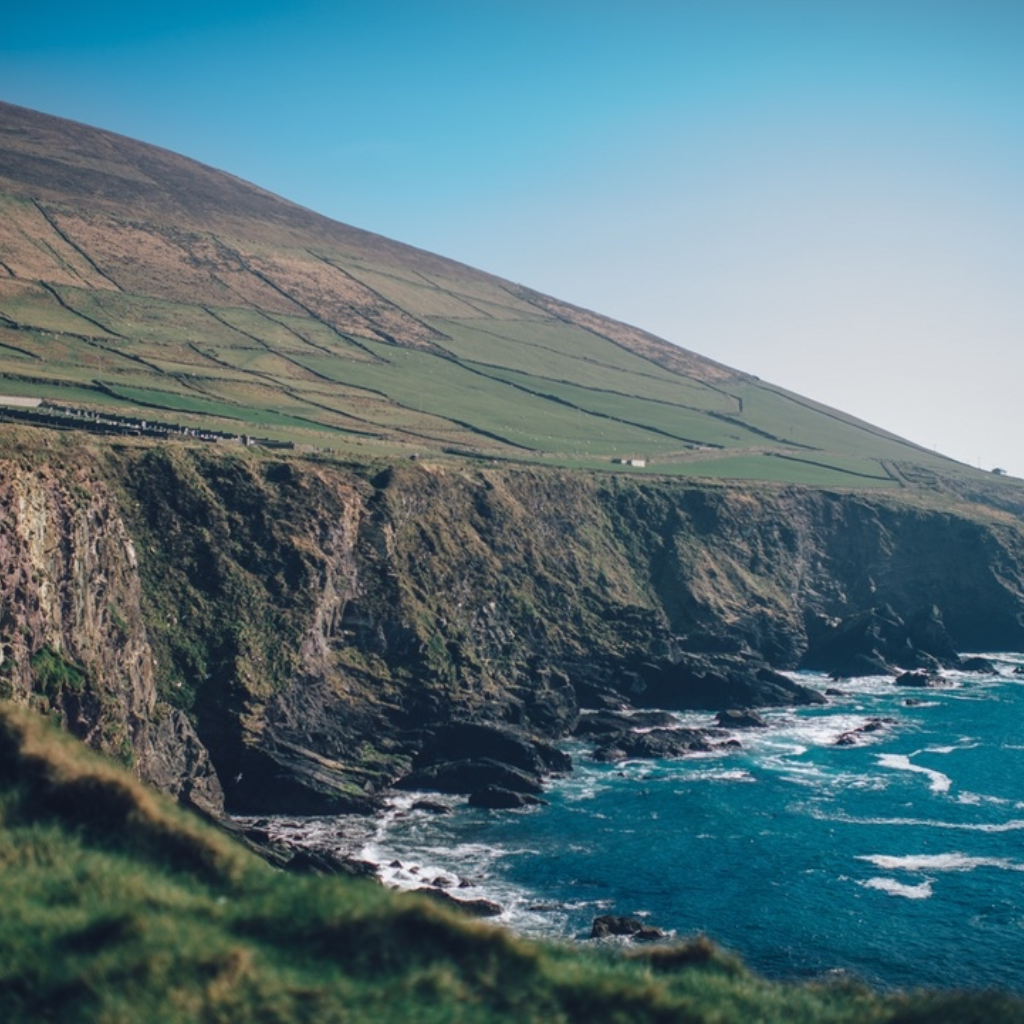 The climate being what it is, most outdoor learning is centered around farm animals such as donkeys, sheep, cows, and chickens. The flora is also relatively limited, although we were lucky enough to live in the very south of the island where some palm trees survive despite the incessant rain.

The most unique outdoor learning experience to be found in Ireland is the harvesting of the peat. Using a long, thin shovel with a square end for digging up and cutting the turf, it is piled up to dry and eventually taken home to put on the open fire in your living room. The unique, sweet smell of peat fires instantly invokes a sense of nostalgia for Ireland, as well as a vivid image of the cold white mist rolling in from the Atlantic, giving the landscape it’s magical appearance and chilling you to the bone.

With the children in tow, going outside in Ireland usually meant going for a walk/hike or finding a place where indoor activities were also possible. The local park was just a few fields with some goalposts and flanked by a river for paddling in the summer. The playground was usually locked (for fear of vandalism) and only usable a few days per year due to the rain anyway.

Pet farms it is then. For roughly 50 euros a family of four can enjoy the delights of the farm animals, even feed some of them (at an extra cost), and play in a barn with a sandpit and some farm related play areas.

After a few months of living in Portugal we were invited to come along to a Quinta Pedagogica (the Portuguese equivalent of a pet farm). I hesitated, memories of Ireland still very fresh in my mind, but decided to go just to be able to compare, if nothing else.

It turned out that Portugal is almost the polar opposite to Ireland in more ways than just the weather. The pet farms here are mostly free and provide lots of free information, organised walks, and workshops for children of all ages to learn about the seasons and the flora and fauna of Portugal.

The parks here are filled with fruit trees laden with fruit and free for the taking. The indigenous animals include turtles, peacocks, parrots, and a whole array of birds in every colour of the rainbow, as well as the ‘usual’ ducks, geese, and chickens.

The playgrounds are varied and offer a challenge for children of all ages, most parks also provide a feeding station for the park wildlife as well as organised events throughout the year to learn through play and discovery. We attended a free light festival in one, featuring artists from all over the world using recycled materials and learning about glow worms, electric eels and other natural light sources. Other times we simply enjoy reading the name tags for each tree and bush along the paths. 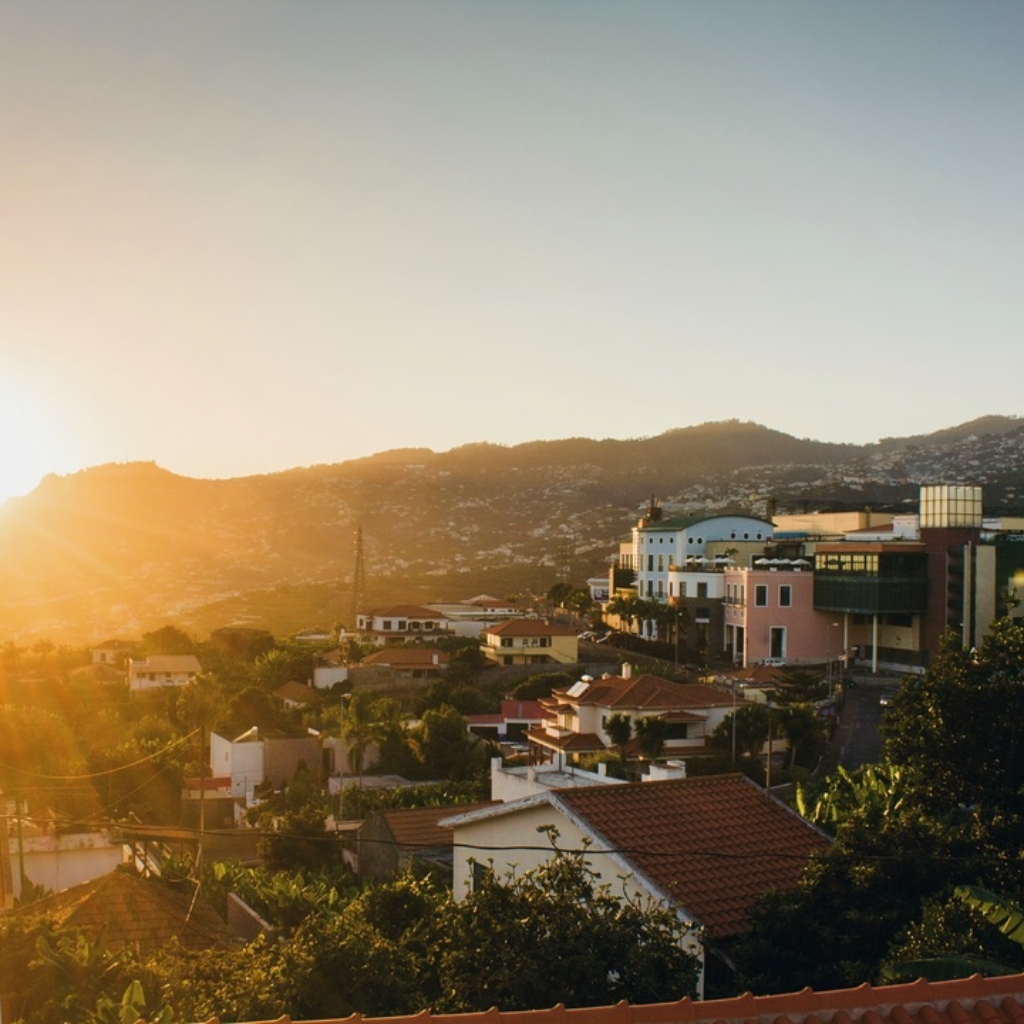 We have been here nearly a year now and every time we step outside we discover something new. The town councils use fragrant herbs as evergreens in the flowerbeds lining the streets. Sage, thyme, rosemary, and lavender are the norm. The trees providing the shade are more often than not lime, lemon, orange, and pomegranate trees.

The forests are a mixture of pine, eucalyptus, olive and cork trees. Smelling the Eucalyptus trees, trying to figure out if the smell comes from the bark, the leaves or the seed pods is a simple yet amazing thing to do!

We have discovered wild garlic, fennel, celery, carrots and tons of edible flowers along our walks. I am amazed every day by the sheer volume of edibles available around us in comparison to what we are used to from our time in Ireland.

Foraging has now become a big part of our outdoor learning curve and as I write I am facing a pile of various pieces of bark from the cork tree, a bucket filled with wild oranges and lemons (some of the oranges give the lemons a run for their money in the sourness camp, it has to be said!) and my toddler is happily chewing on the stalks of a local flower claimed to have the equivalent of 3 oranges in Vitamin C within its sap.

But it is not just about the flowers, fruit, and wildlife. During our excursions we have stumbled upon many places of local and historical interest, fuelling a drive for learning more about this country’s rich history.

During a walk along a small, local beach we decided to follow a narrow path which led up onto the cliffs. Once at the top we noticed what at first appeared to be the remains of an old cottage. Turns out it was the site of an ancient Roman temple worshipping the ocean, the moon, and the sun as well as an Islamic Ribat!

Of course there are sites of historical interest in Ireland as well. The fun for us here though is the unexpected, the myriad of narrow lanes seemingly leading nowhere then suddenly revealing an ancient stone arch, a temple site, or even a hidden traditional hamlet.

We have also recently begun building our own dens in the forest, applying basic physics and maths skills, and working together as a team. Although Mr. Toddler more often than not prefers to be a lone wolf! 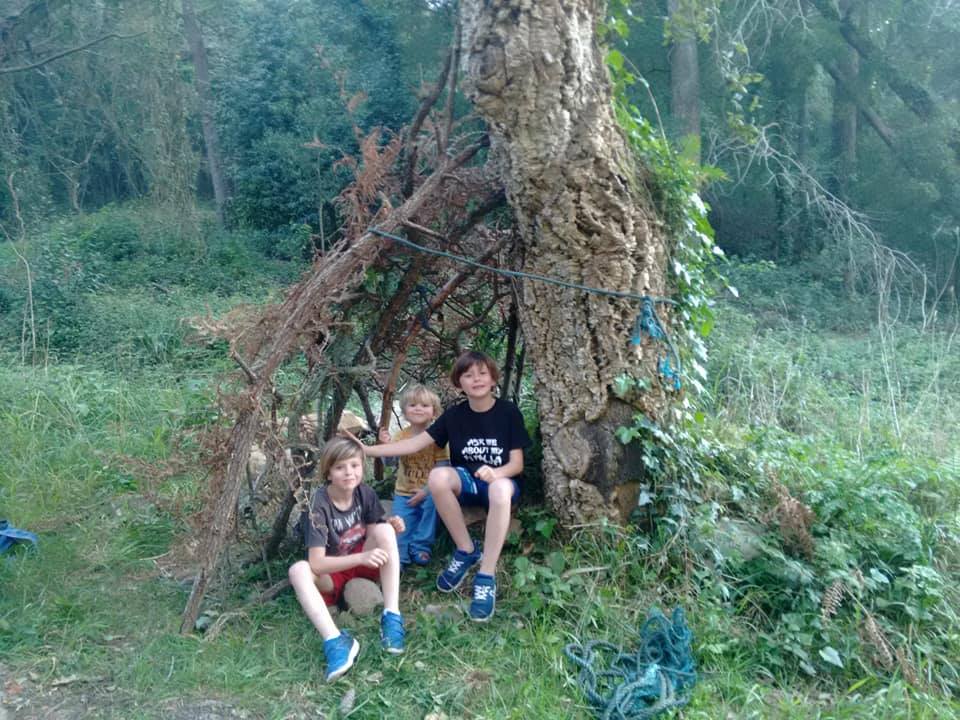 We bring home samples of plants, fruits, nuts, feathers, and pictures to try and identify once we get back home to Mr. Google. Outdoor learning has become a huge part of our lives and being able to learn with my children is the best thing of all.