Critical Race Theory has brought some heated discussions these days. It is important that we know what it is. But it’s also important that we know how to respond to, and deal with, ideas that might be uncomfortable or difficult for those in the room. We are so grateful that Homa Sabet Tavangar is sharing this post with ways to respond to those who are anti-Critical Race Theory. 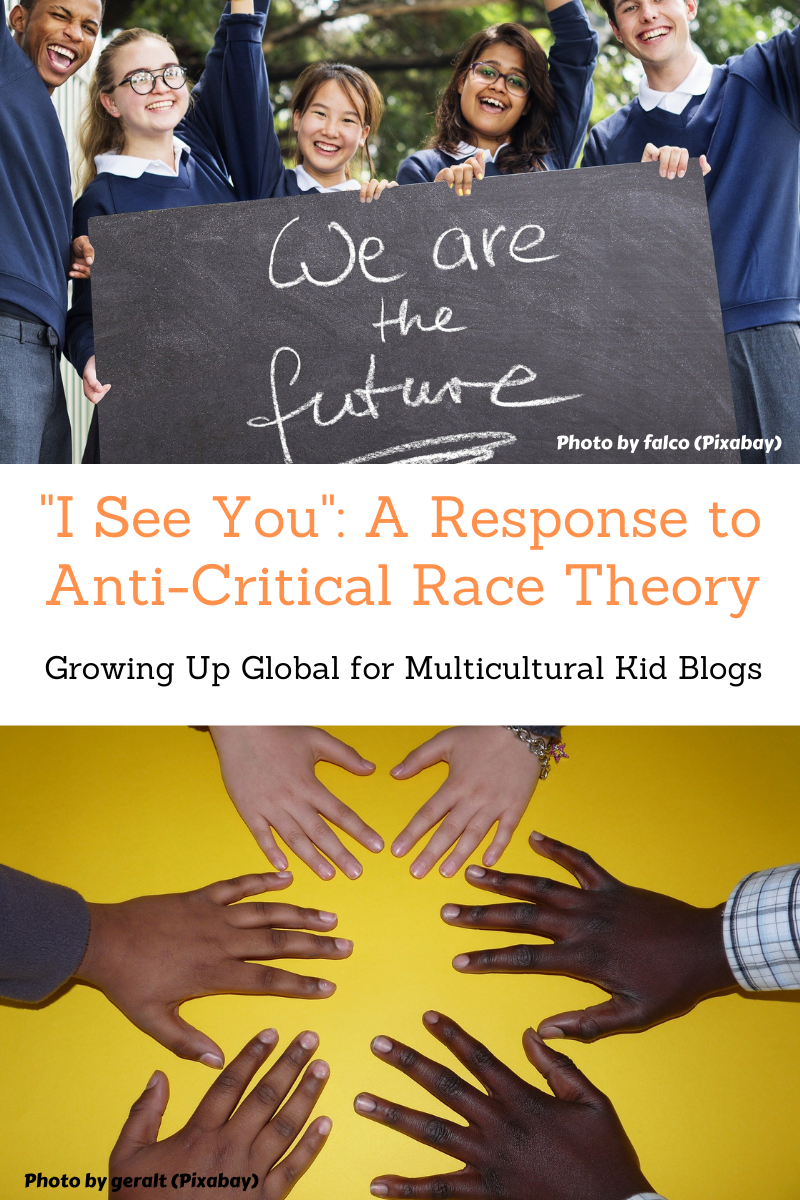 This fall, at the end of one of our first in-person conference presentations, amidst the buzz of actual human interaction and reunions among colleagues from various cities, one woman hung back until all the other participants’ questions had been asked. Then she confided: “I’m struggling because people at my school have become so divided about even bringing up the topic of race.” I responded with what I thought was a totally benign reply: “As a leader at your school and as a Black woman, that must be especially hard…” This powerful woman then broke down: “Thank you for seeing me, for acknowledging me,” she said between tears. I was taken aback. “That is the least I can do – to see you…”

The emotions that overflowed at that moment reflected the polarization and politicization that is building across the country around Critical Race Theory (CRT), a false bogeyman that is not even taught in K-12 schools. As I’ve seen across the United States, and in my own community, activists against teaching anti-racism, diversity, equity, and inclusion are being supplied talking points by politically driven groups. Those of us interested in responding could use some talking points of our own. 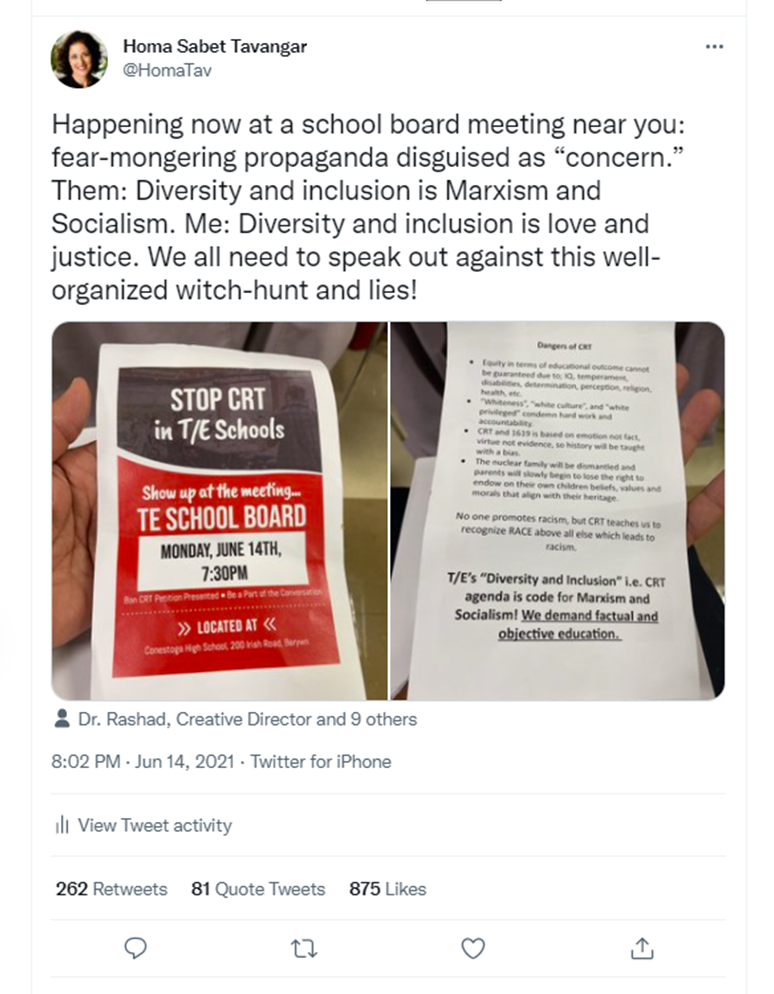 How to Respond to Anti-Critical Race Theory

Responding to divisive points through a lens of science, honest history, and compassion might help advance us beyond simple “us” versus “them” dynamics. In addition, it might avoid “cancelling” each other out. Instead of fleeing from uncomfortable conversations, it is better to stay in the room and strive to “see” each other better.

Here are a few common “anti-CRT” talking points and my own responses to them. Instead of being partisan, they focus on respect for humanity.

My take: Anti-CRT activists advance the idea that those who speak up about racism are simply creating more problems. This line of thinking contends that racist behavior must be malicious and intentional (think KKK or white nationalists) for it to be objectionable and hurtful.

In fact, research demonstrates that when it comes to race, ignoring it makes the situation worse. Parents often try raising their children to be “color blind.” With it, comes the intention of being accepting and loving toward all people. But we aren’t “color blind.” Nor can we pretend to be.

The truth is, we can be loving and accepting AND see color.

As I explain to the youngest children, we are all like flowers of a garden. I love all the different colors, shapes, fragrances and types of flowers. The variation makes the garden beautiful, so we need to celebrate difference, not ignore it.

When diversity is ignored, people of all ages may feel unseen and invalidated. And feeling invisible or inauthentic is stressful. Sadly, the school leader who broke down at the end of our session is living that reality.

Not only is “seeing race” not racist, but denying race (i.e., asserting colorblindness) has been shown as the number one way to raise a racist child. Avoiding the term or the topic sends children the message that race is bad or taboo. Race, itself, is not bad; racism is. 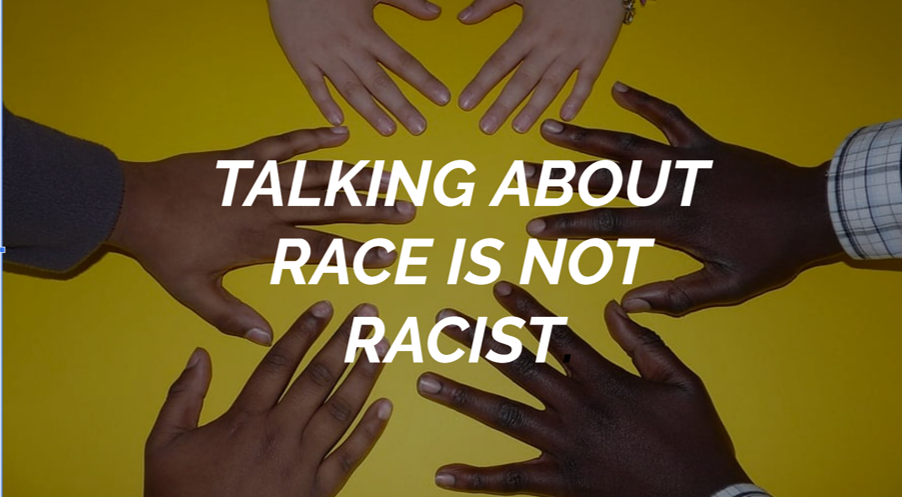 CRT teaches white children to be ashamed of themselves. My child doesn’t deserve that.

My take: When children and adults learn about stories of racial injustice, it is natural (and healthy) to feel sad, uncomfortable, or even ashamed. But that doesn’t need to be the end of the story. Acknowledging those emotions can lead to compassion, purpose, empathy, and empowerment. If you (or your child or your student) feel ashamed by these stories or honest history, consider:

If you are a teacher, these quick suggestions might be used as a starting point for lesson planning and communicating with parents. If you are a parent, you can use them as a guide for reflection after reading a story rooted in racial, or some other form, of injustice.

My take: Getting clarity on terms helps diagnose a situation with honesty.

An example of ingrained bias in society is to assume that “Whiteness” is the neutral starting point. For instance, when we say “an executive” who might you think of? What about “a Black executive”? Pointing out “Whiteness” is not a condemnation of anyone, but a fact. Recognizing that one has “White privilege,” or any sort of privilege, as Peggy McIntosh’s classic essay White Privilege: Unpacking the Invisible Knapsack illustrates, unveils a truth that allows for reconciliation to follow.

At the Oneness Lab, we have developed a “heat index” of terms for building racial literacy, acknowledging that some may be uncomfortable using certain terms, especially those involving “Whiteness.” When we recognize that some words carry more heat, emotionally and historically, it helps us to stay in the room, listen when it gets difficult, and clarify terminology even as the heat rises. Clearly, this calls for courage and patience during challenging conversations. We need to learn new skills for communication so we can work toward justice and belonging. We should do this for everyone in our communities. 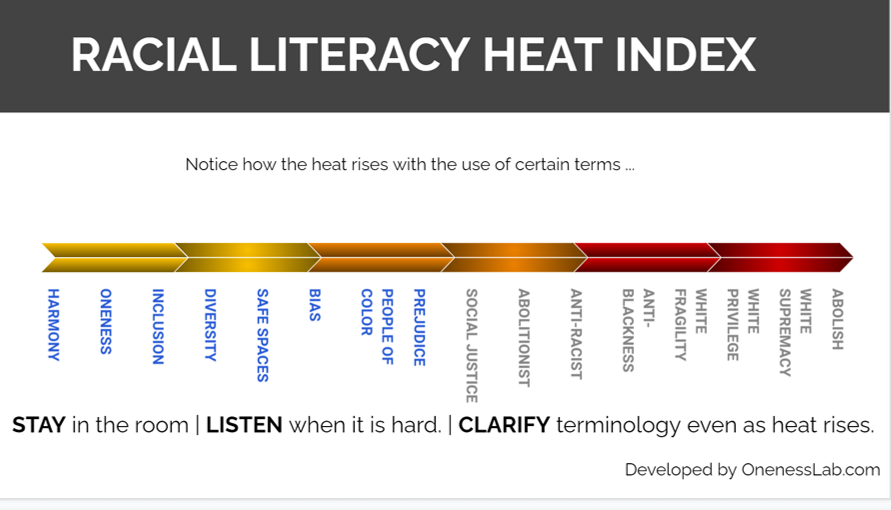 The newly elected Virginia governor vowed, “On Day 1, I will ban critical race theory in our schools,” and the backlash to anti-racism feels loud. But national polling suggests a turning tide. Currently, 76% of Americans (71% of whom were white) say racial and ethnic discrimination in this country is a “big problem.” Five years ago, the results were at 51%. That means change is happening. When the Gallup poll tracked opinions on interracial marriage, opinions swung from near-universal disapproval (4% approved of marriage between a Black and white person in 1958) to almost-universal approval (94% approved in 2021). This represents “one of the largest transformations in public opinion in Gallup’s history.”

Such transformations of view offers great hope. The educator, moved to tears simply for being acknowledged, taught me something: We need to stand up for each other. We’ve got to learn and contribute with our whole hearts. We must listen, speak, and see as an act of courage. And we need to honor everyone. Now is the time. The world needs us to make history.

Author, Growing Up Global: Raising Children to Be At Home in the World (Random House/Ballantine Books) and The Global Education Toolkit for Elementary Learners (Corwin Press, 2014), www.growingupglobal.net