Discussing intersectionality with our children is a haunting idea that terrifies parents and educators around the world. However, having this conversation with our kiddos is highly necessary if we want to raise inclusive adults for the future. 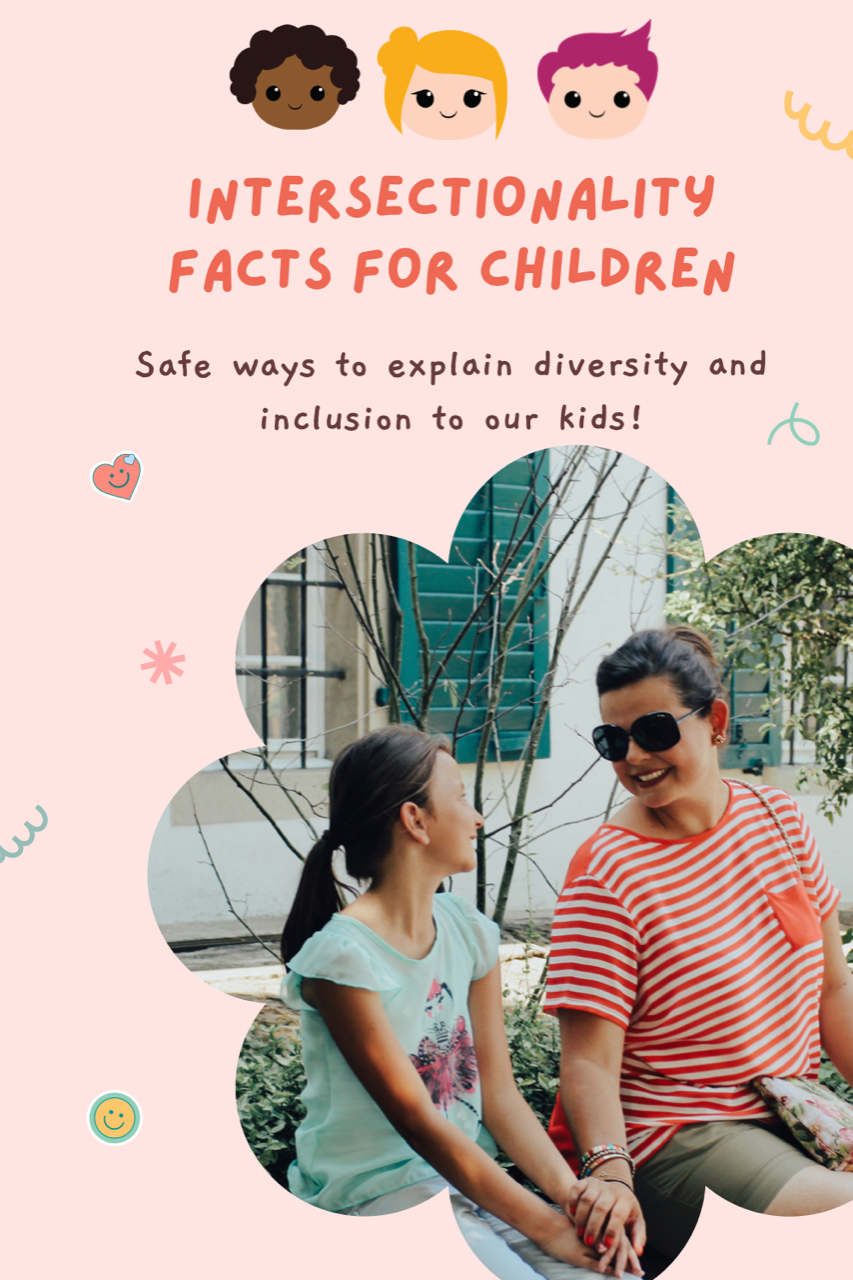 As a first step, it is important to inform ourselves about the concept of Intersectionality and its reach in society.

Intersectionality is the relationship between the many different ways that people are kept in a lower social position, controlled, and left out of important parts of society because of their differences.

Kimberlé Williams Crenshaw gave the name “intersectionality” to this concept in 1989.

Call Things By Their Name

As parents and educators, we cannot be afraid of teaching our children about diversity, inclusion, and discrimination. More importantly, we need to give our kids the tools to speak up against discrimination by calling things by their name. Furthermore, be open about the reality behind the word intersectionality.

Open the conversation by talking about this issue in a way that your child can understand. Instead of giving a complex definition, tell children that intersectionality is a way of thinking about power, privilege, and oppression. It takes into account a person’s combination of social identities (like gender, race, class, sexuality, ability, religion, and more) rather than considering each of them separately.

Instead of isolating a woman’s oppression based on sexism alone, or a black person’s oppression based on racism alone, intersectionality looks at how those identities intersect and overlap to generate oppressive forces of sexism, racism, and homophobia/biphobia all at once rather than separately. One clear example of intersectionality is the violence suffered by many black women in their professional journeys and careers. Many of these women experience sexism, racism, or both at the same time.

Historically underrepresented in academic institutions, and particularly in the fields of science, engineering, and mathematics (STEM), women and people of color have been gaining ground in recent decades, though there is still much room for improvement and continued work.

An inspiring story to share with children to explain intersectionality is the life and career of Mae Jemison. Jemison is an engineer, physician, and astronaut. In fact, she was the first African American woman in space. How cool is that?

The first woman of color in the world to go into space, Dr. Jemison served six years as a NASA astronaut. Aboard the Space Shuttle Endeavour, STS-47 Spacelab J mission in September 1992, she performed experiments in material science, life sciences, and human adaptation to weightlessness. Prior to joining NASA, she was a general practice physician in Los Angeles and then the AREA Peace Corps Medical Officer in Sierra Leone and Liberia. She is an icon in the women’s rights and civil rights movements.

“Growing up, I always assumed I would go to space. I wanted to do lots of things: be a scientist, a dancer, a policymaker. I would make a difference in what happens in the world, and I knew that I could.” – Mae Jemison

Mae Jemison faced many roadblocks to her dreams of pursuing science. Once, when Jemison said she wanted to be a scientist when she grew up, her teacher asked if she meant a nurse. She later founded The Earth We Share (TEWS), an international science camp that encourages science literacy for all.

Navigating The Intersections With Children

An identity-based discussion that directly focuses on layers of oppression might seem too difficult to navigate at home or in class. However, we need to remember that raising these issues is a way of privileging our children’s identities, experiences, and stories. Create a safe space to hear your kids or students talking about race, gender, and other identity layers without judging and with a big umbrella of empathy. Offer to answer any questions they may have and be prepared to be challenged and uncomfortable.

Parents and educators can start the conversation by encouraging children to examine their own identities, including times they’ve experienced judgment and bias. Invite them to speak up about the ways in which they’ve exhibited bias against others. By emphasizing intersectionality, we give children the skills to examine why they believe what they believe, why their beliefs might differ from others, and determine how their beliefs might be influenced by power and privilege.

Finally, do not hesitate to look for support for discussing intersectionality with your children. There are tons of resources and tools online to equip yourself with valuable information to take the first step to create a better world!

Teaching Kids About Diversity Through Dignity, Value, and Respect