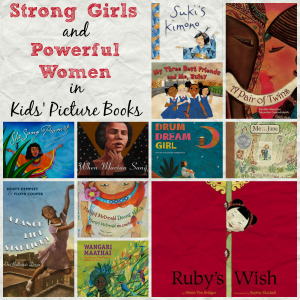 March is Women’s History Month and we’ll be celebrating all month long at Multicultural Kid Blogs! We’re kicking off the party with a look at picture books that feature female role models of various ethnic and cultural backgrounds. Some are fictional and others introduce kids to real women. All provide kids with a window through which to meet (and perhaps emulate) strong girls and women from all walks of life. Come travel with us across the globe to meet these amazing females! 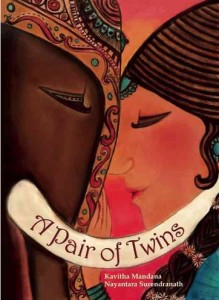 A Pair of Twins by Kavitha Mandana and Nayantara Surendranath

Lakshmi, a female elephant, and a young girl named Sundari are “twins” in that they are born on the same day. They grow up together, forming a special bond, as Sundari develops into an elephant caretaker of significant talent. At the same time, Lakshmi becomes a powerful successor to her father, the bull elephant Drona. When Drona is too old to lead an important procession, Lakshmi is chosen to stand in, with Sundari as her “mahout,” or rider. How Lakshmi and Sundari become the first females to take on these important roles makes for a story that works on two levels; A Pair of Twins is a story both of women’s rights and an engaging aspect of Indian culture. 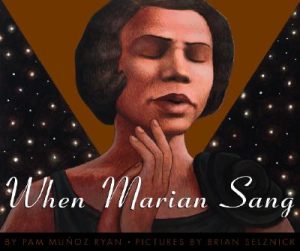 When Marian Sang: The True Recital of Marian Anderson by Pam Muñoz Ryan and Brian Selznick

While many of us are familiar with Marian Anderson’s famous concert at the Lincoln Memorial in 1939, there’s much more than one moment to this singer’s life. Ryan details Anderson’s childhood singing in her Philadelphia church, her European debut, and her struggles to be allowed to perform on the public stage in the United States. Ryan meshes details from Anderson’s life with lyrics from her songs and Selznick uses a sepia palette to dramatize Anderson’s strength in the face of great adversity. 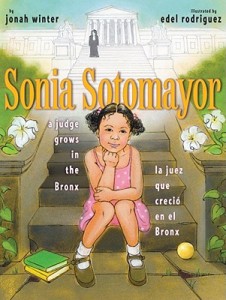 Sonia Sotomayor: A Judge Grows in the Bronx by Jonah Winter and Edel Rodriguez

Despite growing up poor, a diagnosis of diabetes, and losing her father at a very young age, Sonia Sotomayor became the first Hispanic woman United States Supreme Court justice. Readers learn how the support of her mother and her own hard work as a student led Sonia Sotomayor from a Bronx tenement to Washington, D. C. This is a bilingual picture book biography. 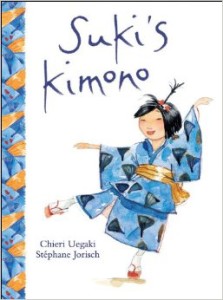 So what if her sisters think it’s strange; Suki is determined to start the first day of school dressed in the kimono that reminds her of her grandmother’s summer visit. Suki wins her new class over with some Japanese dance moves in this bubbly picture book that celebrates self-confidence. Interspersed with Japanese vocabulary, which is defined in a glossary. 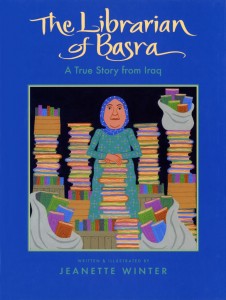 The Librarian of Basra: A True Story from Iraq by Jeanette Winter

To Alia Muhammad Baker, head librarian at the Basra, Iraq library, books are “more precious … than mountains of gold.”  Spare language and detailed illustrations depict Baker’s rescue of 30,000 books from the ravages of the Iraq War in 2003. Winter portrays Baker’s courage and honor while depicting the war in a context appropriate to young children. Winter followed this excellent picture book with two other biographies featuring girls from the Middle East: Nasreen’s Secret School: A True Story from Afghanistan and Malala, a Brave Girl from Pakistan/Iqbal, a Brave Boy from Pakistan: Two Stories of Bravery. 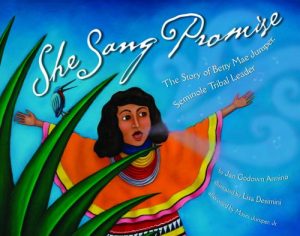 As a young girl, and the child of a Seminole Indian woman and a white man, Betty Mae Jumper experienced discrimination both inside and outside of her tribe. Despite poverty, she demanded to learn to read, and eventually became a nurse, storyteller, journalist, activist, and even an alligator wrestler! She also became the first woman elected to be a Seminole tribal leader. 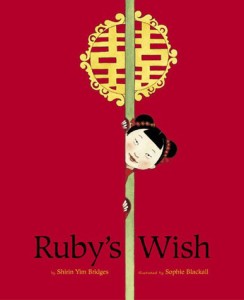 A beautiful story with Blackall’s trademark lovely illustrations tells of a young Chinese girl’s dream to go to university. Based on the author’s grandmother, Ruby’s tale is simple enough for young children, and engaging for older kids, too.

Moses: When Harriet Tubman Led Her People to Freedom by Carole Boston Weatherford and Kadir Nelson

Tubman’s steadfast belief in her calling to help free hundreds of African-American slaves kept her moving forward despite intense danger. Dramatic action is interspersed with Tubman’s prayers and conversations with God. Nelson’s expressive paintings lend the book a transcendental feel. A wonderful book to begin to understand the nature of Harriet Tubman’s serenely powerful courage. 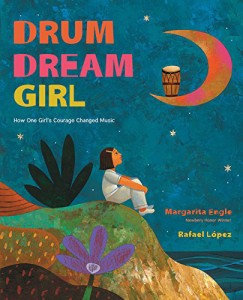 A picture book inspired by the life of Millo Castro Zaldarriaga, a young girl of Chinese-African-Cuban descent, who grew up in 1930s Havana. Modern-day children will find a role model in the story of the Drum Dream Girl, who defies her culture to become a jazz drummer. They’ll also enjoy the rhythmic poetry of Engle’s prose, which will remind them of — what else — a percussion beat. Pair this one with Little Melba and Her Big Trombone, the award-winning picture book biography of African-American jazz musician Melba Liston. 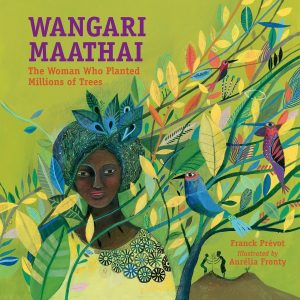 Wangari Maathai: The Woman Who Planted Millions of Trees by Franck Prévot and Aurélia Fronty

This brand new picture book biography received starred reviews from three major children’s book review journals. It introduces children to the Kenyan activist and Nobel Peace Prize recipient who overcame sexism, racism (in her American education), and political strife to work toward the reforestation of her homeland. 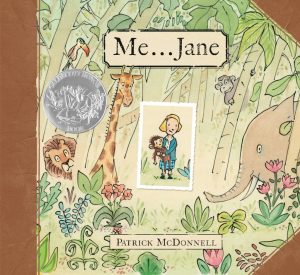 Me … Jane by Patrick McDonnell

Meet Jane Goodall as a child, with her plush chimpanzee Jubilee always by her side. She observes the natural world with much interest, and adventures in her imagination to Africa to swing through the trees à la Tarzan. Ink drawings, stamps, and photographs give the story the feel of a journal. In the end when the adult Jane is introduced, readers learn that seemingly outlandish fantasies can become reality. 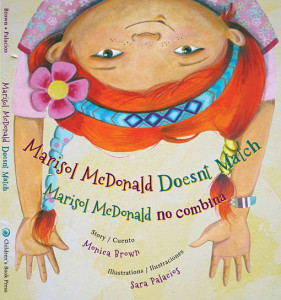 Marisol McDonald is a Peruvian-Scottish-American girl who doesn’t match. She has red hair and brown skin. She likes to mix polka dots and stripes and cursive with print. This homage to growing up biracial encourages kids to embrace who they are and what they love, rather than to try to meld into what others might define as “normal.” 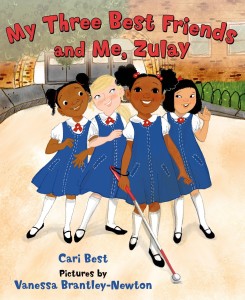 My Three Best Friends and Me, Zulay by Cari Best and Vanessa Brantley-Newton

Zulay, who is blind, is integrated into a classroom of sighted children (all wear the same uniforms, a clever symbol that reinforces just how alike children are, despite varying “abilities”). When field day is announced, Zulay declares she would like to run the race in her new pink shoes. Zulay’s triumphant field day race, and the hard work she engages in to “learn” to run with her cane, make for a joyful, inspiring story. Zulay is African-American, and her three best friends are African-American, Asian-American, and white. The story is full of kids and adults with varying skin tones, which makes Zulay’s classroom appear truly American. 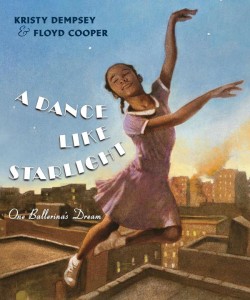 A Dance Like Starlight: One Ballerina’s Dream by Kristy Dempsey and Floyd Cooper

This is the story of the first African-American ballerina to perform stateside, told through the eyes of a fictional young girl. In early-1950s New York City, the elementary-aged daughter of a seamstress for the ballet yearns to someday perform onstage. But she wonders, “Could a colored girl like me ever become a prima ballerina?” When her mother takes her to see Janet Collins’ barrier-breaking performance at the Metropolitan Opera, “It’s like Miss Collins is dancing for me, only for me, showing me who I can be.” Dempsey’s gorgeously poetic language and Cooper’s subtractive painting technique, which lends a dreamy air, will encourage young girls to pursue their desires, regardless of obstacles. A warm, hopeful story that every girl of every color should read.

These titles are wonderful tools to celebrate Women’s History Month with children! Enjoy and feel free to leave suggestions of other books that feature strong girls and powerful women in the comments.

Link disclosure: The author of this post is a participant in the Amazon Services LLC Associates Program, an affiliate advertising program designed to provide a means for sites to earn advertising fees by advertising and linking to amazon.com. That means if you purchase a book through an Amazon link that appears in this post, the post author receives a commission.

This post is part of the Women’s History Series on Multicultural Kid Blogs.  Be sure to visit our main page to see all of the posts and link up your own!

Rebecca has been a children's librarian, a teen librarian, an adult reference librarian, an archivist, the kid who shelves all the library books, and (years back) an ice cream slinger. Now she works for her kids. The pay is paltry, but she finds the subjects quite amusing. Regardless of her official title, she can't stop reading, thinking about, and writing about books. Tweet her @booklongenough.com, follow her on Pinterest at www.pinterest.com/abooklongenough, or on Facebook at https://www.facebook.com/pages/A-Book-Long-Enough/512250778825397.