Purim (פורים), the Festival of Lots, is a joyous, springtime holiday that is cherished by Jewish children throughout the world. It is a noisy, fun-filled affair involving the traditional telling of the Purim story, costumes, gift-giving to friends and those in need, and eating a festive meal with family and friends.

Purim is celebrated according to the Jewish calendar, which does not correspond to the civil or Gregorian calendar.  The holiday is observed in most places on the 14th of the Jewish month of Adar, which usually corresponds to an early spring celebration in February or March.  In 2015, Purim will be celebrated starting on the evening of March 4 through the day of March 5. 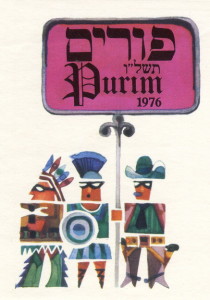 The story of Purim is recounted in the Book of Esther, known in Hebrew as the “Megillah” (מגילה) or “Megillat Esther” (מגילת אסתר).  The story takes place in the city of Shushan when King Ahashverosh ruled ancient Persia. The heroes of the story are Esther, a Jewish woman, and her cousin, Mordechai, the leader of the Jews of Shushan. The villain in the story is the King’s royal adviser, Haman.

The story opens with the King’s wife, Vashti, refusing to dance for guests at a banquet. Upset by his wife’s refusal, the King then held a pageant to select a new queen. At the pageant, the King chose Esther out of all the beauties of Shushan. Upon the advice of Mordechai, Esther did not reveal her Jewish identity to the King.  After Esther became Queen, Mordechai learned about a plot by members of the King’s court to assassinate the King. After Mordechai warned Esther, she told the King about the plot that Mordechai had uncovered.

Meanwhile, Haman regularly paraded through the streets of Shushan, demanding that all bow down to him.  One day, Haman demanded that Mordechai bow down to him. When Mordechai refused, Haman decided to hang all the Jews of Shushan. Haman selected the date for the execution by lottery, also known as the casting of lots (called “purim”).  After Mordechai alerted Esther of Haman’s plan, Esther revealed her Jewish identity to the King and convinced him to save the Jews.  The King then ordered Haman’s execution and appointed Mordechai to be his adviser.  Mordechai’s loyalty to the King and Esther’s bravery saved the Jews of Shushan from destruction. 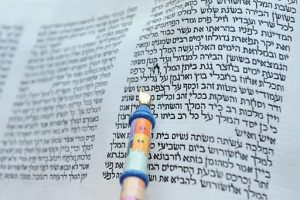 In Jewish communities across the world, Purim is celebrated with a public reading of the story of Purim.  Traditionally, the public reading takes place in a synagogue. However, the reading is anything but formal.  It is a loud, carnival-like affair.  During the reading, children cheer whenever Esther or Mordechai are mentioned and boo and shake noise-makers or rattles upon hearing Haman’s name. The holiday ends with a festive meal with friends and family.

As part of the festival, children dress up in costumes. Traditionally, children dressed up as the story’s heroine, Esther, or hero, Mordechai. Children also now dress up as superheroes, sports figures, and characters from their favorite books and movies.  Children and parents often spend a lot of time in designing, creating, and finding the perfect costume for Purim.

During the public reading of the Purim story, children drown out Haman’s name with a noise-maker, which is called a gragger (גראגער) in Yiddish or ra’ashan (רעשן‎) in modern Hebrew.  The graggers are made from a variety of materials, including wood, metal, and plastic.  In Israel, small, plastic graggers are everywhere, even at the check-out aisle in the supermarket.  In addition to readymade graggers, children also enjoy preparing for Purim by making homemade graggers out of paper, boxes, and other new and recycled materials. 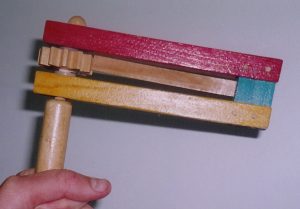 Jewish communities in different parts of the world have all developed unique food traditions to celebrate Purim. The most well-known food item is a triangle-shaped cookie that is traditionally filled with poppy seeds.  These cookies are called hamantaschen in Yiddish (המן טאשן) or oznay haman (אוזני המן) in modern Hebrew. Like the sufganiyot (סופגניות) eaten during Hanukkah, hamantaschen are now also prepared with many different fillings.  Every year, bakeries in Israel take hamantaschen to a different level, experimenting with creative combinations of seeds, nuts, chocolate, and fresh and dried fruits.  Our local bakery in the suburbs of Tel Aviv is showcasing these hamantaschen treats filled with everything from traditional poppy seeds to the sesame-based confection, halva (חלבה): 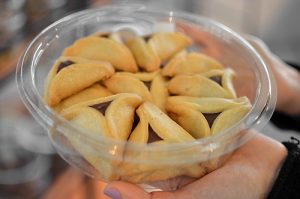 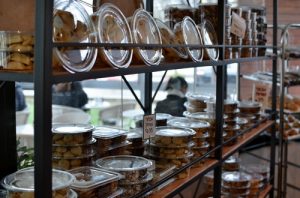 Responsibility to the Needy

In Judaism, people have a responsibility to give to the needy, especially on Purim. As part of the Purim festival, parents help children in preparing gifts of food and more to provide to those in need.  In addition, people also give gift baskets of food to friends.  The gift baskets often include hamantaschen, as well as other food items.

For families in Israel, Purim is one of the most anticipated and joyous festivals of the year.  In the weeks preceding the holiday, the malls are filled with kiosks selling Purim costumes.  Children wear their costumes to school and many work places host costume-themed Purim parties on the eve of Purim. During the day, there are carnivals, parades, and live performances of singing and dancing throughout the country. 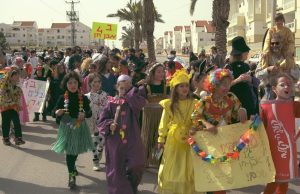 If you know someone celebrating Purim, feel free to wish him/her a Chag Purim Sameach (חג פורים שמח), which translates as “Happy Purim!” I wish you a very happy Purim!

For more on Purim, visit our Purim board on Pinterest, plus read why one mom says Purim is her favorite Jewish holiday!

Liane Marie Jarvis is a mom living in the suburbs of Tel Aviv. She blogs at BookBaShuk.com about books for bilingual children who speak English and Hebrew.