Carnival (Carnaval in Spanish) is a festivity that takes place in many countries around the world. From the vivacious colors of the costumes worn by many in the Carnaval Andino in Chile to the flamboyance of Venice’s all-time favorite celebrations, Carnival continues to be an occasion to pay homage to music, art, dance, and creativity like no other festivity.  Let’s take a look at the Carnival traditions of Venezuela. 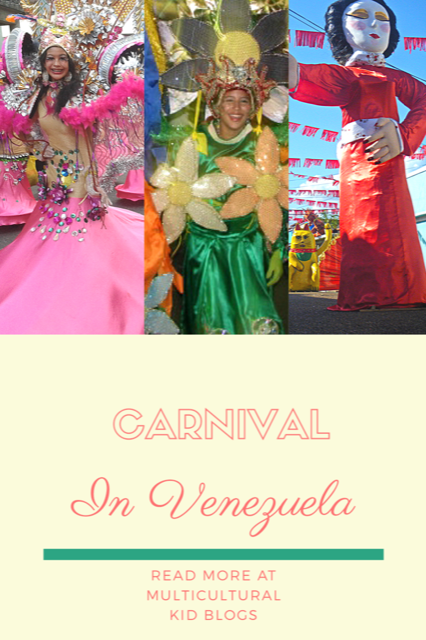 Celebrating Carnival in Venezuela is an idiosyncratic tradition that has its origins in colonial times when Venezuela was a colony of Spain. At the time when it was a colony, Carnival included rough games where people from the plantations used water as a weapon. In addition, men and women dressed up in colorful clothing to perform in street dances.

In the eighteenth century, the Bishop of Caracas Díez Madroñero turned the Carnival celebrations into three days of prayers, rosaries, and processions. Years later, the Mayor José Abalos returned its original meaning and resumed the Carnival, but with what he considered more “refined” elements. Parades, floats, and traditional foods were included to make the festivity more family-friendly. Additionally, the violent water games from before were softened to be enjoyed by children around the country.

Since then, Venezuelans have used all their creativity to create an atmosphere of joy and diversity even in times where the social and economic crisis of the country cast a shadow over their daily lives. Most of this creative effort can be seen in folk dances, grandiose outfits, and African inspired music. Carnival celebrations take place forty days before Easter Sunday.

Coastal towns and provinces celebrate Carnival much more fervently these days than any other place in the country. Venezuela regards Carnival about the same way it regards Christmas and Semana Santa (Holy Week, the week before Easter Sunday). It is a time to visit family and enjoy festivities together.

Many of these towns have a population whose ascendants came predominantly from African countries such as Cape Verde and Guinea. For example, the town of El Callao was founded by British and French seeking gold in 1853 (originally called Caratal). They brought slaves to do most of the work in the gold mines. The slaves kept their traditions partying fervently and dressing up in colorful outfits. The music that we still enjoy during Carnival these days has its roots in African beats of the past.

Later on, all of the people from El Callao, mine workers and Europeans alike, celebrated “El Carnaval.” They would dress-up extensively in lavish outfits and spend four days in a row enjoying traditional food, dances, and rituals. These four days would end with the dawn of Ash Wednesday, forty days before Easter.

But El Callao wasn’t the only town in Venezuela to have shaped what today we call Carnaval. Barlovento is a coastal town that has a population with strong African traditions. African slaves were brought from what today is the Republic of Congo and Ghana to work in cacao, coffee, and banana plantations that existed in the colonial period.

The use of drums and various other wooden instruments mainly of African origin is characteristic of Carnival in this area. These instruments are still a very important part of our folk music, especially during Carnival.

Where to Celebrate Carnival in Venezuela

El Callao y Carúpano is one of the first options you should choose to enjoy traditional Venezuelan Carnival dances. Grown-ups and children dress as devils, mediopintos, and madamas. Music with maracas and drums fill the streets of El Callao. While in Carúpano you can enjoy the rhythm of the calypso and samba.

If you prefer a beach atmosphere, traveling to Margarita Island would be your best bet. Carnival in Margarita is not as flashy as the Carnaval in El Callao, but still includes colorful parades and the Queen of the Carnival Beauty Pageant.

For a more alpine experience, Carnaval festivities in Mérida are very entertaining since the protagonists of this city are college students. These students organize one of the most famous music festivals in the country. La Feria del Sol is held during Carnival season and brings to Venezuela the talent of many well-known singers, music bands, and dancers of the world.

In 2016 UNESCO inscribed El Carnaval del Callao as intangible cultural heritage representation of the world. This carnival celebration highlights Callaoense history and diversity. It also celebrates its Afro-Antillean links and other community influences. This reinforces its cultural identity, promotes unity, and encourages younger generations to discover their heritage.

Intergenerational transmission of the practice occurs mainly within families and schools run by tradition bearers. These children learn skills like writing tunes, playing an instrument, singing, dancing or making colorful masks. Using these skills they can participate in the Carnival.

Some Venezuelans spend Carnaval resting at home or going to the beach. However, many others celebrate these festivities flamboyantly, as it is a party full of history and culture.

How would you celebrate Carnival Venezuelan style?

A Taste of Venice Carnival

10 Fun Facts About Venezuela For Kids