Did you love wearing costumes when you were a child? I did (in fact, I still do!). From my childhood, I remember Carnival as some of the most exciting and colorful days of the year. As many grandmas and moms did for their kids, my ‘abuelita’ made costumes for my sister and I. She was such an amazing seamstress. Check out the stunning Cleopatra costume she made for me in the image below. I remember the excitement we experienced the days before when trying on the dresses, the hats, and other complements. Homemade costumes are the best! 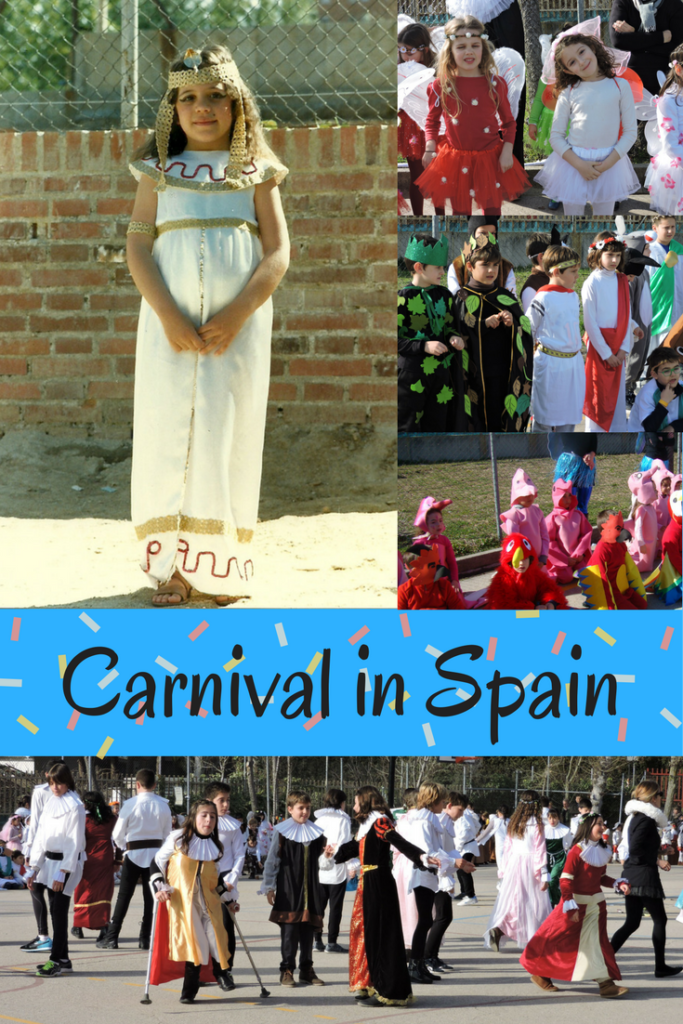 Spanish carnivals are great! They are days filled with dancing, singing, and a lot of fun. Days of running into pirates, fairies, astronauts, and knights while walking down the street. Even though Rio or Venice come to mind when people think of Carnival, some of the biggest celebrations in the world have taken place in Spain. Indeed, the Carnivals of Santa Cruz de Tenerife in the Canary Islands and Cadiz in Andalusia have been both declared Festivals of International Tourist Interest.

A Little Bit of History…

Carnival is the most celebrated pagan festival the world. It is a tradition that goes back to antiquity. Sumerians already celebrated something similar 5,000 years ago. Later, the Greeks and Romans adopted the tradition. But it wasn’t until the expansion of Christianity when the party took on the name of carnival (from Latin ‘carnem-levare’ which means ‘flesh farewell’). The main reason behind the name change was to say goodbye to eating meat and carnal pleasures during Lent. These were days in which almost everything was allowed. Hence one of the reasons to go disguised was to cover the face and safeguard anonymity.

How is Carnival celebrated in Spain?

Spain, as a Catholic country, has a long tradition of celebrating Carnival. It usually starts on a Thursday, a day in some places called ‘Jueves Lardero’ which came from — can you guess it — yes, lard! It usually consists of an open air group meal. The foods differ from one region to another, but meats, especially fatty meats, are the stars.

After that comes a weekend full of activities usually promoted by city halls. This time of the year, the weather gets a little better and days are a little longer. This allows for outdoor parades, costume contests, street theater plays, and other kind of festive performances.

Monday and Tuesday are usually working days, but schools take over. Even though people of all ages enjoy Carnival, kids are usually the protagonists of the celebrations. Schools organize all kinds of activities on these days. They often choose a theme so the kids learn about it. Each class dresses in the same kind of costume. Tuesday is called ‘Martes de Carnaval’ which in many countries is known as ‘Mardi gras’ or literally ‘Fat Tuesday.’  It is the biggest day of Carnival and the last day that meat is allowed to be consumed.

Despite having been celebrated for so long and being so deeply rooted in Spanish culture, in many occasions the different governments have prohibited the celebration of carnival. The most recent period lasted almost forty years during the Franco dictatorship. During this time, Carnival was still celebrated, although on different dates and with different names. In 1977, the first Carnival was celebrated in freedom.

One of my favorite events, Ash Wednesday, is celebrated on the first day of Lent. ‘El Entierro de la Sardina’ or ‘the Burial of the Sardine’ consists of a parade that parodies a funeral. It culminates with the burning of a symbolic figure, often a representation of a sardine. Like in other fire ceremonies, it is meant to be a purification event. It is a symbolical farewell to the past to allow society to be reborn, and transformed with new strength.

Why a sardine? The tradition is supposed to have originated in Madrid when King Charles III wanted to celebrate the end of the Carnival with the people of the city by providing sardines to everyone. It was a very hot day, unusual for the time of year, so the sardines went bad. To get rid of the smell  they decided to bury the fish in ‘la Casa de Campo,’ the biggest park in the city. Truth or not, this is a very fun parade where everybody is dressed in black and pretends to be crying which totally contrasts with the prior days of joy and color.

Since Spain is such a diverse country, there are different variations of Carnival. Let me tell you a little bit about the two most important and crowded ones.

Music is possibly the most outstanding feature in Cadiz’s Carnival. Locals work hard throughout the year to develop their songs loaded with irony and criticism. ‘Comparsas,’ ‘Coros,’ ‘Chirigotas,’ and other groups of singers perform in the streets. Many compete at the city’s ‘Gran Teatro Falla.’

On the other hand, Carnival in Tenerife is the most similar to those found in Brazil or the Caribbean. Dancing and glamour take over the streets that are full of people from around the world. One Carnival tradition is the election of the Carnival Queen. This parade is similar to a traditional beauty pageant in which the originality of the very heavy (typically over 400 pounds) costumes is taken into account.

Whether celebrating in one of these cities or even the smallest village, Carnival is always a blast. What about your side of the world? Do you celebrate Carnival?

Maria was born and raised in Madrid, Spain, where she studied Engineering and her PhD. She currently lives in the US with her Oregonian husband (a.k.a. Papa Monkey) and her two little Spanglish Monkeys. The Monkeys blog, in English and Spanish, at www.spanglishmonkey.com about their bilingual and multicutural family.

Latest posts by María (a.k.a. Mama Monkey) (see all)