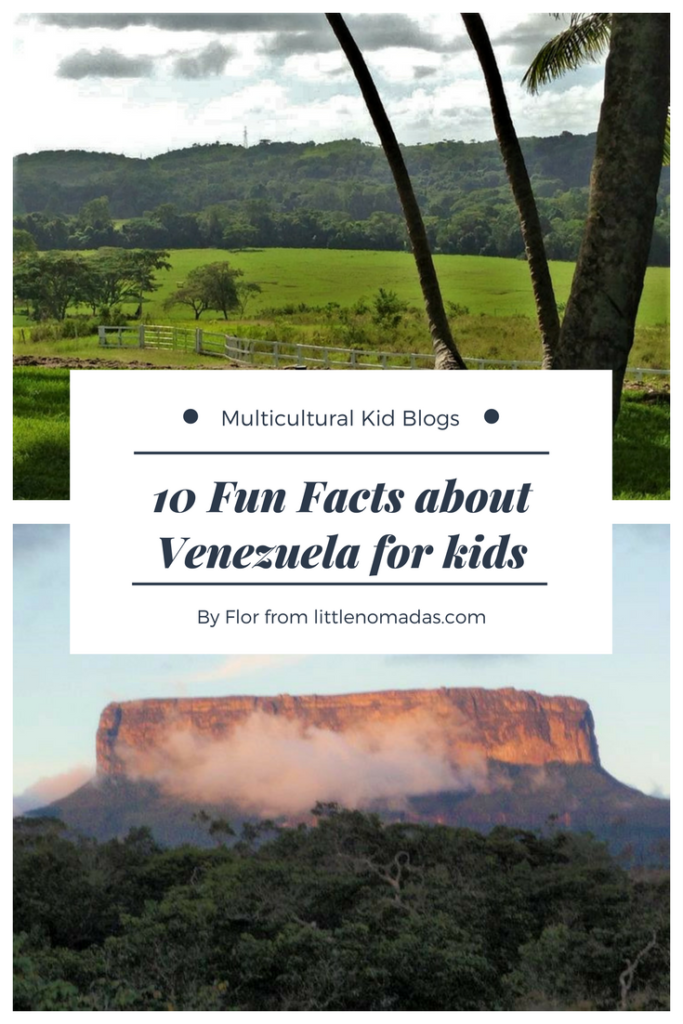 Venezuela, officially known as the Bolivarian Republic of Venezuela is a South American country that has over 31 million people, stunning scenery and nice tropical weather that makes swimming in the Caribbean Sea a year-round activity for many Venezuelans and tourists. Sounds great, right? Let’s learn more about this charming region through these 10 fun facts about Venezuela and discover a land full of spectacular wildlife and delicious cacao.

#1 Venezuela is home to the world’s largest rodent.

The Capybara, also known as Chigüire, is the largest rodent of the world and native to the Venezuelan savannas. Capybaras are friendly herbivore animals that graze mainly on grasses, fruit and tree bark. They are excellent swimmers and can remain underwater for up to five minutes and uses this ability to escape from predators. These animals are frequently hunted for their meat and pelts, being the Pisillo de Chigüire one of Venezuela’s traditional dishes, served especially during Easter celebrations.

Activity: Can you find Venezuela’s three most important cities Caracas, Valencia and Maracaibo on the map? 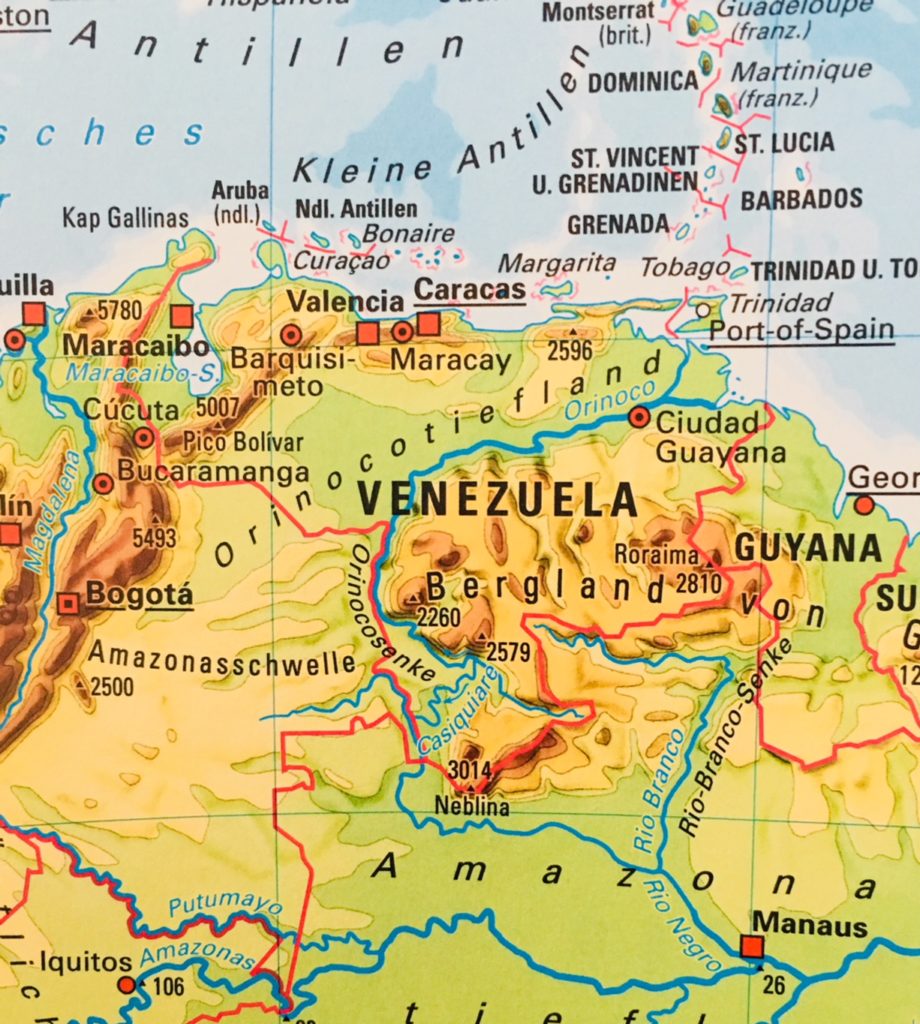 #2 It’s a place where traditional toys get along with modern playing trinkets.

In Venezuela, children have fun playing with traditional toys such as the Perinola, el Trompo y Gurrufío. These toys are handmade out of wood and painted with bright colours. Even though the stores sell the latest toys and video games, Venezuelan kids also enjoy spending time with family and friends playing with generational games that are part of the country’s rich culture. These toys are an interesting mix of Spanish and African games from the colonial times. Venezuela’s artisans also make wooden household utensils and artifacts. These are of high quality and unique beauty.

Every evening the capital city of Venezuela, Caracas, is visited by colorful macaws (Guacamayas) that fly freely through the sky and make a pitstop in balconies and terraces around the city. The Guacamayas live in the nearby mountain Cerro El Ávila and make their way through houses and buildings at the end of the day. People can hear their loud call and sometimes feed them fruit such as bananas, papaya, pineapple, and mango. They are very social and friendly.

Activity: Native people from the Southeast region of Venezuela speak an indigenous language named Pemon. Try learning the personal pronouns I and you (singular) in Pemon. I=yuré   You=amäre

#4 It is a country where not all of the mountains have a peak.

A unique feature of Venezuela and its neighbor countries Brazil and Guyana are the tepuis, high table-mountains (no peaks there) with high sides. Tepuis range in elevation from 1,000 to 3,000 meters. They host an also unique array of plants and animals species that are not found anywhere else in the world. Some of the well-known plants living at the top of the mesas are of the carnivorous type. The Auyantepui is the largest tepui with a surface of 700 km2 and is the home of the Angel Falls, which drops from a cleft in the summit. Venezuela’s biggest tepuis are located in the Canaima National Park.

Activity: Did you know that Venezuela’s tropical climate is responsible for the evergreen landscape in the central region of the country? Can you spot my brother in the picture?

#5 Home to the world’s highest waterfall.

Angel Falls is located in the Canaima National Park in the south of Venezuela and it is the world’s highest uninterrupted waterfall with a height of 979 meters and a plunge of 807 meters. It is named after Jimmie Angel, the first person to fly over the falls. Angel Falls is one of Venezuela’s top tourist attractions, though a visit to the waterfalls isn’t that easy; people have to fly on a small airplane, navigate on a boat or canoe, and walk through the jungle to reach the majestic falls. Did you know that Angel Falls inspired the setting of Disney’s animated film UP?

In cities like Caracas, Valencia, Barquisimeto and Maracay it is customary to travel to early morning church services or “Misa de Gallo” during Christmas season on roller skates. These called Patinatas started around the 1920s in Caracas, the capital city of Venezuela, and represent the festive mood of the people who also attend mass to honor Baby Jesus (El Niño Jesús) and spend time with family and friends. During these religious services, people gather to pray and sing the famous Venezuelan Aguinaldos to the rhythm of the guitar, drums, cuatro ( a small, four-string guitar), furruco, maracas and tambourine.

#7 Home to an everlasting lightning storm.

The National Aeronautics and Space Administration (NASA) declared the Lago de Maracaibo as the lightning storm capital of the World. There are an average of 300 electric storms and a total of 1,6 million lightning strikes per year in this place. Venezuelans know this phenomenon as the Relámpago del Catatumbo, an impressive display of blue and white lightning that scientists, tourists, and visitors can enjoy all year, especially from November to April (rainy season).

#8 Sweetness that is exported to other corners of the world.

Venezuelan regional farmers produce some of the world’s finest cacao. The climate, the unique combination of minerals of the soil, and harvesting techniques give cacao beans in Venezuela a distinct flavor, rich and aromatic. The meticulous and labor-intense process to produce high-quality beans has attracted the attention of many well-known chocolatiers around the world, who travel to Venezuela to try and buy cacao to bring to their home countries. Nowadays, it is easier to find Venezuelan cacao in many countries around the world.

#9 There is a day when everyone goes Loco!

Venezuelans have different traditions to commemorate the Day of the Holy Innocents, celebrated on the 28th of December. Church services and traditional dances take place all around the country. One special festival, addressed to children, is the party of the “Locos and Locainas” held in the states of Merida, Trujillo and Portuguesa. After Mass, the “Locos” or “Mamarrachos” dress in crazy suits and cover their faces with masks or paint. Traditionally, the roles are inverted: men dress as women and women as men, children disguise as elders and adults as kids and all the people make jokes and dance accompanied by a musical ensemble.

#10 Home to one of South America’s best-preserved colonial towns.

In the northwest of Venezuela, the port city of Coro greets visitors with charming colonial-style buildings and cobblestone streets that date as back as the 1500s. Coro is a unique example of Spanish, Antillean, Dutch and indigenous architectural influences. Families have a great time walking around its old town while enjoying traditional dulce de leche made of goat milk and sugar, and delicious Arroz con Coco (rice pudding with milk, coconut, and sugar). The port city of Coro is listed as a UNESCO World Heritage Site since 1993.

We hope you enjoyed learning about this fascinating country through these 10 fun facts about Venezuela.

8 Ways To Learn About The World Without Leaving Home

10 Fun And Interesting Facts About Belize