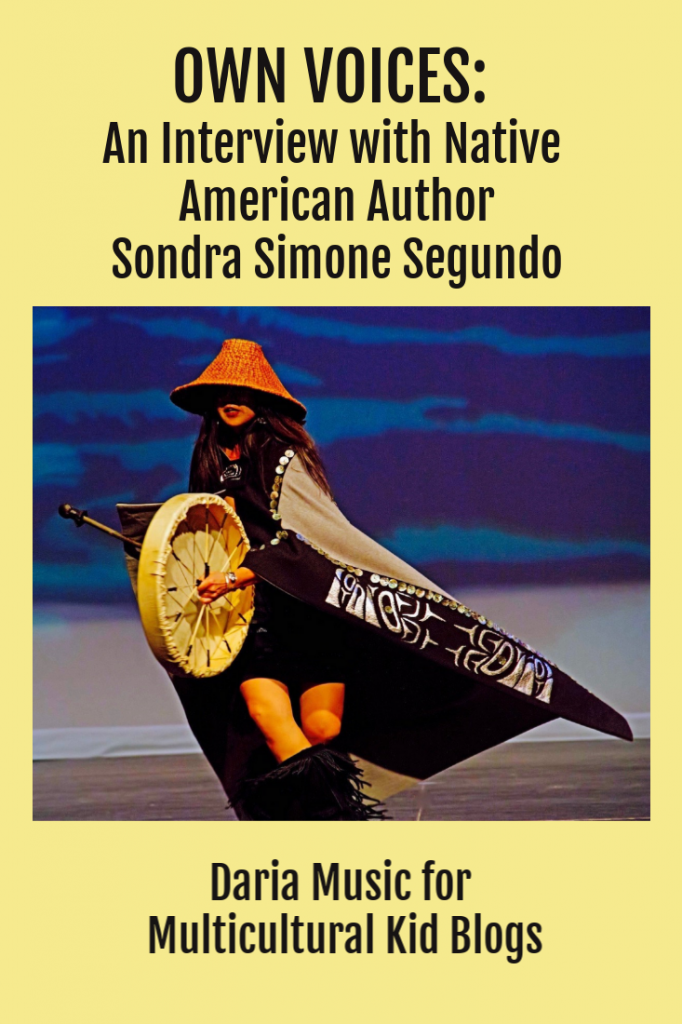 How would you like to go back in time and visit a Native American village on the coast of what is now Alaska or the Pacific Northwest? Haida author, illustrator, and artist, Sondra Simone Segundo does that with Killer Whale Eyes. In this unforgettable story with gorgeous illustrations, you travel back several centuries. Readers experience a time when Haida culture was strong and powerful. Additionally, their relationship with the natural world was unbroken. 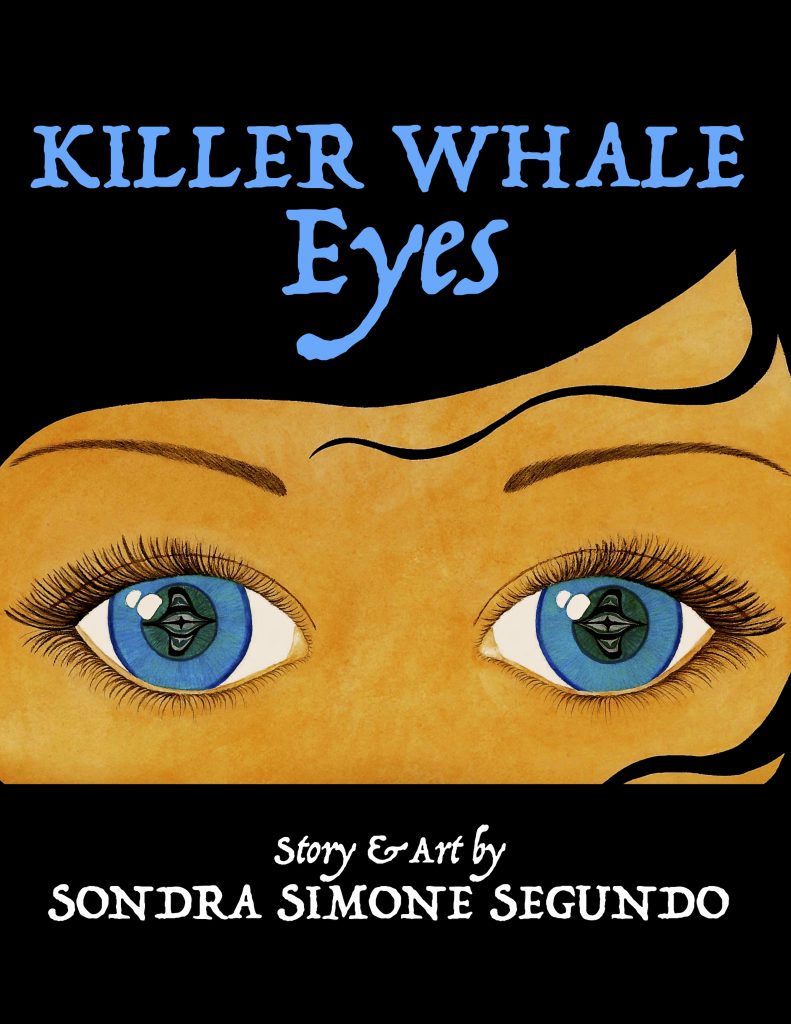 The tale of Killer Whale Eyes is set about 400 years ago. Recently, I spoke with the author. My discussion with Sondra focused on the cultural context of the book. She spoke eloquently about what that time period was like for her people. She shared the inspiration behind this story, too.

“The Haida lived along the NW Coast of Turtle Island, also known as North America, since time immemorial. We originated from the Mother Land of Haida Gwaii. When the island got too crowded, many of us moved to the next island over, now known as Prince of Whales Island in SE Alaska. A powerful people, we knew the ocean well and paddled up and down the coast in massive canoes carved from a single cedar tree. We spoke many languages. Master carvers, artists and weavers, we invented a unique art form called Formline Art. The Haida shared the land and sea with many other nations. Together we all shared Creation with powerful beings such as killer whale, bear, raven, eagle. So, we always treat these lives with honor & respect. You can see this relationship reflected in our clan system, on our regalia and in our dances, stories, and songs.”

Although the story in Killer Whale Eyes is not a traditional legend, it was inspired by an important event in Sondra’s family and clan. A beloved chief was dying. “He was a good chief,” Sandra notes. “We did not want him to leave us but he said he would come back as an orca. We asked ‘but how will we know it’s you?’ He replied, ‘I will have 2 fins.’ Usually, about a year passed before a loved one returned to us as an orca. Sure enough, a 2 fin orca appeared and we became SG_aan ts’al tlasdang, the 2 fin killer whale crest. Much of our regalia, art stories, and songs reflect this relationship we have with the orca.” This true tale of ancestors helped to inspire the book’s narrative. 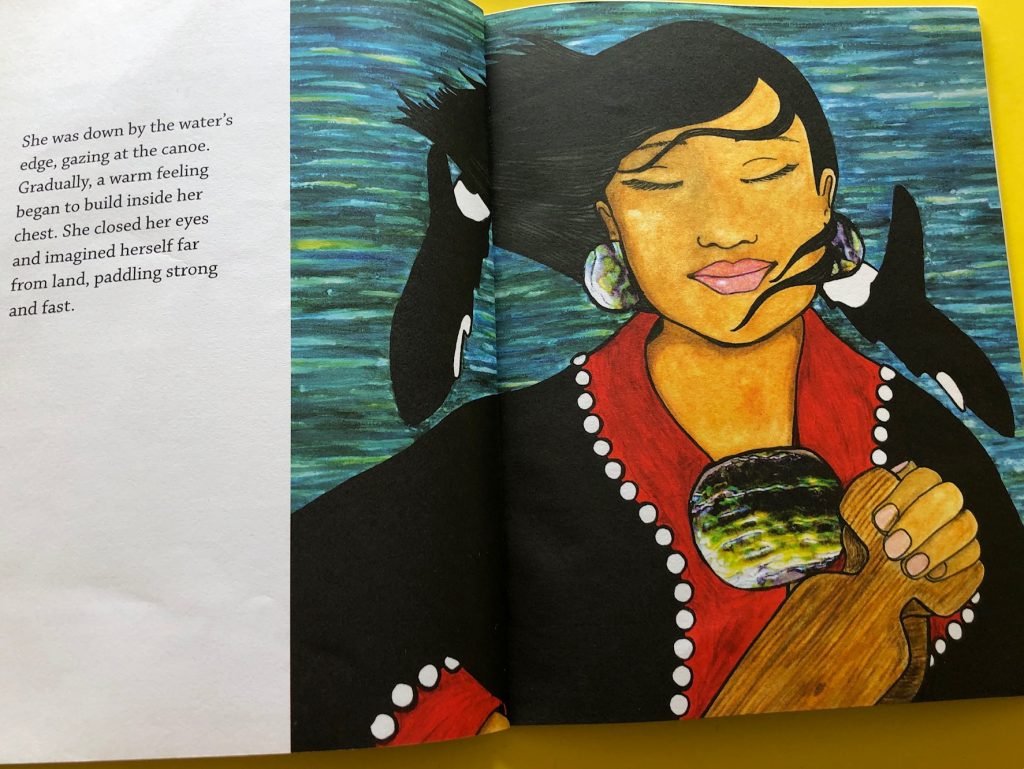 Altogether, this book took Sondra 9 years to complete. That period was a time of great change for the author. Many of the illustrations carry a deeper message about discovering who you are and finding your own personal freedom. Whether you are an adult or a young person, this book has deep meanings on many levels.

After the story and illustrations were complete, Sondra felt moved to add a song in her Native language to the story and the book package. She explained: “Our language was going extinct. This was my way of helping it to survive. Furthermore, it helped me to learn. I reached out to my elders and language learners. At the time, my grandma’s brother was still alive. The last fluent speaker in our village of Hydaburg, Alaska, my cousin Ben worked with him to help translate my song into Haida. They taught me how to pronounce the words. Then, I composed the tune with 2 part harmony and drum and rattle. This is an important process as our culture is always evolving! I’m the first person from my village to write ‘new’ stories about our people.”

In addition to Killer Whale Eyes, Sondra has a new book, called Lovebirds, The True Story of Raven and Eagle. It also contains a story and song in the Haida language. As a person who grew up in a time when most books about Native or Indigenous people were written by non-Native people, I am thrilled to see authors like Sondra creating these memorable books. All in all, it is a joy to spend time with her people, her family, and her clan through her writings.

Disclosure: This post contains two Amazon affiliate links. If you click and purchase, Multicultural Kid Blogs will receive a small commission that will be used towards maintaining this site.

You can find her books on Amazon: Killer Whale Eyes and Lovebirds: The True story of Raven and Eagle

Have You Met Molly of Denali?