Egypt is surely on the top of most people’s bucket list.  Few countries of the world have a rich heritage background, and even richer cultural history. Egypt is a unique fusion of art, culture, as well as a little mystery. These attributes make it the most popular setting for all of those adventure movies in your iTunes or Netflix queue. 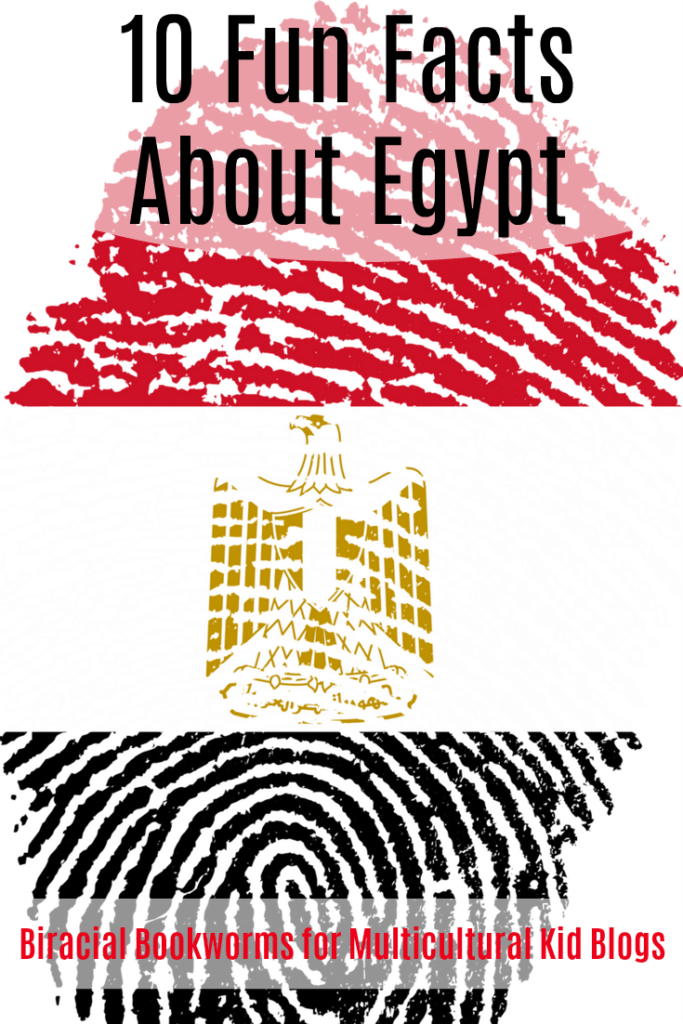 Today, we want to celebrate Middle Eastern and North African Heritage Month with a top ten compilation of fun facts about Egypt. Whether you have always wanted to go to Egypt, or you have had the ultimate privilege of living there, you will enjoy these Top 10 Fun Facts About Egypt.

From the freshest Mediterranean seafood in Alexandria to the street carts in Cairo full of Koshary, this is a food mecca.  Fresh mango in the summer is absolutely delectable. And don’t even get me started on the explosion of flavor in your mouth with dishes like kofta (meatballs), dolma (stuffed grape leaves). My personal favorite; shawarma (shredded meat in a pita).

However, you will never guess what seems to be the resounding favorite dish with the locals; I will give you a hint… it’s green and slimy.  The first time I had heard of Molokhia was when I was working at a sports camp for children out the desert.  They announced the lunch menu and when all the kids started cheering, I figured it was something spectacular.  When I saw what it was, I was sure all the kids had gone mad.  Turns out, Molokhia is best green slimy dish you will have in your lifetime! Trust me, I am a convert.

The popular Nile beer is also a must.  Even in ancient times, the Egyptians liked beer so much that they left sculptures of brew masters in the tombs. This was so that the dead person would not have any difficulty looking for beer in their afterlife.

2. Scuba Diving and Snorkeling in the Red Sea

Most people think of Luxor (the Valley of the Kings) or the Giza Pyramids when they think of Egypt.  After all, these sites are what is typically shown in the movies. However, Dahab has some of the world’s best scuba diving in the world.

For an experience of a lifetime in Dahab, plan your next vacation with the entire family. Just a short flight from Cairo, you can enter the underwater world in a safe, fun and educational way. Have the adventure of a lifetime with quality, environmentally friendly and life changing underwater experiences in the Red Sea.

After hiking all over the ancient ruins of Cairo and sand dunes of Upper Egypt, nothing will feel better than relaxing by the Red Sea.

3. The Myth of Camels

Contrary to what you may see in every book you have ever read about Egypt, camels are not the most popular form of transportation. Ancient Egyptians actually used donkeys as “beasts of burden”. Thanks to the Nile River that was centrally located to all the main settlements, felucca boats are the “super highway” of Egypt.  Remember, the Nile River runs north. The Nile River actually starts in Jinja, Uganda (where I highly recommend you take a bungee jump down to see the crocodiles up close). 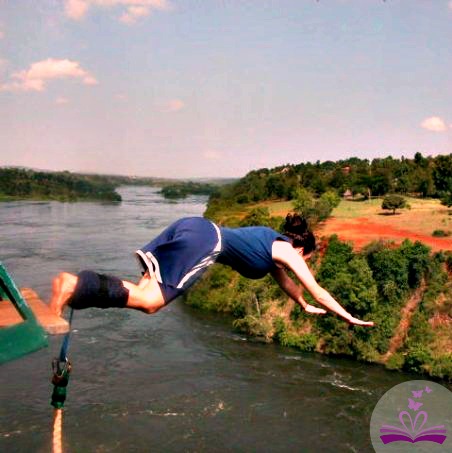 For thousands of years, huge wooden barges were used to transport grain and heavy stone blocks; and felucca boats/papyrus boats were used ferries for people. Ancient Egyptians believed that the sun god Ra sailed across the sky in his solar boat.

Even today, you can travel all around Egpyt to the beautiful sights of Aswan, Luxor, etc. on a very fun Nile River Cruise.  Whether it is just a dinner hour trip from the docks in Maadi, or a few days on a cruise, the Nile is a cultural experience that you cannot miss.

As an avid runner, the Breast Cancer Annual Race in Egypt around the pyramids in Giza was the most incredible and fun race I have done; bar none. Not only are you fundraising for such an important cause, the scenery could not be more exciting.  If you are traveling to Cairo in September, this is a MUST do.  You can play tourist afterward and go inside the pyramids and ride the camels around the Sphinx (for 50 times the price you will pay anywhere else in the country).

You can smell the culture the moment you enter the grand bazaar of Khan el Khalili.  Even after traveling all over Africa with different impressive markets, I believe the Khan is in a category of its own. You cannot rush this incredible shopping experience.

Sit down with the local jewelers and have a personalized kartoush made for you and as souvenirs to take home. While you enjoy a mint tea, learn from the best experts in the world how to prepare and smoke a hookah pipe. It will be quite the party trick for when you get home too.

You cannot go home without experiencing the thrill of bartering for spices and alabaster with the local shop owners. 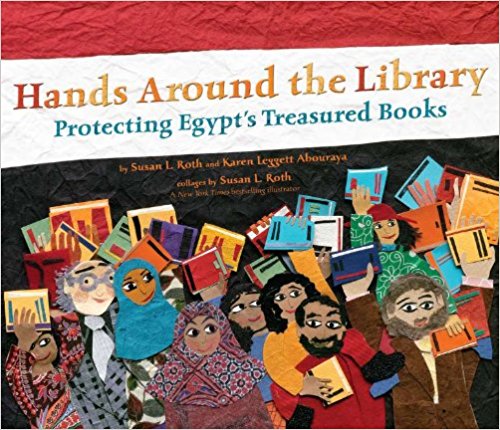 In January 2011, thousands of protesters rose against the government regime of President Mubarak. In the middle of the protests, Muslims and Christians formed a human chain to protect the Library of Alexandria, chanting “We love you, Egypt!” This wonderful moment is captured amidst a country in complete chaos by two award winning authors. This event prompted two women to write an incredible picture book.

Hands Around the Library: Protecting Egypt’s Treasured Books strikes a particular chord with me.  In all honesty, I haven’t been able to bring myself to read it as I experienced the fall of the regime first hand. I was in Cairo teaching at an international school when the Revolution happened.

As I was trying to get my daughter an emergency passport from the U.S. Embassy in Cairo, I had to go through the crowds of thousands of protesters in Tahrir Square.  Some of my friends were even amongst the protesters.  I watched in awe as the Christians and Muslims protected each other during the prayers so that no harm would come to them. This scene of love and unity is forever etched in my memory.  Rarely shown in the media are different religious groups of people at peace.

Both of the authors Susan Roth and Karen Leggett Abouraya have personal connections to their brilliant and beautiful picture book. Their perspective of sharing modern Egypt with students teaches not only literacy skills, but to learn about “what’s important in other people’s lives and figure out what we want to be important in our own lives.”

Their website also hosts all sorts of games and activities for the picture book that you can supplement when reading this amazing book aloud.  Be sure to check out these multicultural children’s books about Egypt as well!

Truly, Egypt should be noted as the OGs of feminism. There were three women that we know of that served as “King of Egypt”.  Just like with every other country, ideally, the king of Egypt would be the son of the previous king.

However, in times where there was no heir able to serve, there were at least three occasions women took the throne. They ruled in their own right as female “kings”. You may be familiar with the most successful of these female rulers, Hatshepsut. This amazing woman ruled Egypt for more than 20 prosperous years.

Women also once enjoyed more rights in Egypt than men did (unheard of right?!) This has is not necessarily the case in modern times. However, it is a fact the women in Egypt in ancient times enjoyed more rights than men. Socially and economically speaking, they could start their own business, own their land, as well as pursue a career of her dreams.

Very little known fact, there is a suburb in Cairo called Manshiyat Naser, or more widely known as “Garbage City”. The Zabaleen or “garbage people” live in a city where the streets and even the roof tops are completely covered in garbage.  In a city of 20 million people in Cairo, they have never built a system for waste disposal.  So the people of Garbage City collect the trash all over Cairo on donkey carts or trucks for a fee. After collecting the garbage, they take the trash back to sort (men usually do the collecting and women usually do the sorting).

We had the privilege of meeting a very wonderful man named Hanna Fathy. He is a Coptic Christian “Zabaleen” and decided to change his own fate.  He founded the Solar CITIES project in 2005. This project has been helping his community to build solar water heaters and generators out of the garbage.

Now, just 12 years later, Hanna travels all over the world promoting his project. He is currently teaching other international environmental organizations how to build these solar heaters and generators out of recycled materials.   The Solar CITIES project has been recognized by National Geographic.

Hanna is truly a hero for taking a community of people perceived as “outcasts from the slums”. Through his project, he has collectively showcased the intelligence and expertise that is present, instead.

Did you know that you can take a trip to the amazing cities in Egypt right from your own living room? Google Lit Trips, NOVA, and National Geographic have crafted virtual field trips of sites that even tourists cannot access in person because of security or preservation reasons.  This is a practical way to expose children to the amazing sites and culture of Egypt. This can be done in preparation for a trip, or as a way to promote global citizenship through exposing children to other cultures.

Looking to the world of STEAM (Science, Technology, Engineering, Art, and Mathematics), we have many Egyptian role models to choose from.  Inventions such as black ink and toothpaste are incredible. However, also attributed to the Egyptians is the 365 day lunar calendar, medicinal cures for eye infections, the decimal system, and more. The many incredible inventions of the Egyptians is a great unit of study for students interested in STEAM education.

Welcome to the third annual Middle Eastern and North African Heritage Month series from Multicultural Kid Blogs! Follow along all month long for great resources on teaching children about the heritage of this region, and link up your own posts below. Don’t miss our series from last year and from 2015!

Education Consultant at Biracial Bookworms
Bethany is an educator and reading specialist. She has taught in the U.S. as well as international schools in 5 different countries. Her goal is to encourage family literacy that is multicultural and culturally responsive. Her blog is full of resources to empower and arm families/ teachers with tools to teach global citizenship through reading, traveling, and learning languages!