Parenting abroad is tough for anyone, but it can be especially lonely for expat dads. Here is a look at expat fatherhood and why it can be so difficult.

When you’re thinking of moving abroad with your family, one of the most important factors to consider is social life quality in your destination country. Is it easy to meet new people and make friends? Are the locals friendly? How about an expat social scene?

When mums sit in front of the computer to do their research, they often happily discover that the town where they are going to live has a lot to offer to expat mums. Toddler playgroups. Expat mums’ coffee mornings and cocktail nights. Extracurricular activities at school where they can volunteer. Business networking events for entrepreneur mums. Facebook groups and forums to ask for advice on schools and connect with other mums living in the area. If you type in Google “expat mums in Hongkong/Abu Dhabi/Paris”, you will definitely get a lot of results.

However, if you type “expat dads” …. you probably won’t get many.

Expat fatherhood may be a very lonely road. 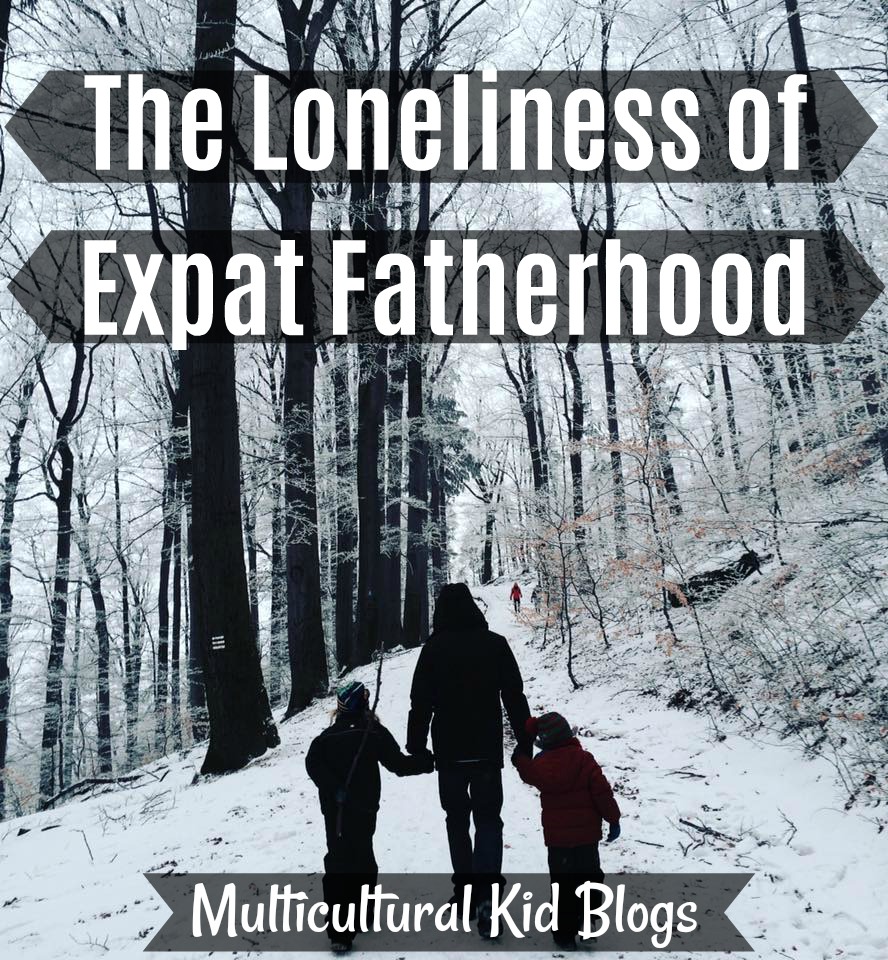 The Loneliness of Expat Fatherhood

Right, a working dad will meet people at workplace. There will be social events and nights out, too.

However, many dads think it is not professional to discuss issues related to childcare at work.

An expat workplace is often a melting pot of people coming from many different cultural backgrounds and – consequently – parenting styles. Some dads may have never felt the need to talk about children at work and make some “dad friends” because they never did it back in their home country. Actually, parenting bloggers often use the term “mum friends” to refer to mums who bond over children’s activities, like play dates in the park or toddler play groups. However, I have never seen a single mention of “dad friends”.

Some expat dads may come from a background where playgrounds, school outings and birthday parties were always a “mum’s job”. Others perhaps used to socialise mainly with extended family, and so they find meeting some strangers for coffee “to make new friends” is a totally foreign concept.

Expat fatherhood becomes even more complicated when an expat dad becomes a stay-at-home dad and suddenly is in charge of the school run, birthday parties and play dates. Given that in many parts of the world dads are still largely outnumbered by mums at school gates, it may feel awkward for a dad to approach a group of mums and initiate a conversation.

My Venezuelan husband became an expat dad eight years ago when our eldest son was born in Malaga, Spain. Seven flats, one more child and one international move later, he’s totally rocking it as the only Latino dad and in fact the only expat dad in our neighbourhood in Poland.

He was a stay-at-home dad when our boys were babies in Spain. Today despite a busy job he often takes over home duties when I travel for work.

Expat fatherhood for him means raising children far away from his huge, supportive extended family in Venezuela.

He was raised in a large, multi-generational household, where he lived with his mum, brother, grandparents, aunt and cousins. There were always other family members coming over. There was always someone to take care of children.

Both our sons were born in a tiny flat in Spain. My husband’s mum came to Spain at that time to help us during the first few weeks, but after that it was just us and the kids.

When our eldest was born, I had already joined a local mums’ group and later a breastfeeding support group. My husband didn’t feel like meeting new people that way; actually, there weren’t even any dad groups in the area.

I could also spend hours chatting with friends from my hometown on Facebook who recently became mums. We discussed all baby related problems, we exchanged puree recipes and I knew I could always rant to someone about my sleep deprivation when my son was teething.

My husband did not have that support network; back at home, it would have been his mum and aunt answering all his questions. Instead, he often felt lonely and overwhelmed when he stayed at home with our baby boy. It didn’t help that in all families in our neighbourhood it was dads who worked and mums who stayed at home; people often criticised our family model.

My husband was not invited to play dates at our neighbourhood pool because mums found it awkward that it was him, not me, at home with kids. Consequently, our sons had fewer friends than other toddlers in the area.

When our eldest started preschool, on some days we would do school run together; on others, it was just my husband. While many mums said hello to me and we shared small talk about kids, they never talked with my husband.

It was the same with the very few other dads who were in charge of the school run. However, I observed that while local dads would always meet a life-long neighbour or acquaintaince at the school gate, expat dads were always alone.

When we moved from Spain to Poland, my husband came across a new challenge: a language barrier. Suddenly, in Poland more mums were working and more dads did the school run, but my husband didn’t speak Polish and couldn’t engage in conversations.

I decided to search for other Spanish-speaking families in our area in order to make new friends and speak Spanish together. Unsurprisingly, once again in all expat Facebook groups it was mostly mums discussing schools, childcare and healthcare in our town.

My husband was not really convinced about the whole idea of meeting other expat parents, since it was something he had never done back in Venezuela. Back there, life was simple; he socialized with his family and life-long friends. When someone had children, they kept on socialising with their family and life-long friends; they simply brought their children with them to family gatherings, day trips to the beach and all the other family events.

In Venezuela even children’s parties are more oriented to family and adults; right, there is a piñata and a cake for kids, but also alcoholic beverages for adults.  After the birthday boy or the birthday girl goes to sleep, the party can last until late into the night, with drinking and dancing. In Poland, children’s birthday parties are drop offs and are usually celebrated at fancy soft play centres, not at home.

Moreover, in my town there are many child-friendly events that my husband has never seen back home. Playgroups, theatre shows, a wide variety of extracurricular activities, kid & parent arts workshops and martial art sessions … In Venezuela, on a typical Saturday my husband would go to the beach with his friends and just take kids along. In Poland, our Saturdays may involve a storytelling session in the library early in the morning, taking our kids to a drop off party in the afternoon and having a friend from school for a sleepover.

When I was an expat mum in Spain, I often discussed lifestyle differences with other Polish mums and we got together to do activities with our kids that we knew from our home country, like reading stories or baking typical Polish treats. Yet even when we reached out to other Latino families in our town in Poland, neither my husband nor his friends came up with similar initiatives. Even when we got together Spanish themed play dates or typical Latino parties, like Day of the Dead or 5th of May, it was always mums who were in charge of organising the whole thing, preparing food and making up games for kids.

Does my husband miss Venezuelan lifestyle? Definitely. Are there any initiatives in our town aimed at expat dads so that they could find friends and get some support? Unfortunately not.

For dads, it feels more awkward to reach out to strangers in Facebook expat groups and get together for coffee at a child-friendly café or a soft play area.

It feels awkward to make small talk at school gates where they are largely outnumbered by women.

Due to globalization, there are more and more people who move abroad with their families and even the areas that used to be ethnically homogeneous now have an increasing number of foreign-born residents. Unfortunately, most of the supports for these residents are for the mums, making expat fatherhood even more difficult than it has to be.

Dear mums: if you see an expat dad at a school gate, don’t be afraid to say hello. Tell your husband to approach him and have a little chat.

Dear dads: yes, I know it feels awkward to come up and start chatting with a stranger. But you don’t have to discuss your baby’s diaper rash. You can talk about football, local beer or anything else that comes up to your mind. A very lonely expat dad may think that it’s awkward, too, but later he will appreciate it.

You’re doing an amazing job when you raise our children far away from your extended family and their support.

You’re doing an amazing job when you take your kids to the park, to the cinema and to birthday parties despite a huge language barrier and stares from neighbours. When you let our 7 year old walk alone to school and go to scout camps like all the children in our neighbourhood do, even though it’s something you never did as a child and you always found it dangerous.

You’re doing an amazing job and we love you.