This year’s Summer Games in Rio de Janeiro are about to start and the eyes of the world will be focused on the Brazilian city as an array of the world’s biggest sports stars arrive to compete in a wide range of different events. However, the Olympic Games are about more than just sport. 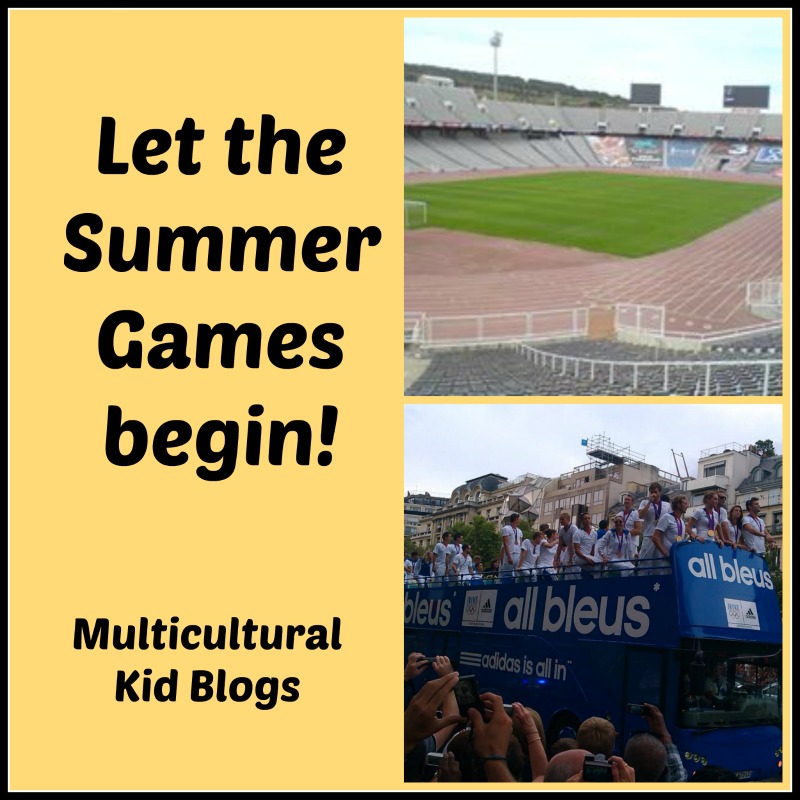 In the modern era, the Olympic Games have very much been about fostering a spirit of internationalism and peace as athletes from all over the world come together to compete. This type of ethos helps to explain why Multicultural Kid Blogs has decided to run a series of posts entitled Olympics for Kids.

As I said in a post that was part of a series that coincided with the 2014 Football World Cup in Brazil, international sporting tournaments can provide a means of exploring wider issues. These can concern the cultures and traditions of the competing nations or indeed sport itself. This can involve looking at recipes, games, traditions, famous people and so much more.

Over the years, I’ve been lucky enough to follow the Olympics while staying in quite a few different countries and this has provided me with some fascinating insights. Different countries seem to focus more on certain Olympic sports than others, and its fascinating to see how the same event can be talked about in reports from different places.

I have some vague memories of watching athletics events from the 1988 Olympics in Seoul, but the 1992 games in Barcelona are the first that I remember more vividly. I followed much of them while visiting family on holiday in Ireland, and particularly remember staying up late to watch the US men’s basketball ‘dreamteam’ with my cousins. Over a decade later, I was lucky enough to be able to visit the Olympic Stadium and Olympic Museum on a visit to the Catalan city. Even on short overseas trips, I tend to seek out opportunities to explore the local sporting culture.

The 1996 Olympics in Atlanta took place while a German exchange partner was visiting my family in Scotland, and I remember watching some of the big events during his stay with us. Moving forward to the 2000 games in Sydney, I ended up using the event as the basis for several English classes I taught at French secondary schools. Using the story of the swimmer Eric ‘the eel’ Moussambani as a starting point, I discussed the topic of whether the winning or the taking part is more important in sport. In some of their other classes, the students had been learning about Australian culture and discussing the significance of Cathy Freeman, an athlete from an Aborigine background, becoming one of the stars of the Sydney games.

I was living in France again during the 2004 Olympics in Athens, and remember watching many of the events on a small television in my flat in Lille. With being in France, I saw a lot more fencing, judo and handball than I would have done if I’d been in the UK. I was in a Prague for a conference during part of the 2008 Beijing Olympics, so had to rely on evening highlights rather than live coverage to keep up with events.

As I described in a post on my own blog Dad’s the way I like it, the 2012 London Olympics have a very special significance from a family perspective. On the last day of a work trip to Paris, my wife phoned to tell me that she was pregnant and indeed the fact that she’d been getting emotional while watching some of the events was one of the things that made her think it might be time to do a test. Within hours of hearing this exciting news, I was standing on the Champs-Elysees in Paris along side many thousands of people to greet their returning Olympians. There was much euphoria around me from people who were excited to see their sporting heroes paraded on open-topped buses, and it would be fair to say that the thought of becoming a parent was a source of euphoria for me as well.

This year’s Olympics have also taken on a special meaning from a family perspective as my wife gave birth to our second son earlier this week, so we have our second Olympic baby. The chances are that he won’t remember much of this year’s Olympics, so I guess I’ll have to tell him all about them when he’s older.

Welcome to our Olympics for Kids series! The Olympics are a wonderful opportunity to teach kids about the world and explore cultures together.
Today, you can find more about other posts about the Summer Games thanks to our participating bloggers: