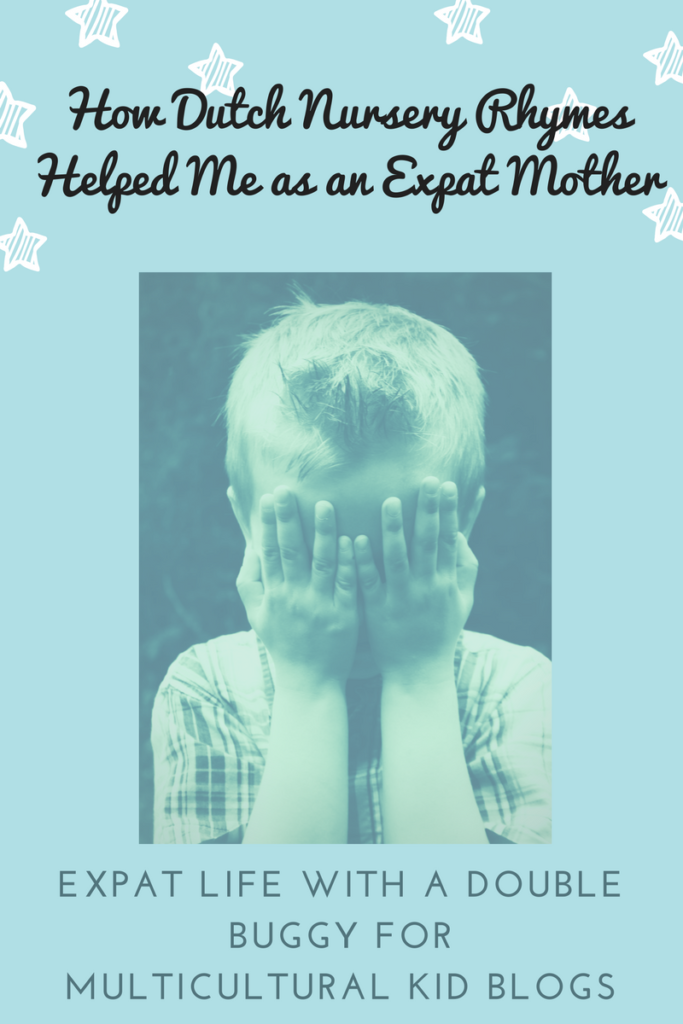 When I was pregnant for the first time I had a renewed interest in nursery rhymes; all those childhood favourites suddenly flooded into my head, breaking through the barrier that adulthood had erected. I wasn’t just remembering the English songs from my childhood, but I started learning Dutch nursery rhymes too.

Nursery rhymes are usually the first songs we learn as children, the tunes staying familiar to us long past the time when the words have faded from our adult memory. These rhymes are an excellent way to add vocabulary to a second language, a great way to learn new words – not just for children but for their mothers too I discovered.

I learnt that nursery rhymes are a strangely useful integration tool when you’re an expat; think along the lines of local mother and toddler groups and storytime at the local library. Without putting much thought into the why, I bought a CD of Dutch nursery rhymes a few months into my first pregnancy and listened to it numerous times. The CD had the words printed in a booklet so I could sing along to the new songs I learnt.

Some tunes I recognised even though the words were obviously different from the English version I was familiar with – tunes such as Twinkle Twinkle Little Star, known in Dutch as Twinkel Twinkel Kleine Ster. Some of the songs I heard were multicultural classics which the Dutch adopted and made their own, like Broeder Jacob known as Freres Jacques in French or Brother John in English.

However, most of the songs I listened to were completely new and traditionally Dutch. One that caught my attention early on was Witte Zwanen, Zwarte Zwanen because of the line “Wie wil mee naar Engeland varen? Engeland is gesloten. De sleutel is gebroken,” which translates as “Who wants to sail to England with me? England is closed. The key is broken.” A Dutch nursery rhyme featuring my birth country was sure to make an impact!

By the time my first born son was old enough for me to take him to the weekly story time at our local library, I had a few children’s songs in my repertoire that I felt confident enough to attempt singing when the librarian launched into a sing along session. I didn’t feel as left out and different as I would have done if none of the tunes had sounded familiar. By the time I started taking my youngest to the library story time events I could sing a mean ‘In De Maneschijn’, which my four year old still insists I sing almost every bedtime. Translated the title means ‘In the Moonlight’ and it goes like this:

You can listen to the song here.

So Dutch nursery rhymes helped me feel more of an integrated expat mother on the Dutch mother toddler scene. Learning these songs added many new words to my Dutch vocabulary – and I had a few Dutch history lessons as a bonus along the way.

Many Dutch nursery rhymes are traditional and their origins are no longer known. They have been passed from generation to generation for hundreds of years. These songs for children are a testament to the power of the spoken word throughout history. Despite their simple language many nursery rhymes, not just Dutch ones, hide a dark or political message within a catchy tune. The speculation about the popular Ring a Ring o’ Roses song is a great example of this. So I started looking up the origins of some of the Dutch songs I had learned.

Hoedje van Papier is commonly sung by Dutch children – it means Paper Hat. I learned that the song stems back to 1831 and the reign of King Willem I, who was facing the threat of a rebellion. He called up 80,000 soldiers to fight but had a shortage of military uniforms for them. Hence, the soldiers were given paper hats instead of leather or cloth hats. And that’s where this funny rhymes about paper hats comes from.

Nine years after I first became a mother, Dutch nursery rhymes still play a part in my daily life. As I said my youngest is a bedtime song enthusiast and in addition to In De Maneschijn you’ll often hear me closing out the day by singing Slaap Kindje Slaap as he falls asleep at night, a Dutch lullaby about a baby and a sheep. Being able to sing nursery rhymes in two languages to my children is definitely one of my favourite parts of being a bilingual mother.

Welcome to our Olympics for Kids series! The Olympics are a wonderful opportunity to teach kids about the world and explore cultures together.
Today, you can find more about other music posts about various countries thanks to our participating bloggers: