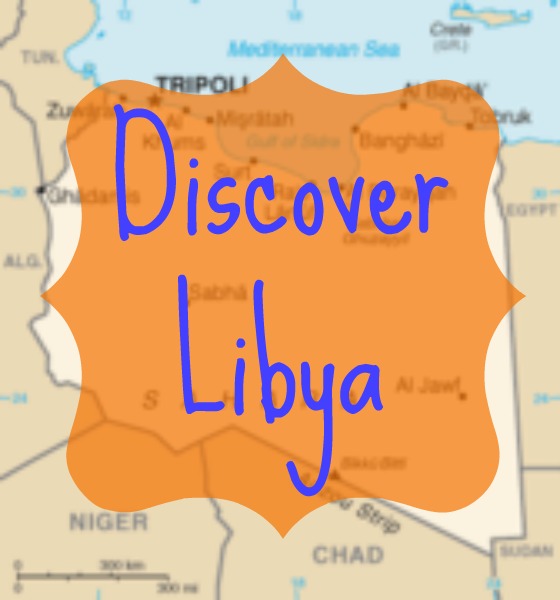 Each month we will feature a country and host a link party to collect posts about teaching kids about that country–crafts, books, lessons, recipes, etc. It will create a one-stop place full of information about the country.

Since it’s Ramadan, we thought we’d learn about Libya today.

Libya (Arabic: ليبيا‎‎), officially the State of Libya is a country in the Maghreb region of North Africa.  It is bordered by the Mediterranean Sea to the north, Egypt to the east, Sudan to the southeast, Chad and Niger to the south, and Algeria and Tunisia to the west.

The largest city and capital, Tripoli, is located in western Libya and contains over one million of Libya’s six million people.

Libya has been inhabited by Berbers since the late Bronze Age.

The Phoenicians, Ancient Greeks, Carthaginians, Persians, Egyptians and Greeks variously ruled it before it becoming part of the Roman Empire.

Libya was an early center of Christianity. After the fall of the Western Roman Empire, the Vandals occupied it until the 7th century when invasions brought Islam and Arab colonization. In the sixteenth century the Spanish Empire and the Knights of St John occupied Tripoli, until Ottoman rule began in 1551.

Libya was involved in the Barbary Wars of the 18th and 19th centuries. Ottoman rule continued until the Italian occupation. Libya became an independent kingdom in 1951. 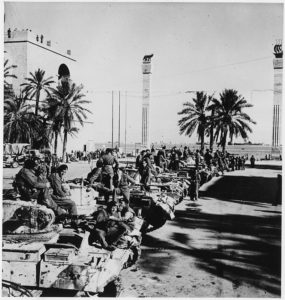 In 1969, a military coup, coordinated by Muammar Gaddafi, overthrew King Idris I. The Libyan Civil War of 2011 overthrew his power. An agreement to form a unified interim government was signed on 17 December 2015 by various governing groups and since 2016 the Government of National Accord (GNA) is the new ruling party.

The original inhabitants of Libya belonged predominantly to various Berber ethnic groups; however, the long series of foreign invasions – particularly by Arabs and Turks – have had a profound and lasting influence. Today, many Libyans are a mixture.

The official language is Arabic. Various Berber languages are also spoken. Both Berber and Arabic languages belong to the Hamito-Semitic family.

Reflecting the ” nature of giving ” (Arabic: الاحسان‎‎ Ihsan), amongst the Libyan people as well as the sense of hospitality, recently the state of Libya made it to the top 20 on the world giving index in 2013. In a typical month, almost three quarters (72%) of all Libyans helped somebody they did not know – the third highest level across all 135 countries surveyed.

Basic education in Libya is free for all citizens and is compulsory up to the secondary level. The adult literacy rate in 2010 was 89.2%.

After Libya’s independence in 1951, its first university – the University of Libya – was established in Benghazi by royal decree. Since 1975 the number of universities has grown from two to nine.  Since their  introduction in 1980, the number of higher technical and vocational institutes has risen to 84 (with 12 public universities).

This is a brief introduction to Libya. For more information or suggested activities check out any of these wonderful posts shared below.

This month we are learning all about Libya, so link up below any old or new posts designed to teach kids about Libya–crafts, books, lessons, recipes, music and more!