Several years ago my family and I learned about the wonderful country of Tunisia through a T-shirt craft project. Not only did Tunisia’s flag make for a great design (see picture below), but we discovered some amazing facts about this nation, the smallest in Africa. Tunisia, which is bordered by Algeria, Libya, and the Mediterranean Sea, is considered the only full democracy in the Arab world. Read on for 10 more interesting fun facts about Tunisia! 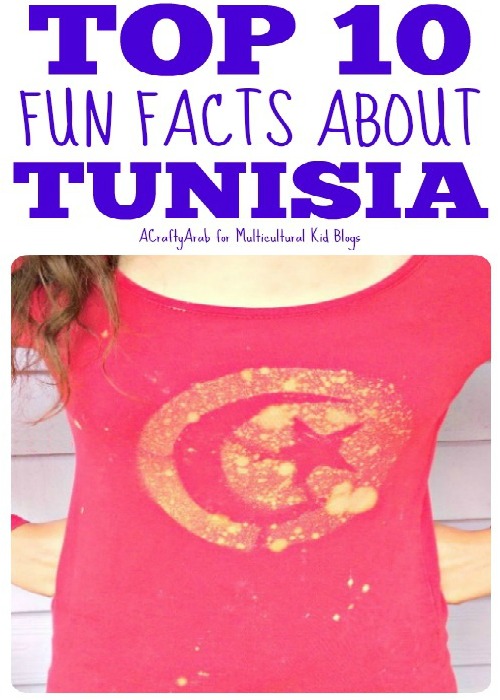 9. Before the country of Tunisia was created, the area was called Ifriquiya or Africa.

8. El Djem is the 3rd largest Roman ruin in the world. It is almost as big as the Colosseum in Rome but even more impressive is that it can be seen for miles due to the size of the little houses in the small town around it.

7. Domestic violence is a crime. The Law of Eliminating Violence against Women is the first piece of legislation ever passed by the Tunisian government which criminalizes domestic abuse.

6. The language in Tunisia is Tounsi, a dialect of Arabic.

5. El Ghriba synagogue is the oldest in Tunisia and still in use today. One of the legends associated with its founding claims that either a stone or a door from Solomon’s Temple is incorporated into the building.

4. Food is spicier than the rest of the Arab world; shakshuka and couscous are staples.

3. Matmata is a place in Tunisia where people live in underground houses. Its subterranean dwellings were featured in the Star Wars movies.

2. Souad Abderrahim was voted the first female mayor in the Arab world on July 3, 2018.

1. The Tunisian National Dialogue Quartet won the 2015 Nobel Peace Prize! The Tunisian General Labor Union, the Tunisian Confederation of Industry, Trade & Handicrafts, the Tunisian Human Rights League and the Tunisian Order of Lawyers were critical in building a democracy in Tunisia.

Welcome to the fourth annual Middle Eastern and North African Heritage Month blog hop from Multicultural Kid Blogs! Visit all the participating blogs below for great resources on teaching children about the heritage of this region. Don’t miss our series from last year, 2016, and 2015!