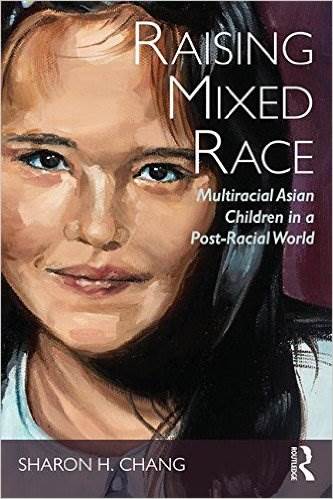 Sharon H. Chang, a multiracial Asian woman, advocate, and scholar, delves deep into race and identity in her new book “Raising Mixed Race: Multiracial Asian Children in a Post-Racial World” [Routledge].  Released in December 2015, Chang interviewed 68 parents of 75 young multiracial Asian children and compiled her findings into one comprehensive book. The need for research and guidance in this arena is such that her book ranked #1 as an Amazon New Release (Sociology and Asian American Studies categories) and sold out within its first few days of launch.

In an interview with Multicultural Kid Blogs, Chang provides insight into her groundbreaking book on raising mixed race children.

MKB: What inspired you to write Raising Mixed Race?

Chang: Frustration. When I was growing up as a young mixed child I never saw my reflection in society’s mirror. When I met my husband, also a mixed-identified person, his experience had been the same. I really, truly thought that things had changed given what seemed to be more interest in multiraciality marked by the shift of allowing “2 or more races” on the 2000 Census. Yet when I gave birth to my multiracial son in 2009 and shortly thereafter set out to find books, toys, playthings, learning materials, TV, film, etc. that would reflect our family’s sociopolitical and racial experience, I found practically nothing. I couldn’t believe after having lived decades in this country (and knowing that mixed people have been here far longer) that my family and families like ours still barely registered in the public psyche. That’s when I knew it was time to try to do something myself.

MKB: Who could benefit by reading this book?

First: Mixed race people of all mixes. Even if you’re not a multiracial person of Asian descent I think you’ll still find this book incredibly useful. I’ve already been told as much by many readers who have no Asian heritage. The reason why is because there’s so little out there addressing what it’s like to be a mixed person in a racialized society using a critical race lens. We get a lot of multi-culti stuff, ID angsty stuff, Pollyanna postracial stuff, etc. But we don’t often get stuff that takes us deep into the racist belly of this nation and shows us where we sit in the social political landscape in relationship to #BlackLivesMatter, anti-Black and Brown racism, xenophobia, Islamophobia, etc.

Second: Any critical person that intersects with mixed race children which is going to be more and more people, let’s be honest. Not just parents, but educators, administrators, healthcare providers, therapists, social workers, immediate and extended family, friends, and more. There’s so much erasing, denial and avoidance for mixed children that comes from society, but also very importantly from the people directly around them. If we care about supporting these children, it is incumbent upon us to learn about their lived realities and unique needs.

MKB: Why did you decide to focus mainly on children versus adults for your research and book?

Chang: I had been working in early childhood for over a decade in various capacities: as a teacher, parent educator, administrator, and business owner. My master’s degree is in Human Development with an Early Childhood Specialization. I had known for a long time, and learned even more deeply in graduate school, that those first years of life known as “the critical learning years” are foundational and formative in shaping who we become. But in all my work and studies I saw very little acknowledgment of what happens around race during those critical years. This knowledge gap persists despite the fact we live in a highly racialized world and race is one of the most salient factors in our day-to-day existence. Then of course I had my son, started thinking about all this from a very personal place, and all of sudden the “stars aligned” if you will. I suddenly saw early childhood as a very pivotal time when we all learn about race. I also saw adult denial – of this learning window as a time when children glean their first racial lessons – as very dangerous. I then started thinking of early childhood as a critical point of intervention for undoing racism. Instead of spending all this time undoing what we’ve learned as adults, what would it look like if we learned things differently in the first place? And that’s how I ended up honing my focus in on children.

MKB: What were the most unexpected or interesting findings from your research?

Chang: There were quite a number of unexpected and interesting findings that resulted from this research. But to me one of the most disturbing discoveries – though in retrospect probably not so surprising – was that mixed children of POC (people of color) and white heritage experienced some of the highest rates of racial discrimination from their own white family members. There is a common public perception that mixed folk of white descent are solely privileged being close to white family. Of course there is often increased socioeconomic access for these children, but this turns out to be only part of the picture. Close proximity to white family can also be very racially violent, and the toll of having to deal with discrimination coming at such close range from someone a mixed child holds a valued relationship with is very, very high.

The other fairly alarming discovery was the degree to which even highly educated parents (middle class to affluent, whites and often people of color too) had been indoctrinated into white dominant thinking with very little understanding of what race and racism really were. For instance, I often watched interviewees exercise colorblindness, excuse or laugh off other people’s racist behaviors, and deny their own racial experiences all the while waxing extremely poetic talk about their children’s mixedness as the end of race. The parents’ underdeveloped understandings left them fairly unprepared to parent their multiracial kids transformatively and left their parenting vulnerable to damaging internal and external influences.

MKB: What do you think are the biggest misconceptions about mixed race people?

Chang: Twofold. (A) That mixed race people equal the end of race and racism. I can’t tell you the number of times I’ve listened to, “Oh well one day we’ll all be mixed and brown like Brazil anyway.” What a ridiculous notion. Brazil is incredibly racist; mixing has not erased the inequities rooted in its past as a nation that traded more slaves than the U.S. The existence of “ethnically ambiguous” looking people alone does not somehow magically and simply unravel centuries of deeply embedded, pervasive racial inequity.

(B) That multiracials all come from some tragic story and are cursed to a fate of forever confusion and self-doubt – this is also ridiculous. Multiracial peoples represent stories as vast and different as any so-called racial group. Some are sad stories, some are not. Some of us may be suffering identity angst, some of us are not. The truth is the “tragic tale” stereotype is articulated out of society’s angst about crossed racial lines and leaves us little room to just be, as well as tell our own stories in our own words.

MKB: You’ve stated that the conversation around mixed race is often ignored in our society. Why do you think this happens? What can be done to change this?

Chang: Genuine, deep conversations about mixed race are still often publicly ignored because society is stuck in a monoracial way of thinking. This is a way we have been taught to think for hundreds of years by white elites in power — that people can be divided and ordered into a handful of single raced groups (i.e. Black, Native, Pacific Islander, Latino/a, Asian, White). This racial order, arranged in a hierarchy where whites are at the top and Blacks are at the bottom, is the foundation upon which U.S. society is built. To challenge those boundaries is to shake the very ground we stand upon. The thought causes so much fear and anxiety, confusion and bewilderment for most people (e.g. Who’s white? Who’s POC? How do we collect data? How do we form racial groups to demand change? How do we write equity into policies and law?) that we often end up just shutting down the conversation completely and going back to what we know. With mixed race being the fastest growing identification among youth, shying away from disequilibrium is not going to work for much longer. Indeed it is already not working.

What can we do to change? Start listening. Make room at the table of our national race conversation for mixed-identifying people and multiracial issues. Allow mixed race peoples to speak in their own voices instead of being spoken for.

MKB: What messages you’d like readers to leave with after reading Raising Mixed Race?

Chang: These days it’s got to be this – please please steer clear of those Pollyanna post-racial narratives/beliefs about mixed race being the end of race and racism. First, it’s simply not true. As I show in Raising Mixed Race, other nations with long histories of racial mixing still struggle mightily with prejudice and oppression; mixedness did not “solve” the problem. Second, post-racial beliefs are super erasing of the voices of multiracial people themselves who are living very diverse and real experiences often full of their own pain. Third, post-racial beliefs are incredibly hurtful to non-mixed people of color who still suffer greatly from pervasive discrimination in every sector of society. We are nowhere near being post-race and leveraging mixed race bodies, and to say we are is colorblind and deeply damaging.

MKB: What are your plans regarding further studies about race?

Chang: I’m currently working on a new book with sociologist Joe R. Feagin. We’re looking at Asian/American women, sexism and gendered racism in the U.S. Right now I’m in the process of interviewing – what’s looking to be – around sixty politicized Southeast, South and East Asian women ages 15-75 on their experiences, their lives, their work, and their resistance. I’m very excited about this project. It should be out hopefully by 2017-2018. Fingers crossed!

Be sure to check out our Multicultural Parenting Pinterest board.

Maria Adcock is the founder of BiculturalMama.com - a site covering multicultural parenting with a focus on Asian American culture. She is the author of "It's Chinese New Year, Curious George" (January 2023). Maria lives in New York with her husband and two children.