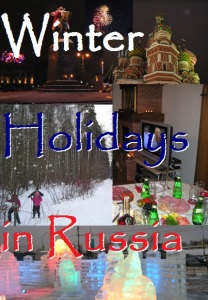 Winter Holidays in Russia or The Lucky Russians

We Russians are quite proud of our winter holiday celebrations: the duration and scale of them is definitely impressive – the more the merrier! In general the winter holidays are the most fun and the longest. People go skiing, sledding in parks and forests, skating on skating rinks that appear all around during the winter, play snowballs, build snow fortresses, snowmen (снеговик) and snow women (снежная баба) and visit exhibitions of snow and ice sculptures in parks. Everything is illuminated and decorated.

In Russia before the 1917 Revolution Christmas was widely celebrated on December 25th. The Christmas tradition of a tree with ornaments was borrowed from Germany and it was a very family-oriented holiday with lots of presents and sweets for the kids.

When Soviet Russia went through the change from the Julian calendar to the Gregorian calendar, 13 days were lost. February 1, 1918, became February 14, technically moving Christmas from December 25th to January 7th. However at that time, Christmas (as all other religious celebrations) was banned. The Christmas tree became a New Year’s tree and St. Nicholas became Grandfather Frost. Later on, in the 1930s he gained a companion  – his granddaughter the Snowmaiden.

As I look at it – Russians got insanely lucky. Now we happily celebrate the European Christmas on the 25th of December (as Europe is much more accessible to Russians now and is a famous destination for winter vacations). Towns and cities are festively decorated, the New Year’s trees are already up and illuminated, and Yolkas celebrations for kids are all around. But that is just the beginning of the winter celebrations.

New Year’s is by far the biggest winter holiday. It starts early evening on December 31st with the overfull table (стол ломится – “the table is about to break” – would accurately describe the situation): salad “Olivier” (Оливье), cold meats, caviar, cake and champagne. Right before midnight comes the president’s celebratory speech on TV and the Kuranti chime 12 times (Куранты – the clock on Red Square). These are the quintessential attributes of the festive winter holiday celebration of New Year’s Eve at midnight on December 31st.

Many families buy small sparklers and confetti poppers that are used right around midnight, as well as fireworks that can be heard for most of the night.

The gifts are usually exchanged either earlier in the evening before sitting down at the table, or after midnight. Many families especially those with younger kids put the presents under the tree. Some services can be hired, when a Grandfather Frost and Snegurochka can come to your apartment/house and bring the presents to the children in exchange for a poem or a song.

Then comes more food and lots of TV – watching and the most traditional shows are:

“Blue Lights” (Голубые Огоньки) – a concert style program that lasts several hours with lots of songs, jokes and appearances of all famous stars.

The celebrations do not end on the 31st. On January 1st – after sleeping late because of the long night of celebrating, a visit to relatives or friends is a common thing. That means more food, gift exchanges and celebrations.

A couple of days after the New Year’s celebrations, we begin the Christmas ones. In the Russian Orthodox church, Christmas is celebrated on the night from the 6th to the 7th of January, due to the calendar change after the revolution. For those who follow the religious traditions a lent is observed before Christmas (for 30 days), so the New Year’s celebrations must be vegetarian. On Christmas, you will either go to church for an all night service or you will watch the service on TV, and will wait till the first star comes out to eat and celebrate.

No traditions of presents has carried over into modern day Christmas, but the Christmas tree will still be standing in the house. Kids can also go to other houses/apartments Калядовать – Kaliadovat – which means they will sing songs to celebrate Christmas, and get treats from the adults. In the US the Halloween trick-or treating and Christmas caroling mixed together will be a good representation of this tradition. Kids can also be dressed either festively or in costumes. This is a tradition that is being revived and is not widespread. It is usually done by church-going kids. It used to be a big tradition among poor kids before the revolution, and was one of the ways they got small change and sweets from their rich neighbors.

Old “New Year”?? Isn’t that an oxymoron? Do you know what THAT is? If you ask a Russian or former Soviet person, they will say: “Oh, yes!” As Russians are quite good at prolonging the holidays in the 1950s to 1960s, the holiday of the Old New Year began to be celebrated. It that takes place on January 13th (which used to be January 1st, according to the Julian calendar). Everyone uses this as another chance to hang out with friends and family to eat and drink together. The Christmas tree is kept at least until this day,but it is usually taken only later after the Epiphany celebration is over.

You should know that usually starting January 1st for about 2 weeks most people do not work, all government services are closed and while stores and other businesses involved in the celebrations are working overtime, most people are staying home or going on vacation for the full two weeks.

The period from Christmas (January 6-7) to Epiphany (January 19) is called Svyatki (Christmastide).

During this time everyone is back to work in modern Russia, and this part is not taken as seriously as the big Christmas and New Year’s celebrations, but the traditional way was to celebrate with songs, caroling and fortune telling (although during Soviet days is was banned, it was still always done in secret). Epiphany is celebrated with a big church service with consecration of water. The blessed (Holy) water is believed to have magic powers and people drink it to help with ailments and sprinkle it around the house to “clean” it from evil spirits. And the next day after Epiphany (January 20) is the last day for the New Year tree to be taken down.

To round out the winter holidays, at the end of February Maslennitsa (Buttery Week) is celebrated. It is a pagan holiday and involved a huge celebration before the revolution. During that week nowadays, lots of pancakes are made and eaten: pancakes with sour cream, honey, caviar and various other delicious fillings. Lots of outdoor fairs with songs, games and entertainment are organized all across the country. The last day of the week is Forgiveness Sunday; all the people ask forgiveness from each other for all the sins and misbehavior. The ritual involves one person asking for forgiveness, then kissing each other on the cheek three times, and the other person saying that God will forgive ( Бог простит). The next day is the beginning of the strictest and longest 40 day Lent that lasts till Easter. 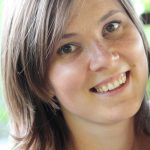 Anna Watt is originally from Russia and majored in Education and Linguistics there. She lived in France where she received her Master’s Degree in International and Interactive Communication. Anna speaks fluent Russian, English and French and also knows some Spanish, German, Japanese and Italian. Anna loves education, languages and technology, so she is always involved in all three. Anna has always been involved in supporting and promoting the study of the Russian language, as well as introducing Russia’s language and culture to a variety of people world-wide. As a mother of young girls her recent project is books and a blog Russian Step By Step Children geared towards kids living outside a Russian-speaking country.

Partner at Russian Step By Step
Anna Watt is originally from Russia and majored in Education and Linguistics there. She lived in France where she received her Master’s Degree in International and Interactive Communication. Anna speaks fluent Russian, English and French and also knows some Spanish, German, Japanese and Italian. Anna loves education, languages and technology, so she is always involved in all three. Anna has always been involved in supporting and promoting the study of the Russian language, as well as introducing Russia’s language and culture to a variety of people world-wide. As a mother of young girls her recent project is books and a blog Russian Step By Step Children geared towards kids living outside a Russian-speaking country.