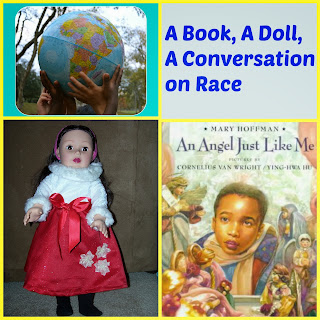 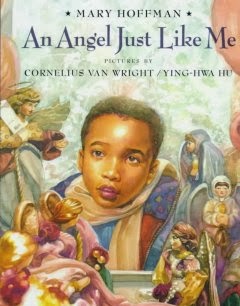 While reading An Angel Like Me by Mary Hoffman, my mind thought of instances in my own life and stories I have heard from others about finding dolls, angels, role models that look like you and how that can be hard in our society. The book is about a boy who wonders why the angel that they always put on the top of their tree is white with golden hair and blue eyes and female. Since the angel is broken he decides he will find another one–one that looks like him. He spends his free time after school looking and discovers that all the angels are female and white. He decides to ask Santa Claus for help. When he waits in line for Santa at the mall, he thinks about how the Santa is white as well. Just before his turn they switch Santa and this time it is someone with brown skin like him and he happens to know him. After deciding on a star for the tree topper since stars are the same for everyone, he receives a gift from Santa–an angel that looks just like him.

Now I have a friend who I use to work with and who I have gone on vacation with who collects black/brown angels, because they are so hard to find (she is a black woman), so this story immediately took me back to the first time I visited her house and saw her collection. I remember at the time wondering why in this day and age  decorations like angels and nativity figurines are not made in all the races.

Of course there is also the media playing into the image of a white Santa Claus and for that matter a white Jesus. Just this month, Megyn Kelly, a Fox News host assured her viewers that Santa Claus is white and that Aisha Harris, a columnist on The Slate who shared her own childhood confusion between the brown skinned Santa Claus at home and the white one on television and the malls in her column, is “off the rails”. Kelly goes further to state that Jesus is also white. Considering where Jesus was born, most likely he was not white, but the truth is we do not know the race of Jesus. The race of Jesus has been argued since the second century. (Source) The same can be said for St. Nicholas. St. Nicholas was a Greek bishop. He was born and lived in a town that is now Demre, Turkey. Chances are both men had a shade of brown to them, but we do not know for sure. We all assume they are the race we see them pictured as in the movies, television, artwork, etc.

Now this year my daughter asked Santa for a doll that looked like her. She wanted a doll with brown hair and brown eyes. It is amazing how hard it is to find a doll with brown eyes. My mother told me about having the same wish as a child and back then it was near impossible. It is hard to believe that a white child would have a similar issue to the child in Hoffman’s book, but she did. I never thought of it as a child. Of course I had blondish brown hair and blue eyes, so dolls looked something like me–well except that my most loved dolls were the ones my mother made me and they tended to not look like me. (One had red hair and green eyes and the other dark brown curly hair and blue eyes.) I did find a doll for her or should I say Santa did and I did not go the American Girl route where they make it how you want it. 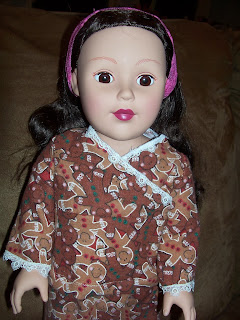 A couple of weeks ago, some Multicultural Kid Blogs bloggers were having a conversation about The Guardian Princesses. Daria of Daria Music commented on how once again Native Americans or indigenous people were not represented. Daria and I had a bit of a conversation on the post. Daria’s point being  that she has a hard time finding role models/characters for her goddaughter that actually look like her. Daria said, “Recently
bought a puzzle for my Godchild that had princesses and one was a
Pueblo girl. It was the first time “she” was among a group of heroes.
Very empowering for girl’s self-esteem. I hate to see “my girls” miss
the experience of feeling honored, and empowered in pop culture.”

I have to agree with Daria (I usually do). It is important for all of our children to see themselves among the heroes for their self esteem. We need to push our limits in media and society so beauty is not just the skinny blond bombshell. Mary at Sprout’s Bookshelf shared her experience with An Angel Like Me in her 12 Days of Christmas Picture Books last year. She luckily found a black Santa decoration as well as a live black Santa to bring her son to visit and her friend sent them a black angel that looked like him.

Daria expanded her view by telling me about the two types of racism. The first is overt and what many of us think of as racism. The negative comments that make a child feel unworthy and truly ugly. The second is more subtle. It makes you invisible. This is where the race is left out of things like dolls, movies, etc. As Daria puts it, “The lie behind this is that ‘you are so unimportant, so meaningless, so useless that you simply don’t exist’. And for many of us, we often feel that inside.  ‘Gee, maybe we simply don’t deserve to be seen or heard, or even be alive.'” What an awful thought for anyone especially a child to have. Hopefully together we can all work at changing our society and world so this kind of hatred and ignorance does not exist. What are ways you fight racism or any of the -isms?

I have not even started on the gender issues that Hoffman shares so well in her book, but that will be another day.