Multicultural Kid Blogs is excited to announce the “kick off” of our World Cup for Kids series!  To get the ball rolling, we are hosting a photo contest from November 5 – 30.  We are looking for great photos of kids and soccer, so be sure to enter yours!

The winning photo (chosen jointly by readers and a panel of MKB judges) will be used as the logo for our series, which will run through next year’s World Cup.

To enter, upload your photo via the linky at the bottom of this post.  The winner will be announced on December 5.  Be sure to visit our series main page and World Cup for Kids Pinterest board.

The Importance of the World Cup

For some football is just a game, but for others it is a lot more than that. Although most people would agree that former Liverpool manager Bill Shankly went a bit far when he said ‘football is not a matter of life, it is much more important than that’, there can be no denying that football is a truly global game that provokes great excitement.

The World Cup, which takes place very four years, provides a great way of finding out not just about football in other countries but also different countries and cultures in general. This is something that can be part of school projects, youth group events or an at home activity. Given the rivalries that exist between certain clubs and countries, finding out more about the history and culture of rival teams and cultures provides a potential way of promoting greater tolerance and understanding.

As the World Cup is an event that brings together players and supporters from different parts of the world, it is an event at which lots of different languages are spoken. If you want to find out how to say World Cup in 36 different languages, you might want to read this article. There are also lots of links to educational activities related to the World Cup out there on the web, and the Language and Literacy for All website provides a good starting point if you want to check out a few ideas.

The 2014 World Cup will be in Brazil, so you may wish to look at some websites that provide information about the country so here are a few links: link1 link2. Lots of people in Brazil have been trying to improve their skills in languages such as English in preparation for the tournament, so it only seems right that the tournament should provide a reason to learn about language and culture in Brazil.

The ways of learning about Brazilian culture are endless. This could involve reading about traditional festivals and carnivals, listening to Brazilian music and cooking dishes that are popular in Brazil, or learning about traditional fairy tales from Brazil. One starting point for people interested in life in Brazil could be checking out Stephen Greene’s parent blog Head of the Heard where he discusses life living in Curtiba in the South of Brazil. Indeed, he has talked about the World Cup over the last year. 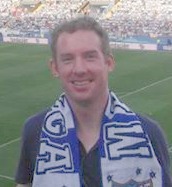 Jonathan is the blogger behind Dad’s the Way I Like It.  He created his blog to reflect on his experiences as a dad and how dads are represented in society.  He lives in North West Wales with his wife, son and a pet chicken. They are raising their son to be bilingual.  You can also find him on Facebook, Twitter, and Pinterest.

Go here to upload a photo directly from your computer. Please note: You may leave the “link” field blank.  If it gives you an error message, just ignore it!  You can also email your photos to multiculturalkidblogs@gmail.com