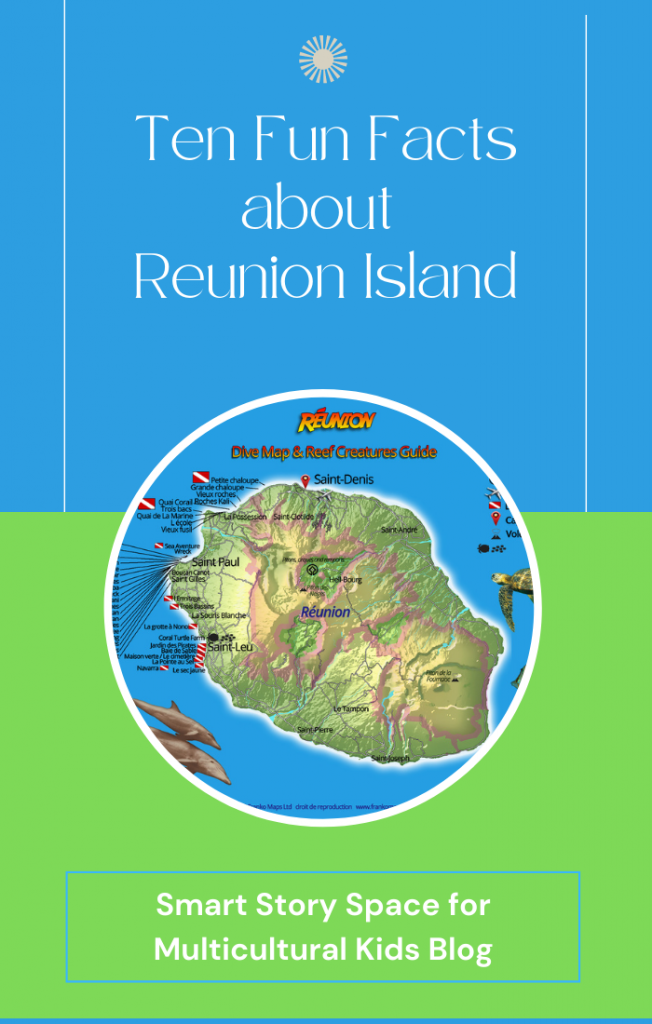 Reunion Island is part of the French territory, but there are so many different nationalities, coming from France, Mozambique, India, China, Madagascar, and the Comoros.  It makes this place totally unique, and you just have to travel there to learn more about these cultures. One island instead of 6 countries.

All the festivals from all the countries of origin of the inhabitants are celebrated. For example, you can observe Dipavali, or The Festival of Lights, on Reunion Island. It’s a major event for the Tamil culture. It symbolizes the victory of light over darkness.

Can you imagine living in a place close to an active volcano, Le Piton de la Fournaise; it has erupted more than 100 times since 1640! One day you can wake up and see smoke and even lava through your window. Yes, you can see it, because Reunion island isn’t so big, and it has an active volcano (as well as one dormant volcano). Its total coastline is just 207 km. Sounds scary to see flowing lava, right? But people from Reunion are used to it. Actually, it’s quite safe, as the burning lava flows directly into the ocean.

4. Tunnels carved out by lava flows

Have you ever visited tunnels, carved out by lava flows? Not many places can offer you this opportunity, but Reunion Island can. You can make unexpected and grandiose visits to tunnels that reveal geological mysteries of the island. They were created when the upper crust of lava cooled and the magma continued to flow. To visit those underground masterpieces you need to be accompanied by a certified guide.

5. Remote villages only accessible by helicopter

Reunion Island has hidden villages in its heart, so far away and high in the mountains that a bakery and grocery stores have to be supplied by a helicopter. You can get there only by walking or by helicopter. The first settlers of this place were runaway slaves. They chose these remote places as their refuge because it was so hard to get there.

6. The dialect spoken is French Creole

People speak a fascinating dialect of the French language on the island. It’s French Creole. During the colonization times, France imposed its culture and language on the captured territories, as well as its population. The Reunion Creole includes words from the following languages – Hindi, Malagasy, Portuguese, Tamil, and Gujarati.

7. A happy and vibrant place

On average, people live up to 76.4 years on the island. It’s a happy and vibrant place, full of joy and sunshine.

You can taste tea jelly at the tea plantation of the Labyrinth En Champ Thé (Translated as “In tea field”. It is a play on words with the similar sounding word “enchanté” meaning “enchanted”). Yes, it’s true. Reunion Island has its own tea plantation, where they grow black, green, white and imperial teas.

Reunion Island is a place where you can watch humpback whales, dolphins, turtles, and other unique sea animals.

The biggest land animal on the island is the panther chameleon. It’s extremely slow, that’s why in the local dialect it’s called Endormi which means “asleep”. Its color depends on the animal’s mood, surroundings, and location. It can get darker if feeling stressed.

Discover all these fun facts about Reunion Island and more in the children’s book series Nina & Eve in the Middle of the Indian Ocean!

If you would like to learn more about this beautiful and exciting island, its vanilla garden, hiking to the volcano, the French culture of coffee and croissants, see wonderful illustrations of the island landscapes and the main characters’ adventures, how they look for a lost puppy and go to a swimming pool birthday party, you can read “Nina and Eve in the Middle of the Indian Ocean“, an adventure story for children, written by Irina Skibenko.

10 Fun Facts About the Galapagos

10 Fun Facts about Vanuatu for Kids

Teacher, Author, Founder at Smart Story Space
Coming from Ukraine, I have travelled to around 20 countries. I am the author of 3 adventure stories for children (9-11 yrs old) with 17 years of teaching experience of the English Language. I graduated from Donetsk National University with Master's Degree in the English Language and Literature. 1 year ago, I founded Smart Story Space, where children master their English through reading my adventure stories and writing their own stories. My students come from different countries, so they have a maximum exposure to communication with foreigners. By creating and sharing their stories with each other they gradually gain more confidence, find their voice and become global citizens.