The Galapagos Islands, located about 900 km west of mainland Ecuador, live up to the hype. With breath-taking views and an abundance of wildlife, the islands are a popular bucket-list destination for many travelers. For our family, they provided the vacation of a lifetime. Here are a few fun facts about the Galapagos. 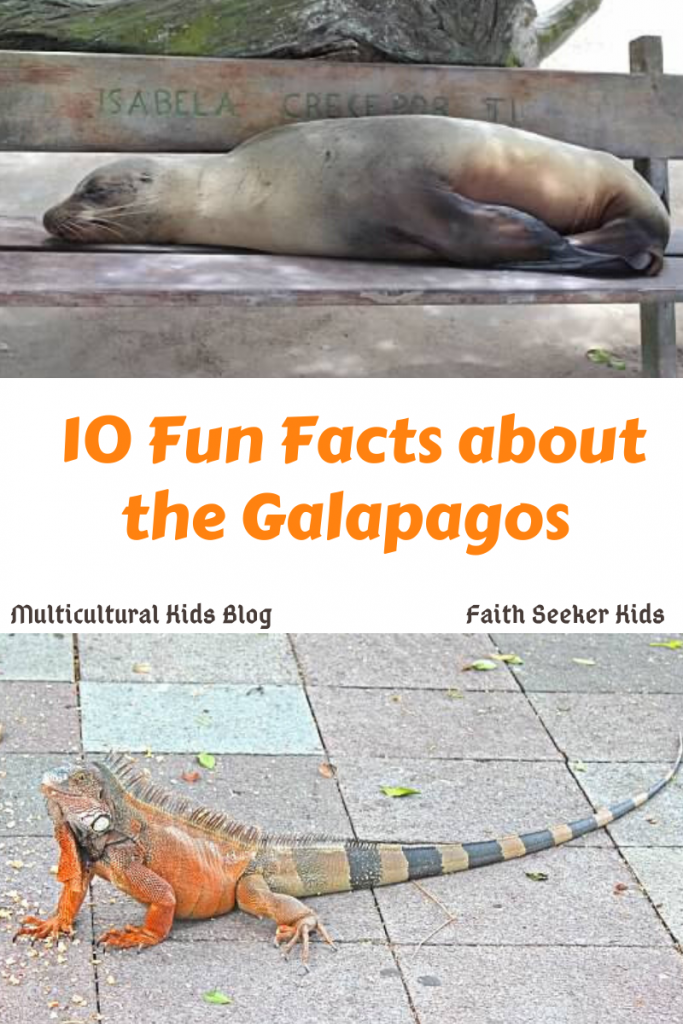 #2. Their Volcanoes are Active

Volcanic eruptions rising above the ocean’s surface formed the Galapagos Islands. The earliest islands probably appeared about 9 million years ago. They were located to the east of the current archipelago, but they are now submerged. The islands visible today emerged about 4-5 million years ago.

The largest island, Isabela, is made up of several volcanoes. While those volcanoes do erupt intermittently, the westernmost island, Fernandina, is the most active. Its most recent eruption was in 2017. Because the volcanic rock is basalt, which is quite fluid, the Galapagos volcanoes are more rounded (and less conical) than many others. And that makes them perfect for hikes!

#3. They Have Giant Tortoises

In 1570, cartographers created a world map with the Insulae de los Galopegos labelled. The name was probably derived from the 16th century Spanish galápago, which referred to a turtle, tortoise, or terrapin. If the story is true, then the name is a perfect fit! Giant tortoises live only in the Galapagos and on one other island in the world (off the coast of Tanzania). Moreover, evidence suggests that at least 15 giant tortoise species once lived on the Islands.

Giant Galapagoan tortoises can weigh over 400 kg, and they can live for well over 100 years. Sadly, whalers, buccaneers, and colonizers recklessly harvested the tortoises to near extinction. Because they could live for up to a year in a ship’s hold, tortoises provided fresh meat during long sea voyages. Historians and conservationists now estimate that poachers removed over 100,000 giant tortoises from the Galapagos islands in the early 1800’s. Luckily, 11 tortoise species still survive, and the Giant Tortoise Restoration Initiative is working hard to breed, rear, and return them to their native islands/habitats.​

#4. They Have Swimming Iguanas

The Galapagos Islands provide a habitat for the only marine iguanas in the world. Each marine iguana species has its own unique appearance, but many island visitors find them rather ugly. In fact, almost two centuries ago, Darwin described them as “disgusting clumsy lizards” and “imps of darkness.”

These distinctive iguanas feed on algae found near the shoreline, so their dives tend to be shallow and last for only a few minutes. However, they are capable of spending an hour underwater at a depth of 30 m or more. Even newly-hatched marine iguanas are capable of swimming, even though they usually don’t. Like most other animals of the Galapagos, they are not afraid of humans, so they are happy to swim along with snorkelers.​​

#5. They Have Birds With Blue Feet

Blue-footed boobies live on the western coasts of both Central and South America, but the Galapagos Islands are home to about 1/2 of the world’s mating pairs. The blue color comes from pigments obtained by their diet of fresh fish. Lipids and lipoproteins then help the body absorb and transport the pigments. That means malnourished boobies really do have lighter-colored feet, and foot color really does serve as a reliable indicator of health. Females clearly prefer mating with males who have brightly-colored feet, and males use those feet to their advantage. Check out this mating-dance video to see how!

Penguins live in a variety of habitats, and sources often state that all penguins live in the southern hemisphere. However, the Galapagos penguins — the only ones that can live just slightly north of the equator — are the one exception to that rule. Being a penguin is not easy. Natural predators (like snakes, hawks, and owls) are always looking for a tasty food source, and non-native animals (like cats, dogs, and rats) often destroy penguin nests. El Nino events also change water temperatures, which can negatively affect the penguins’ food supply. Despite the odds, the Galapagos penguins, though listed as “endangered,” continue to survive on several islands.

#7. The Islands Made Good Penal Colonies

It’s no secret that islands make great prisons. After all, there’s no need to install elaborate security measures when the geography, itself, makes escape nearly impossible. The first penal colonies in the Galapagos were established in the 19th century on the islands of Floreana and San Cristobal.

The third, and final, penal colony was established on Isabela Island near the end of WWII. All day, every day, the prisoners worked on building a wall. They carried sharp lava rocks for miles, and many prisoners died in the process. The wall, which never really served any purpose, now stands as a testament to the cruelty humans sometimes inflict on one another. Called the Wall of Tears (Muro de las Lágrimas), it measures about 65 meters high and about 100 meters long. An uprising in 1958 resulted in the deaths of both prisoners and guards. The Ecuadorian government closed the colony one year later.

#8. They Have Lots of Mangroves

Mangroves are small trees that grow in the brackish water found along coastlines. Their root systems usually grow above land and offer important feeding and breeding grounds for fish, birds, and invertebrates. Mangrove roots also offer protection from waves and erosion.

Each mangrove species has adapted unique methods for dealing with the low-oxygen/high-saline environments in which they grow. For example, some mangroves prevent salt from entering the root system in the first place. Others excrete salt through their leaves. Four types of mangrove grow in the Galapagos: red, white, black, and button.

#9. Galapagos History is Rather Vague

It seems possible, maybe even likely, that Indigenous peoples on the western side of South America knew about the Islands but, to date, there are no definitive archaeological findings to verify that claim. Thus, according to most accounts, the first person to step foot on the Galapagos Islands was the Bishop of Panama whose ship was blown off-course in 1535. Although the Islands showed up on that map in 1570, it would be the 19th century before anyone really took notice.

In 1807, an Irishman named Patrick Watkins was marooned on the island for two years. He eventually stole a boat and set out for Guayaquil with five slaves. But, when he eventually arrived on the Ecuadorian mainland, he was alone. No one knows what happened to the other passengers.

In 1832, Ecuador claimed the Islands and established General Jose de Villamil as the first governor. The settlement failed about 20 years later. Unfortunately, the animals they imported remained, wreaking havoc on the delicate island ecosystems. Other colonization efforts and business ventures during the 19th century also ended in failure, assassinations, and uprisings.

But not for long. In the early 1830s, Darwin spent five weeks in the Galapagos collecting specimens. However, when Origin of the Species was finally published more than two decades later, examples from the Galapagos made up only a tiny portion of the book. In that sense, the Darwin connection is slightly over-rated, even though it has certainly advanced eco-tourism. The Charles Darwin Research Station on the island of Santa Cruz also plays an extremely important role in understanding and conserving the valuable and diverse ecosystems found on this archipelago.

Fun Facts About the Galapagos Conclusion

The Galapagos Islands are incredible. The precious flora and fauna are both stunning and extraordinary. And many places offer a glimpse into pristine ecosystems that have largely avoided human impact. As tempting as it might be to lounge there forever, don’t plan on an extended visit. Short-term tourist stays are welcome, but acquiring the proper paperwork for longer stays is difficult. Even Ecuadorian citizens are not granted automatic residency in the Galapagos, and work visas are hard to come by. Instead, enjoy your visit and follow the rules. Let’s keep the Galapagos an enjoyable destination for decades to come.

Take a Fun Journey to the Galapagos Islands in Spanish Class

6 Magical Places to Visit With Kids in Ecuador