In recent years, words like “hygge” or “ikigai” have taken the Internet by storm. Hygge, a Danish word, refers to a feeling of coziness, spending time in a nice atmosphere with friends, while ikigai is a Japanese expression for finding one’s purpose in life. In 2019, I coincidentally added a new word to the ones already out there: niksen, Dutch for doing nothing, when I wrote an article for The New York Times called “The Case for Doing Nothing” which went viral in a short time.

I also wrote a book called “Niksen: Embracing the Dutch Art of Doing Nothing,” and while doing research for both the book and the article, I discovered something interesting: while hygge or ikigai are embedded in the culture they come from and are therefore hard to transplant anywhere else, the desire to do nothing and the ambivalence people felt about being seen as lazy was universal.

Disclosure: This post contains affiliate links. If you click and purchase, Multicultural Kid Blogs will receive a small commission that will be used towards maintaining the site.

Yes, niksen is a Dutch word, but some expressions and sayings were similar in nature worldwide. The Italians have dolce far niente, the Spanish have a siesta. The French have their flaneur – or someone who wanders around, preferably on the streets of Paris for no reason whatsoever. And in English, you can say, “doing sweet, sweet nothing,” or “lazy Sunday afternoon.”

And it seems to be hard-wired for us humans around the world.

The neuroscientist Marcus Raichle divided people into two groups: one was given a task to do, and the other was told to do nothing. And then he put them into fMRI machines. He was expecting the group with the task to show more brain activity than the other group. But the opposite was the case: brain activity in people with no task to do actually increased. This lead Raichle to a fascinating theory: that we have a special network in our brains that only becomes active when we do nothing. He called that the default mode network. His findings were repeated in people all over the world, no matter where they came from. 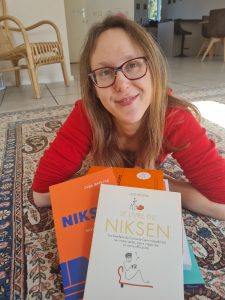 Niksen Is Universal for Kids and Adults

The desire to do nothing is universal. And you know who’s really great at it? Kids.

Kids from all over the world can play outside with simple things: sticks, stones, balls, or leaves. They can occupy themselves with almost nothing for hours. But, as probably every parent knows, it’s not as easy to let kids do nothing as it seems. I don’t know about you, but I feel near exploding when all I do is clean and cook and do laundry, and it might seem that all my kids do is lie around. This isn’t true, of course. The kids do a lot around the home, but there’s nothing like seeing someone niksening when you’re feeling so busy yourself, even if it’s your children, whom you love very much.

But if you feel the way I do. Here are two pieces of advice to consider, and as a result, it reduces your workload considerably.

First of all, lead by example. If we want kids to be readers, parents have to read (or at least that’s what I’m telling myself). Similarly, if we want our kids to really relax and do nothing, we have to do nothing where our kids can see us. It is easier to say than done, but not impossible.

Second, if we want to really enjoy more time off, it’s important to give our kids more chores and responsibilities. But wait, didn’t I just say that we have to let our kids do nothing more? Yes, we have to make sure not to sign up our kids for ten thousand activities (yes, it happens faster than you might think).

Parenting is also about finding a balance. If one person is doing a large share of chores in the house, that’s not only unfair, it will also make that person (who, let’s face it, is most often the mom) miserable and resentful. Fathers might do more work than they used to but still less than mothers. Yes, of course, they should step up more. But having kids take over some chores in the house can be good for them too and make them more responsible and have a positive effect on their self-esteem.

And niksen will also be good for you. As my mom tends to say, “anything you do, I won’t have to do.” And any chore you won’t have to will make you very happy and thus less prone to resentment when you see your kids doing nothing or doing something that doesn’t seem to have an immediate effect or result.

On the Carpool Karaoke, the talented American singer-songwriter Billie Eilish said that when she was little, her mom couldn’t make her go to bed if she was making music. The host, James Corden, was surprised to hear that and asked, “but was there ever a point where your mom said, you’re not making music, you’re just messing around?” to which Billie Eilish replied, “No, maybe music is messing around.”

I love this quote because it’s so true: creativity is often messing around. It’s not a concerted effort to solve a problem but instead letting your mind wander in a totally new direction. That’s where the best ideas happen, whether it’s in business, science, or art. That’s why it’s so important to let kids mess around without expecting results.

Hygge and Other Cozy Multicultural Traditions