When it comes to celebrations, Filipinos go all out. Christmas in the Philippines is not just celebrated one day a year, it starts in September. They call it the “ber” months, September, October, November, and December. They have the longest Christmas season in the world. Once September hits, Filipinos decorate their houses with colorful lights, Christmas trees, and lantern stars. Christmas songs will start to play as well. Here are some Philippine traditions during Christmas time.

Discover more fun ways to celebrate Christmas around the world. 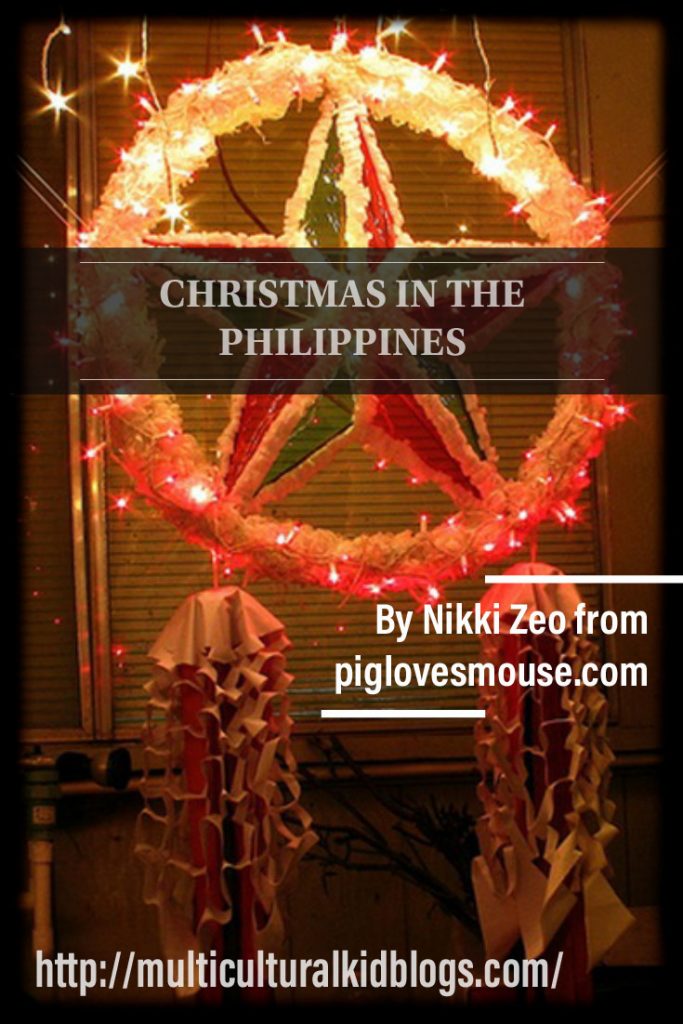 Feasting Through Christmas in the Philippines with Misa de Gallo

This tradition started in 1669 during the Spanish occupation of the Philippines. The Philippines was known to grow rice, coconut, and sugarcane. Farmers would work in the early morning hours to avoid working when it was really hot at noon. After the farmers worked they would still attend mass even though they were really tired. The priests eventually changed their mass time to early morning before the farmers started working as a compromise.

Now, the mass starts at 4am. Parols, star-shaped Christmas lanterns, are typically hung along the street to light the way for people who want to attend mass. The parol is meant to symbolize the Star of Bethlehem. The mass is celebrated in a formal manner, and the Gloria is sung along with other old church songs. There is a belief that those who attend all nine days of Simbang Gabi may have their prayers answered.

Churchgoers would buy Filipino delicacies at the churchyard afterward. Foods such as bibingka, puto bumbong, suman, latik, barquillos, otap and yema are cooked on the church grounds. Drinks served include salabat (ginger tea) and hot chocolate. Rice dishes are also very common since rice is very cheap and common in the Philippines.

This is a re-enactment of Joseph and Mary’s journey to find shelter. The actors are always adorned in Biblical clothing and they walk through the neighborhood searching for shelter. Families can request that they come by their homes so they can be a part of the Christmas story. The Panunuluyan would knock on each family’s door and ask for shelter. The family would then turn them away. In this way, the families who participate can feel like they are a part of the Christmas story. The couple then makes their way to the church where there is a stable and the ringing of the bells signifies the birth of Jesus.

In the Philippines, this is a huge feast held the night before Christmas day. After midnight mass, the celebration begins.

In the past, Spanish friars required Filipino Catholics to fast until Christmas morning, and this Christmas in the Philippines tradition reflects that history. After the last mass, churchgoers would prepare a feast that would start the Noche Buena Philippine Christmas tradition. Most would feast on cheese and ham. Others such as Filipino spaghetti, bibingka, puto bumbong, Filipino fruit salad, hot chocolate, lumpiang ubod, macaroni salad, menudo, fried chicken, kaldereta and sisig are among the foods served on Noche Buena.

This is when Filipinos visit their relatives on Christmas day. Parents dress their kids in fancy clothes and they receive pamasko (gifts) which are called Aguinaldo. Their pamasko is typically toys or money.

Filipinos are known for singing, and many are very talented. Almost every Filipino home has a karaoke machine.

People start caroling when Simbang Gabi begins. Children would form in groups hopping from one house to another. They sing a mixture of Filipino and English songs. They also play their own handmade instruments made using recycled materials like bottle caps and tin cans. In return, the carolers receive money or snacks to eat during Noche Buena. Sometimes carolers sing within crowds of people, which is always a nice surprise for everyone. Ca rolling can also be a charity event for some Filipinos to support the poor.

Celebrating the Day of the Three Kings

Christmas doesn’t end the day after Christmas. It ends 12 days after Christmas day. Also called Feast of Epiphany and Three Kings Day, this holiday is celebrated on January 6 and lasts an entire day. Three Kings Day also honors senior citizens which is then also called Pasko ng Matatanda. Three men in colorful robes on horses parade in the towns. Children line the streets to receive gifts from the Three Kings. After that, there is a mass. Following the mass, families exchange gifts with each other. Families also leave their doors open for others to share their meals.

The Filipino Belen is the Philippines version of the nativity scene. The name Belen is from the Spanish word for Bethlehem.

A Belen can be seen at the entrance of schools, businesses, homes, and churches. A parol would be hanging and some Belens would be handcrafted. They even have Belen making contests in the city of Tarlac.

Some handmade Belens have the Three Kings riding a carabao instead of camels. There may be coconut trees, and Joseph and Mary may be in tropical clothing instead of their traditional garb. This is what makes the Filipino Belen unique.

Monito, Monita is a traditional gift exchange that occurs weeks before Christmas begins. It is similar to Secret Santa in the United States. Multiple gifts are given, one every week to the person you have chosen from a name out of a bowl. Sometimes it is even one gift every day. This all depends on the group doing the gift exchange. The last day is called the Revelation day when you hand the gift to the person you have chosen and people get to find out who has been giving them their gifts.

Christmas Gift Traditions Around the World