When I first met my husband over a decade ago, all I knew about Malaysia was that it is a former British colony somewhere in Southeast Asia and hosts Formula 1 championships. I have learned much more in the years since. Now the time approaches to teach our kids more about the country where their dad was born and where so many of their aunties, uncles, and cousins live. And what better way to start than by learning some fun facts about Malaysia! 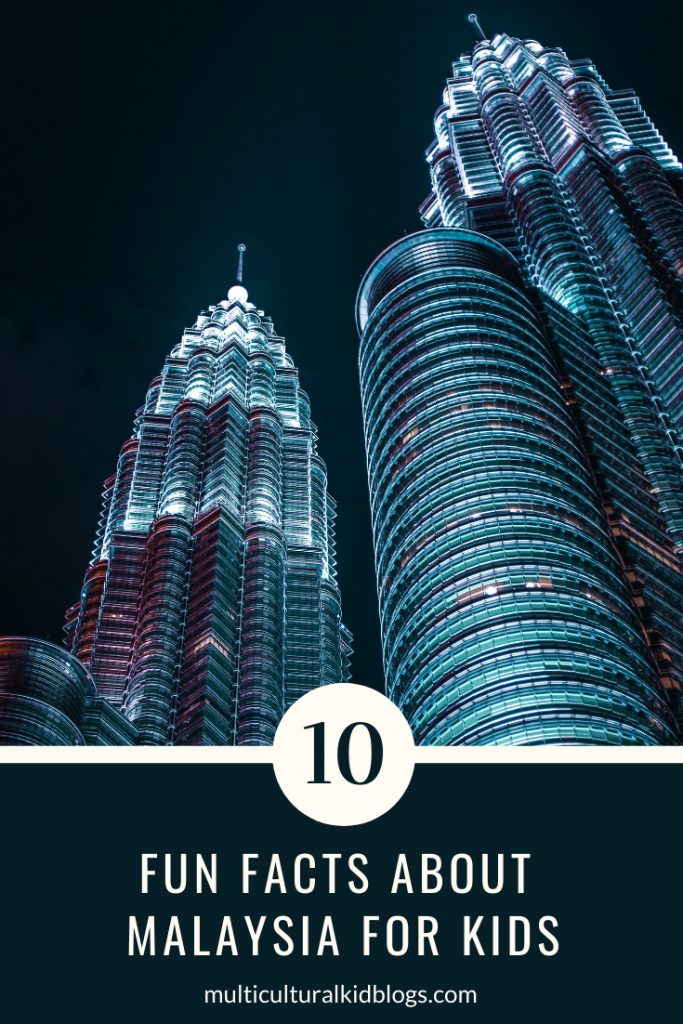 #1 It consists of two parts

Malaysia is the only country in the world that has territory on both the mainland of Asia and the Malay Archipelago that consists of over 25,000 islands. The island of Borneo, which Malaysia shares with Indonesia and the Sultanate of Brunei, is the largest island in Asia and the third-largest in the world.

#2 It is one of the most diverse Asian countries

While Malaysia is a Muslim country and the Malays are the largest ethnicity, the land’s position on the trading route between India and China means that it has always been a crossroads of peoples and cultures. Malaysia’s 32 million inhabitants are made up of Malays, Chinese, Indians, as well as various indigenous groups. Buddhism, Christianity, and Hinduism flourish alongside Islam.

It is this diversity that is the root of Malaysia’s vibrant blend of culture, language, and – of course – food!

Malaysia’s Taman Negara national park is a 130,000 million-year-old virgin rainforest. More than twice as old as the Amazon rainforest, it supports over 10,000 species of plants. It also supports several hundreds of animal and bird types.

#4 It has multiple royal families

Malaysia has not one but nine royal families – more than any other country in the world! The official head of state (Yang di-Pertuan Agong) is elected for a 5-year-term from the heads of the royal families, the Sultans. This unique political system makes Malaysia one of the very few elective monarchies on the planet. I’m sure you have heard of the only other one: the Holy See, that is, the Pope.

One of the most iconic landmarks of Malaysia’s capital, Kuala Lumpur, is the Petronas Towers. When they were completed back in 1998, they were the tallest buildings in the world. While the towers lost this status in 2004, they remain the world’s tallest twin buildings. The towers are connected by a sky bridge at level 41. Open to visitors, it offers some of the best views of the bustling city.

#6 Penang is the street food capital of Asia

Whenever you glance at an article on “best street food in the world,” the Penang region – in particular, its capital George Town – is always at the top of the list. Hundreds of hawker stalls offer a mouthwatering selection of Malay, Chinese, Indian, Thai, and other Southeast Asian foods. The best vendors have been in the business for decades, their recipes passed down from one generation to the next.

Fragrant rice cooked in coconut milk and served with fish or meat, peanuts, and often also egg, wrapped in a banana leaf. This is a dish called Nasi lemak. People consider it Malaysia’s national dish and they often eat it for breakfast (although any other time of the day is fine too). Perhaps typical for the country’s multicultural identity, Nasi lemak also has Malaysian Chinese (with pork), Malaysian Indian (with curry and without beef), and other variations.

#8 It has a beach for everyone

Malaysia is a great destination not only for its rainforests, modern cities, and amazing food. Located on the equator and comprising over 800 islands and archipelagos, it is also a fantastic beach destination. From iconic backpacker hideaways to luxury resorts and offbeat diving destinations to nightlife hotspots, everyone will find a beach they love.

On the island of Borneo, the pristine rainforest of the Gunung Mulu National Park hides a giant cave system. In particular, the Deer Cave is the largest cave passage in the world. Some claim that the corridor of the cave could fit five rows of eight Boeing 747 jetliners, parked nose to tail. Of course, not something anyone has ever tried!

#10 It has hidden treasures, literally

It is believed that one of the world’s richest treasure troves lies somewhere in the waters of the Strait of Malacca, off the coast of modern-day Malaysia. Back in 1511, a Portuguese ship carrying treasures looted from the palace of the Sultan of Malacca to the Portuguese king was wrecked in a storm. Despite countless attempts in the following centuries, the coffers of gold, diamonds, and precious stones lie undiscovered together with the ship that carried them.

I hope you enjoyed these fun facts about Malaysia!