When I was thinking about what countries, regions or cities to write about, I immediately thought about Baguio City, Philippines. It is the city I was born in. Writing this post gave me an opportunity to learn more about my hometown. There are so many fascinating things about this wonderful city of mine but I here am going to narrow it down to just 7 major facts. 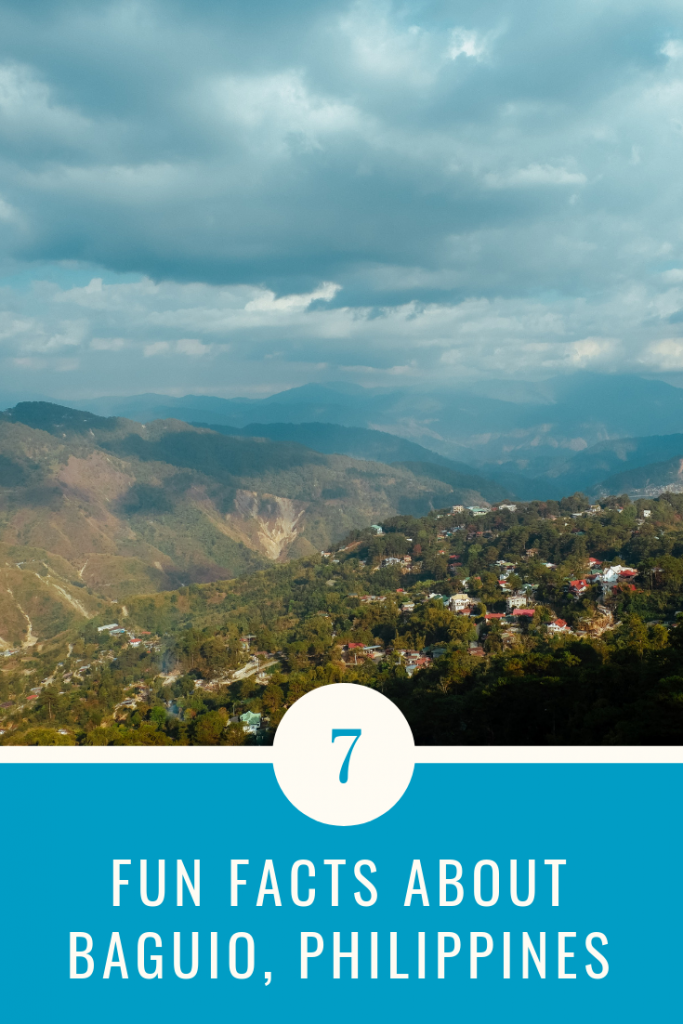 The City of Baguio is located in the mountains of Luzon island: the largest and most populous of over 7,000 islands that make up the Philippines. Perched at 4,810 feet (1,470 meters) above sea level amid tropical pine forests, Baguio City is also known as the City of Pines and Philippine’s summer capital.

Baguio City originated from the Igorot tribe called the Ibaloi

There are different variations of Ibaloi legend. The one I found tells the story of a star-like figure that would descend from the sky. The star was actually a woman with wings dressed in white. Every time she came down to Earth she would damage nearby gabi plants. A man who tended to the plants wondered what was damaging the gabi plants and finally saw that it was a star maiden who was doing it. One day he watched as she took off her wings and clothes and bathed. He stole her wings and clothes so that she couldn’t go back to her home. The maiden felt bad about destroying the gabi plants and he pretended to be angry. He said that in exchange for the damaged plants, he wanted her to be his wife. She agreed and had children with him. One day she found her wings and clothes and returned home. Other variations say that there were multiple star maidens. Their descendants became the people of Ibaloi.

Ibaloi peoples are also known as Nabaloi or Inibaloy. The Ibaloi reside in northern Luzon in the regions of South-Eastern Benguet. Traditionally the people of Baguio engaged in swidden farming, wet-rice agriculture, mining, fishing, and hunting. Ibaloi means, “people who live in houses.”

The Philippines was the prime spot for colonization because of its location. The reasons for its capture was purely for economic and strategic purposes. The Philippines had many natural resources and the islands were so close to China. It was good for business.

The first were the Spaniards. They set up a comandancia (a province under military control) in La Trinidad in Benguet. Thus, they have heavy influences in many different aspects of Filipino life including food, religion and family traditions. Many Filipino foods have Spanish roots (Arroz a la Cubana, Adobo, Menudo, Empanada). Many families have Spanish last names. Many Filipino citizens are Roman Catholic. Filipinos celebrate Quinceaneras and Noche Buena. The Philippine languages have Spanish roots and some words even sound the same like abuso (abuse, insult), abril (April), agosto (August), enero (January), edad (age), keso (cheese) and kama (bed).

After the Spanish-American War, America occupied the Philippines. Baguio City became the Summer Capital of the Philippines. It was where the Philippine Commission had meetings at Session Road. Philippine natives were also Christianized at this time and English became their common language. Filipinos were introduced to canned goods, American fast food, mac & cheese, hotdogs, chips, and hamburgers.

Baguio City was hit by Japan on December 8, 1941. The country was then occupied nineteen days later.

Benguet Coffee is the Best in the Philippines

Benguet coffee was introduced to the Philippines during the Spanish occupation. This coffee is grown in farmlands of Atok, La Trinidad, Itogon, Tuba, Kibungan and Tublay. It unanimously won in the 3rd Philippine Coffee Conference as the best coffee. No chemicals or pesticides are used in the growing of Benguet coffee beans. Benguet coffee beans are meticulously picked off the branches. Only the ripened ones are used. When drying, they are kept elevated from the ground which prevents arsenic from seeping into the beans. The beans are not washed to retain their naturally sweet taste.

La Trinidad is known as the Strawberry Fields of the Philippines

In 1981, the first Strawberry Festival was held. During the 1990s, strawberry sales were the main source of income for La Trinidad citizens. To keep up with strawberry demands and competition, farms utilize Israeli strawberry technology. This technology allows farms to produce strawberries with less spot and gray rot disease. The berries are more dense, sweeter and larger. They are able to produce more at a time as well.

They hold the record for producing the largest fruit shortcake

La Trinidad holds a Strawberry Festival every year. On March 20, 2004 they baked the largest and heaviest strawberry shortcake in the world. It still holds the record in the Guinness Book of World Records: Largest Fruit Shortcake. The cake was produced by a collaboration of bakers and took several days to create. The cake is in the shape of a giant strawberry and sits on a bed of grass made of icing. It ended up being 9.6 kilograms and fed more than 12,000 people.

In the past 3 years, they have recreated a cake but they are not nearly as large.

Rich Ibaloi villagers would mummify loved ones. The process could take up to two years. They used fire, salt, and herbs for mummification. The body is then placed in a pinewood coffin and placed in a cave. The earliest mummies date back to the 11th – 14th centuries. There were about 200 caves in Kabayan and fifteen contained mummies. Due to a series of thefts, the Philippine government has hidden the caves’ locations. The caves are one of the 100 most endangered sites in the world.

Canao is a sacred practice of Baguio

Canao is a pagan holiday and is similar to American Thanksgiving. It is a giant celebration in which natives sacrifice, pigs, chickens, and carabaos. There is a lot of music and dancing involved. Traditionally they offer these animals to ancestors who have passed. Canao can mean different things depending on what it is intended for. Before the 18th century, it was for a good harvest, for economic growth, and for healing. Nowadays a canao is held as a celebration and to bring friends and family together.

Filipinos who have migrated to other countries continue this tradition overseas as a way to connect to their heritage and to feel close to the Philippines. These celebrations are called BIMAAK or BIBAK which stands for the six provinces in Cordillera (Benguet, Ifugao, Mountain Province or Bontoc, Apayao, Abra and Kalinga).

10 Fun Facts About Thailand for Kids