Sukkot is arguably the most fun of all Jewish holidays. It lasts a week, and it’s totally kid-friendly! Here are a few fun facts about Sukkot and some tips for enjoying the celebration. This year, Sukkot begins at sundown on Sunday, October 13. 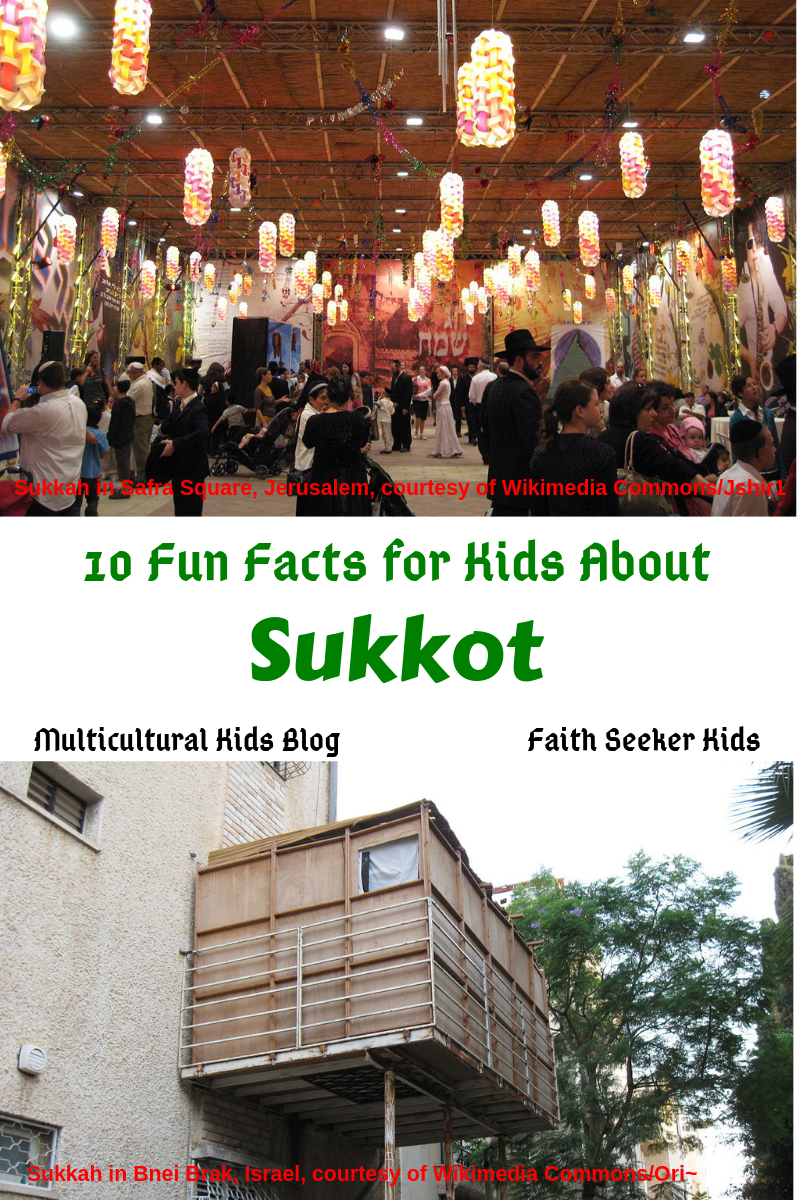 Sukkot (which can be pronounced with the accent on either syllable) is actually the plural form of the singular noun “sukkah” (SOO as in “book”-cuh). Sukkah is most often translated as “booth,” which means the holiday is called “Booths.” Maybe this is why Jews don’t usually greet one another with “Happy Booths!” Try Hag Sameach (HAGH suh-MAY-uch with the “ch” in the back of the throat) instead.

Much of Sukkot is spent in the sukkah/booth, which is a makeshift tent-like structure. There are a fair number of rules governing what it should look like. For example, there should be at least 3 walls measuring at least 28” long and 40” high. The walls should not blow in the wind, and the roof should be made of natural materials with some part open to the sky. But, there’s also a fair amount of leeway beyond the basic guidelines. If you’re not into building a sukkah on your own, you can buy a sukkah kit online. There are even reviews, so you can get the best one for your needs. And if you’re looking for a more technological approach, build your sukkah in Minecraft!

The inside of the sukkah is for decorating! Sometimes, the decorations are really elaborate. And sometimes, hanging vegetation is used. Many booths are adorned with kids’ crafts. Fruit/veggie images printed on cardstock and colored/decorated by kids can easily be hung from the sukkah roof with string/yarn. Paper chains also work really well!

During the week of Sukkot, Jews spend as much time as possible in the sukkah. They eat most of their meals in the sukkah, and they even sleep there. Since synagogues also have sukkot, any meals taken at the synagogue happen in the sukkah, as well. It’s a bit like camping, which will make more sense in a minute.

#5. What’s with the Singing and Dancing?

Sukkot is a joyous holiday in the Jewish tradition and is sometimes referred to as the “Season of our Rejoicing.” What better way to celebrate than with singing and dancing? That’s actually pretty mild compared to ancient times. Back then, Sukkot included lighting large candelabra, playing trumpets and cymbals, ecstatic dancing, rabbinic gymnastics, and priestly juggling!

Sukkot is both. Agriculturally, the holiday marks the gathering of the harvest before the start of the rainy season in the region now known as Israel. This is why decorations often focus on harvest images. Religiously, it commemorates the Biblical story in which the Israelites spent 40 years wandering in the desert after their exodus from the land of Egypt. The sukkah represents the huts they lived in during that time. That’s where the camping things comes in.

This question probably doesn’t even make sense – unless you’re Jewish! One of the main activities during Sukkot is the “waving of the lulav.” The lulav is a little bundle that contains four different items: a closed palm frond, willow branches, myrtle twigs, and a citrus fruit, called an etrog. Jewish communities import these items for Sukkot if they’re located in geographical regions where these items are not grown. The absolute best way to learn about the lulav is this super-funny (and joy-filled) video.

Sukkot is one of three temple holidays in the Jewish tradition. For those holidays, all male Jews were supposed to travel to the temple in Jerusalem. The First Temple was built by King Solomon, so it’s also known as Solomon’s Temple. It was destroyed and then rebuilt in the 6th century BCE. The Second Temple was destroyed in 70CE. So, there is no temple to visit nowadays. Instead, Jews attend synagogue where the establishment of Sukkot by the Lord is read from the Torah. (If you’re a Bible person, it’s in Leviticus 23:39-44.)

Both Temples, by the way, were amazing structures! To learn more, click here for a video walk-through of the Second Temple as it would have appeared in Jesus’ day. It was massive! And if you’re really into it, click here for a 10-minute video that explains all kinds of interesting tidbits and features about the First Temple. It might be a bit boring for your kids, but if you like religious history/architecture, it’s fascinating!

Sukkot also includes a water ritual. And why not — since it marks the beginning of the rainy season? The ritual is officially known as Simchat Beit Hashoavah, which is translated as Rejoicing at the Place of Water Drawing. During Temple times, the priests would fill a golden flask with water each day. Then, they poured this water over the burnt sacrifice along with the wine that was usually poured.  (For more info. on Simchat Beit Hashoavah, more specifically, click here.)

Well, that depends on where you live. If you’re in Israel, Sukkot lasts for seven days. If you live outside Israel (also known as being part of the diaspora), then Sukkot lasts for eight days. This practice probably stemmed from communication issues. Jewish holidays were traditionally based on moon sightings — actual moon sightings by actual people. If you were in the diaspora, it would have taken a while to get word of when the holiday actually started. With two start dates, you could be pretty certain at least one of them was correct! Word spreads much more quickly nowadays, but the custom has now become tradition.

Sukkot is my favorite Jewish holiday. If you’re not up for building a sukkah but want to share a bit of Sukkot with your kids, make a harvest meal using whatever foods are in season in your area. Or, buy some challah (Jewish bread) and dip it in honey for a special Sukkot treat.

Apples and the Jewish High Holidays