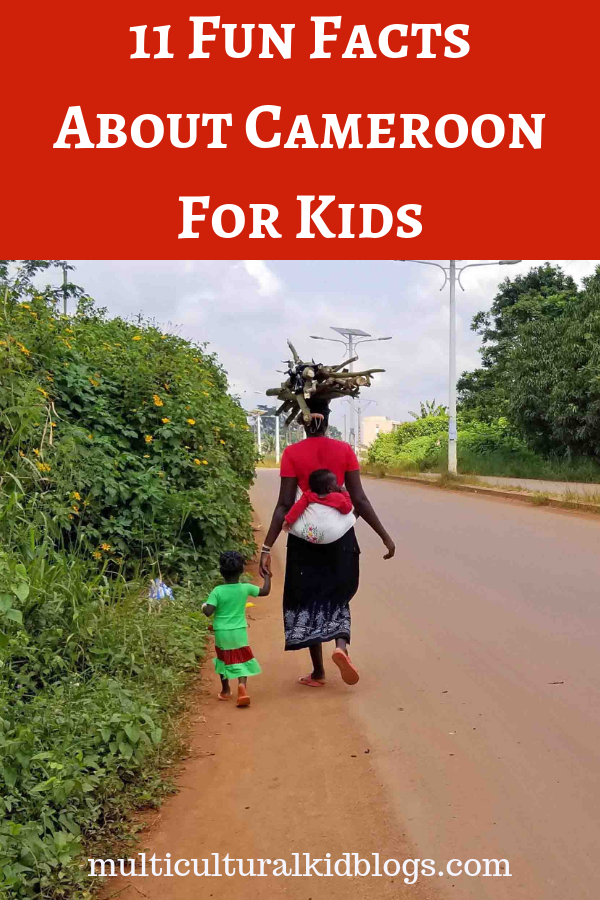 Cameroon is one of the 54 countries on the continent of Africa. It is in Central Africa; however, people often think of it as a West African country due to its position on the map. Cameroon is a diverse country. Its neighbors are Nigeria to the west and north, the Central Africa Republic to the East, Chad to the northeast, and Gabon, Equatorial Guinea, and the Republic of Congo to the south. Cameron also lies along the Atlantic Ocean, the Bight of Biafra, and part of the Gulf of Guinea.

Things to Note About Cameroon:

Crops: Cameroon produces cotton cocoa, coffee, bananas, and oil-seeds. It has some of the most fertile lands in the world.

Climate: Cameroon has different climates throughout the country, with the northern region being a desert plain, mountains in the middle and rain forest in the southern region of the country.

Flag: The flag of Cameroon is green, red and yellow, striped with a yellow star on the red stripe.

Read more below on these fun facts about Cameroon for kids which goes in depth and will give you better insight into this beautiful central African country.

11 Fun Facts About Cameroon For Kids

1. There are about 230 spoken languages spoken in Cameroon including French and English.

The official languages spoken in Cameroon are French and English because Cameroon was colonized by France and Britain. However, there are still up to 230 other languages that are spoken. The languages are divided into seven groups. The largest is the Niger-Congo where 169 languages are spoken. Next is Benue-Congo with 142, and then Bantu language variation with 130 spoken languages. Cameroonian Pidgin English, a form of broken English, is also very common in the Northwest and Southwest Provinces of Cameroon.

2. Cameroon has one of three waterfalls in Africa that empties directly into the ocean.

The Chute de La Lobé, also named the Lobé Waterfalls, is in the beach town of Kribi, and it flows into the sea. These falls are of great significance to the locals and is also a well-known tourist attraction for people visiting.

3. Cameroon is one of the wettest countries on Earth.

There is high rainfall every year here. This makes it among the wettest places on earth. The sixth wettest place on earth is found in Cameroon in an area called Debundscha. The area receives 10,299mm of rainfall. The country has a short dry season as compared to its very long rainy season because it is close to Mount Cameroon and the equator.

Cameroon is often called Africa in miniature, as well as the hinge of Africa due to its geographical location and cultural diversity. You can find every climate and ecological system represented in this country. It is also linguistically diverse and full of culture.

5. Cameroon is the first country in Africa to make it to the quarter-finals of FIFA world cup.

The Cameroonian national team is called the Indomitable Lions. They are one of the greatest African teams in football/soccer. They made it to the quarter-finals of the 1999 FIFA world cup. Here, their star player at the time, Roger Mila, scored two goals during the game. They played against the Colombian national team.

7. Cameroon is home to the highest peak in the sub-Saharan and central Africa.

Mount Cameroon is 14,435 feet (4,040meters) high and extends 14 miles (23km) from the Gulf of Guinea inland. It covers 14 miles inland and forms a boundary between Nigeria and Northern Cameroon. Mount Cameroun is among the largest volcanoes in Africa. It is still active with the last eruption occurring in 2012.

Paul Biya was elected as president of Cameroon in November 1982 and has been the president since then. As of November 2018, the people re-elected him as president where he will remain for another seven years. He changed the terms of the presidency from four years to seven years and wins every election.

9. Cameroon has many rare plants and animals.

The world’s rarest great ape, the Cross-River gorilla, lives in a few of the forests in this country. This ape was unknown to science till the early 20th century. In Cameroon, you’ll have the opportunity to see all the variety of flora and fauna available in tropical Africa. The country is home to over 409 species of mammals and 165 species of birds.

10. There are a lot of thermal springs.

Due to past and current volcanic activities, there are lots of thermal springs throughout the country. The thermal springs are located in Mt Cameroun, Ngaoundere, Lake Moundou, and Manengoumba areas. Locals use these springs as an energy source. This is used for gas which produces up to 21% of the country needs.

11. Waza National Park is popular with both locals and tourists.

This is among the most visited places in the country. The park is located in the northern part of the country. Waza National Park contains over 30 species of mammals like hartebeest, waterbuck, Sudan cheetah, lions, and African bush elephants. The park is also home to 379 species of birds like great white pelican, ostrich, marbled duck, water birds, and more.

How to Teach Your Kids About Cameroon

Although Cameroon is a third world country with a high poverty rate, it is a great country overall. I have hope that as the years go by it will continue to develop for the best.

14 Fun Facts About Nigeria for Kids

Freelance Travel Writer
Karen is a mom, wife, and writer at TheMomTrotter.com where she inspires and encourages families to travel the world. She is also the founder of BlackKidsDoTravel.com, which is an organization created to bring about diversity in travel and bridge the gap. On her blog, she writes about her mission to raise global citizens as well homeschooling, worldschooling, and budget travel.