Rwanda is hailed as one of the cleanest nations in East Africa with plastic bag bans and conservation buffer zones.

Learn more about Rwanda with these 10 fun facts. 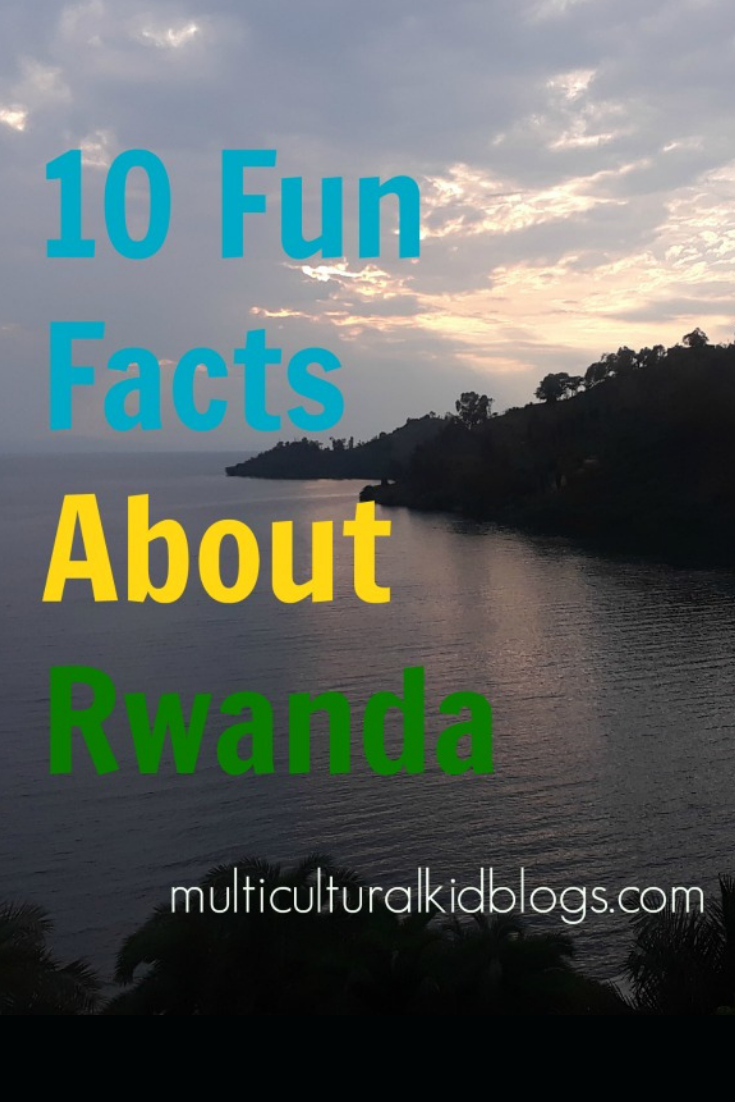 I recently spent two weeks in Rwanda, an absolutely beautiful country. Many of us know Rwanda from the film Hotel Rwanda (not for kids, folks!) and the genocide that took place there 24 years ago.

Others know of it because of Dian Fossey’s work there with gorillas and the film Gorillas in the Mist. While gorillas remain a major attraction for tourists visiting Rwanda, there is so much more to this small African nation full of wonderful people. Rwanda is full of impressive art, delicious fish, a lovely lake, and more.

1. Rwanda is known as the “Land of a Thousand Hills”

Rwanda, a landlocked nation, shares borders with Uganda, Tanzania, Burundi and the Democratic Republic of the Congo. Its capital city, Kigali, is just 1,107 km or 694 miles from the equator. It truly is the “Land of a Thousand Hills” with mountains and hills everywhere and towns and cities located at substantial elevations. 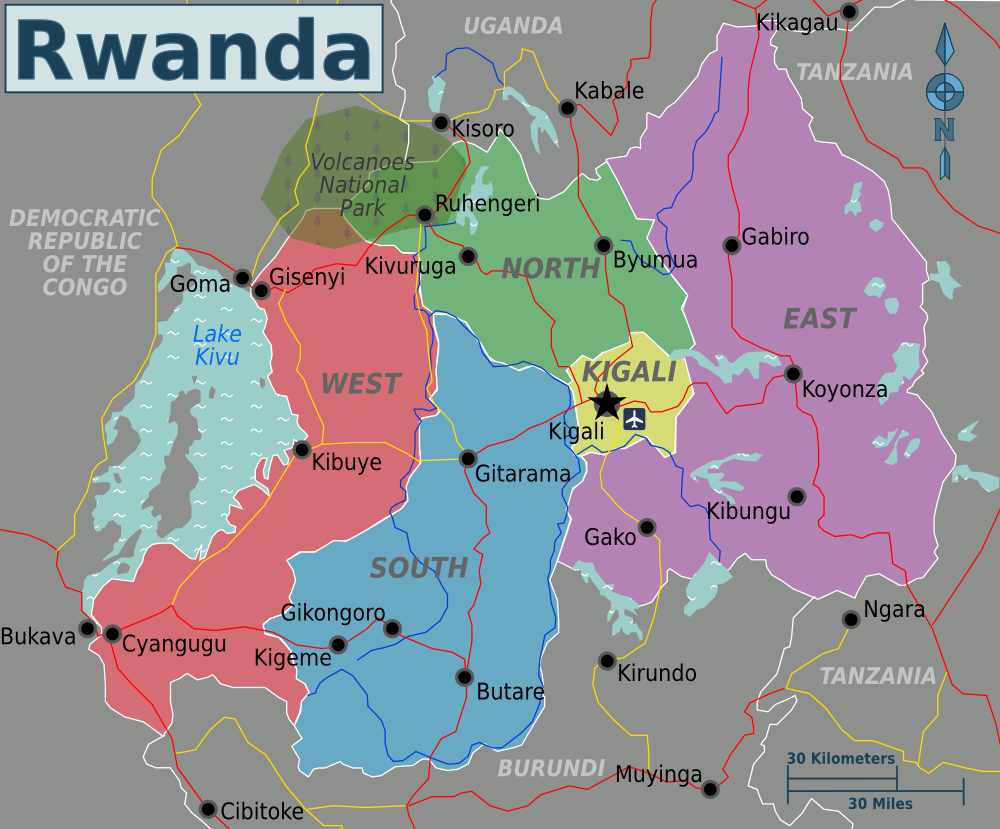 2. The official language of Rwanda is Kinyarwanda.

Many Rwandans also speak English, which students learn in schools. Some still speak French. Prior to 1994, Rwanda was a Francophone nation, with children learning French in schools, but the government made the switch from English to French following the genocide. Its effort to teach English in schools widened in 2009.

3. Rwanda is a major producer of coffee and tea.

The coffee I drank while I was there is some of the best I’ve ever tasted. A food staple is fish, particularly Tilapia and Simbaza. People often prepare it fried. Both fish are from Lake Kivu, a large lake separating parts of Rwanda and the Democratic Republic of the Congo. Simbaza was a favorite of mine while in Rwanda.

Cassava is another staple food item, similar to spinach or collard greens. People in the United States know cassava as the tapioca plant which is the main ingredient in tapioca pudding. Leaves must be cooked to be eaten. Otherwise, they are poisonous.

The traditional dish pictured below is one I ate while in Rwanda. The main ingredient in the white item is cornmeal. It is a bread-like dish that people use to scoop up the cassava leaves.

Other popular food items are samosas, brochette (skewered meat similar to kebabs), and chapatti — a traditional Kenyan fried bread that is thin and round. Local raise goats throughout the country and some restaurants are beginning to serve fresh-made ricotta from goat’s milk which is delicious. 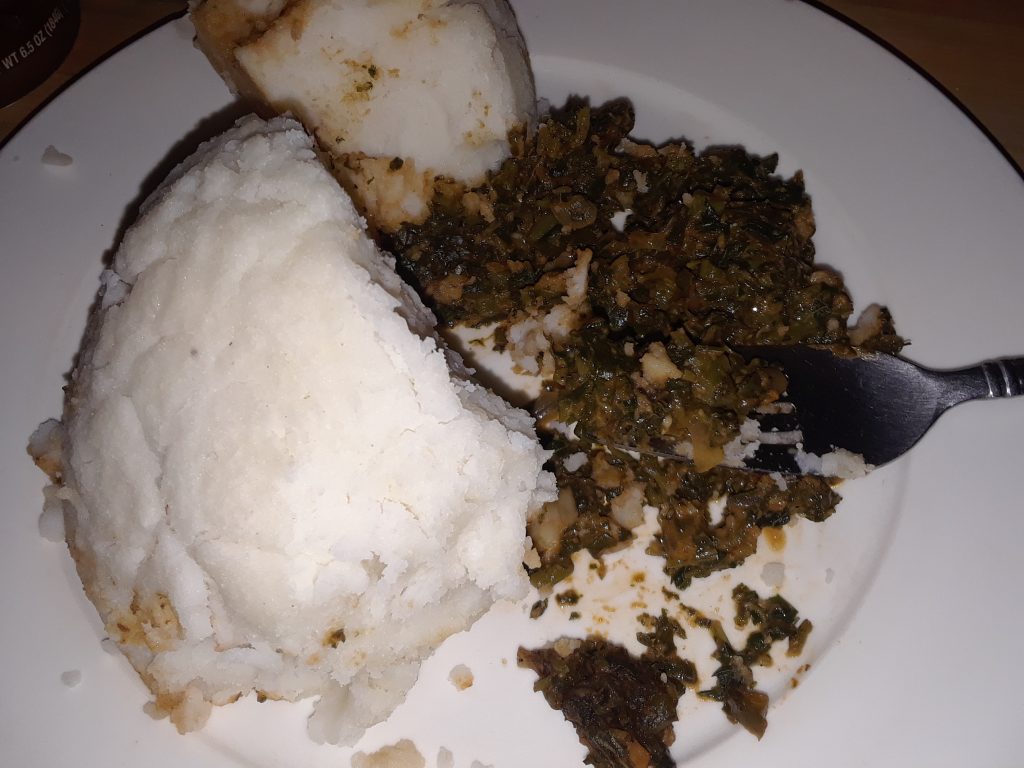 Like Kivu is dotted with islands, many of which have unique inhabitants and stories. I visited an island that appropraitely called Bat Island because it is home to thousands of fruit bats (and a few cows). 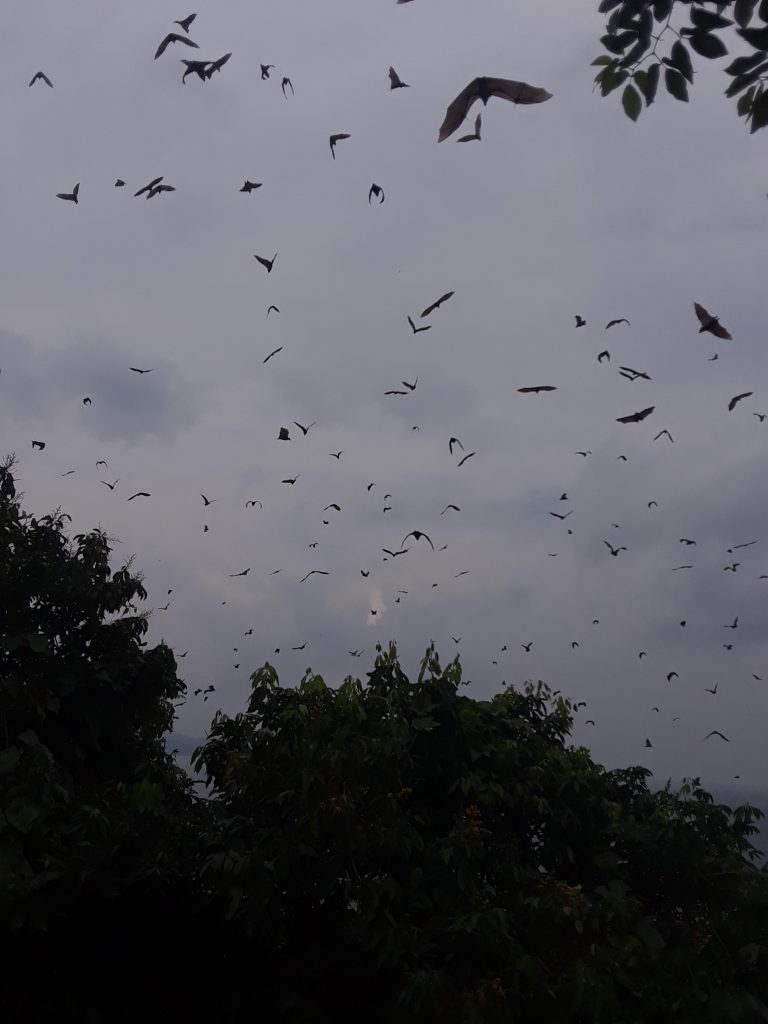 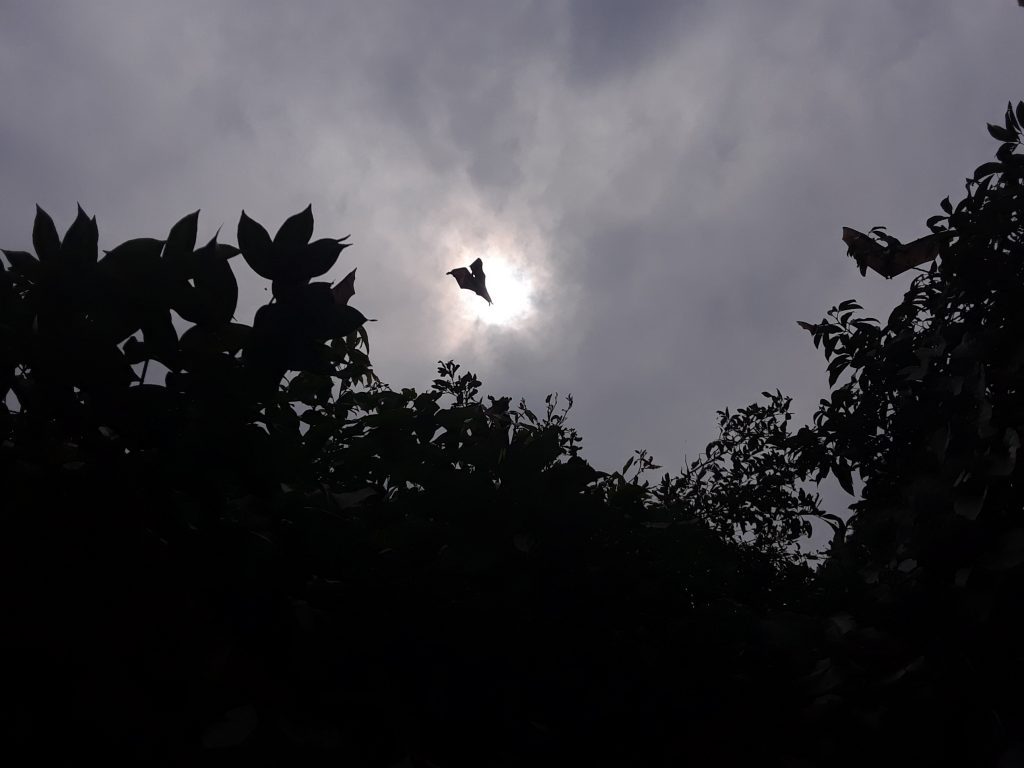 5. Rwanda is a birdwatcher’s paradise.

Of the 23 bird species in the world, Rwanda is home to seven of them (including many rare species).  The Nyungwe Forest, in particular, is famous for its diverse beauty and number of birds. The Gold Crested Crane (below) is the national bird. People can see it at Akagera National Park. Akagera is also home to the elusive Shoebill. 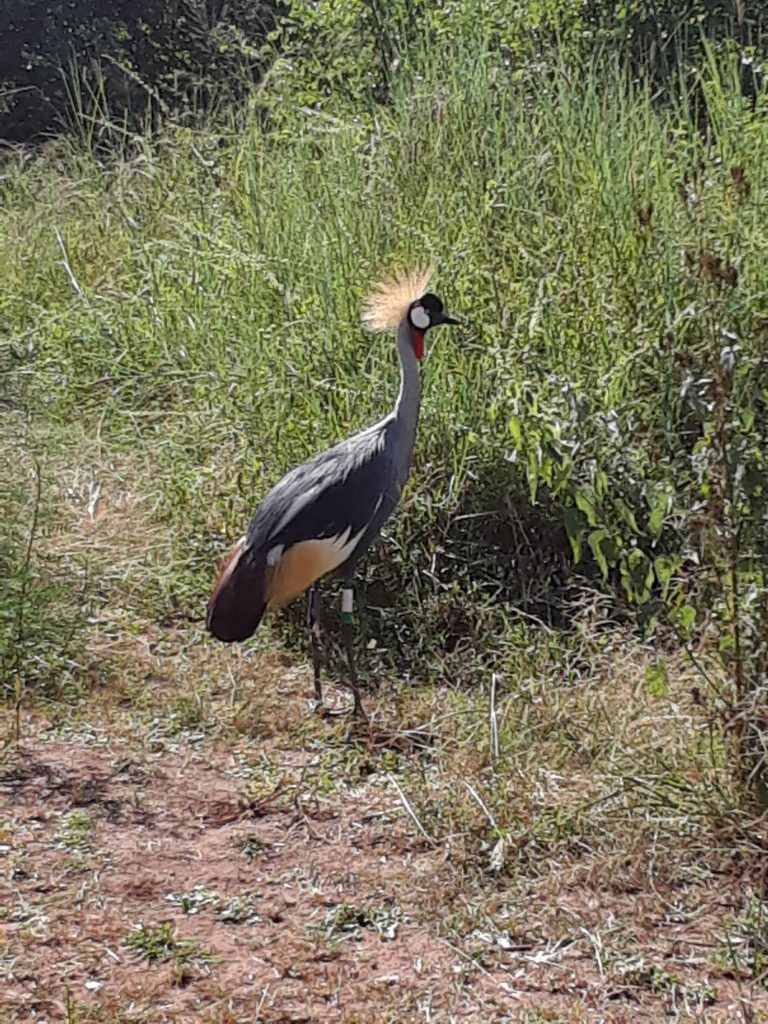 Dian Fossey made Rwanda famous with her studies of the gorillas living there. The Rwandan government recently raised the permit fees for gorilla trekking in Volcano National Park. The cost is now $1,500 per day, which might seem quite high to many, but the increased rate is part of an effort to reduce the human footprint on the gorilla’s habitat and to improve conversation efforts.

Recently, the Ellen Degeneres Wildlife Fund was established to continue the important conservation work of Dian Fossey. Ellen and her wife Portia de Rossi visited Rwanda in 2018 to begin the fund which includes a permanent home for the Dian Fossey Gorilla Fund.

In Kigali, the capital of Rwanda, there are various car-free zones where pedestrians and cyclists can roam freely. Rwanda also implements a car-free day each month in which the government encourages residents to exercise and focus on healthy living.

While cars are popular in Rwanda, many people travel on foot, bicycles, moto-taxis, and mopeds on which individuals ride on the back of to get around.

Most moto-taxi drivers carry an additional helmet with them, and this is by far the most affordable way to get around in Kigali if your destination is too far for walking.

7. The last Saturday of every month is dedicated to community service.

Umuganda is the Kinyarwanda word for “community work.” It also means “coming together in common purpose to achieve an outcome.”

Initially begun after Rwandan independence in 1962, the practice was reinstated in 1998 as one of many efforts to rebuild the nation following the 1994 genocide. It takes place on the last Saturday of each month and lasts for typically three hours.

Everyone is expected to contribute during that day in whatever way they can, perhaps cleaning up a local space, assisting a neighbor with a gardening need, repairing public facilities, building schools and more. Many estimate that the practice has been instrumental to the country’s development, particularly over the last decade.

8. No plastic bags are allowed.

Tourists cannot bring plastic bags into the country, and stores do not give any out. Instead, people use paper bags or biodegradable bags made from cassava leaves or banana leaves. Many of the places I stayed reflected the nation’s commitment to reusable items.

9. Honey and conservation are huge in Rwanda.

One of the best things I tasted while in Rwanda was its delicious honey. The area surrounding Akagera National Park is the main source of the nation’s honey. A buffer zone around the park was created to discourage poaching.

Bees and honey farms were set up to replace the income previously earned through poaching. It seems to be an effective way to encourage conservation and to protect the many species inside Akagera while also supporting a sustainable livelihood for individuals in neighboring communities. I ate some delicious ice cream topped with honey at Inzozi Nziza, a cooperative ice cream and coffee shop located in Butare, Rwanda. Inzozi Nziza is the subject of the documentary Sweet Dreams. 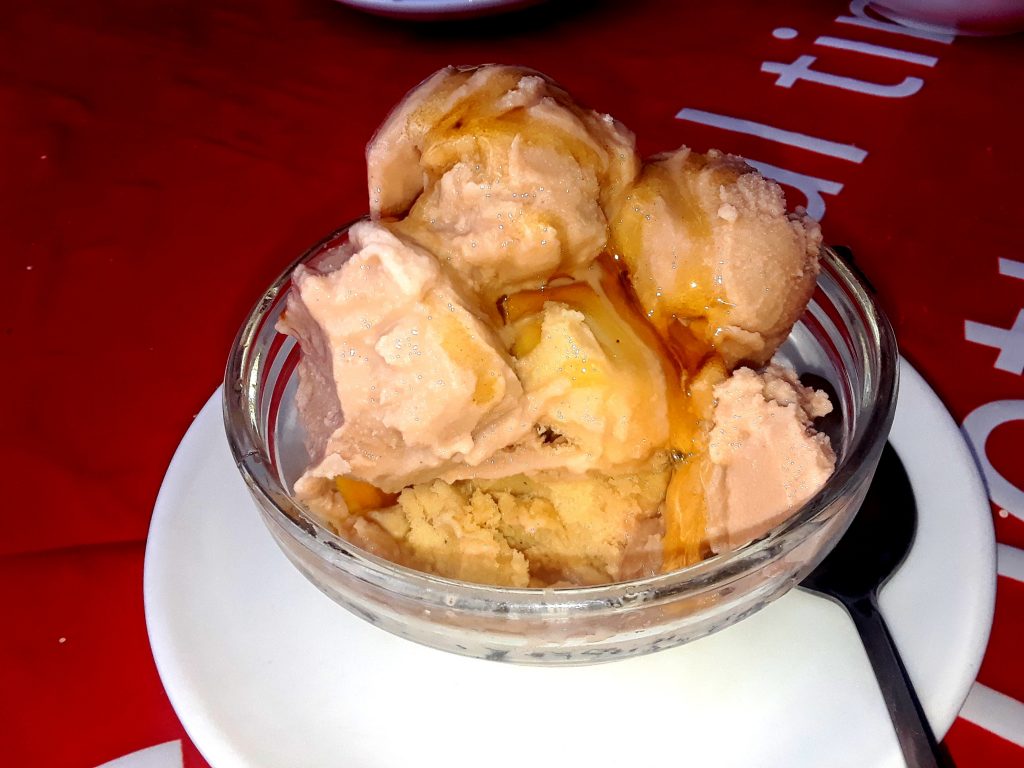 10. Local art is on display everywhere.

One of my favorite things about Rwanda was that many of the hotels double as galleries for local artists.

These places often fill their hallways, walls and common areas with paintings made by local artists, which are also for sale. Funds support the artists and programs for local street children to receive services, education, etc. I love this idea!

Have you been to Rwanda? Have you visited another African nation? If so, please share! I’d love to hear all about it. Or, if your travels have taken you to another part of the world that I should check out (I love traveling), I’d love to hear about that, too.

Photo credits: Map image via Wikimedia Commons; all others by the author Jennifer Fischer.