What do you know about Costa Rica – one of the happiest countries on Earth? These 10 fun facts about Costa Rica will make you want to learn even more about the most pura vida country on the planet! 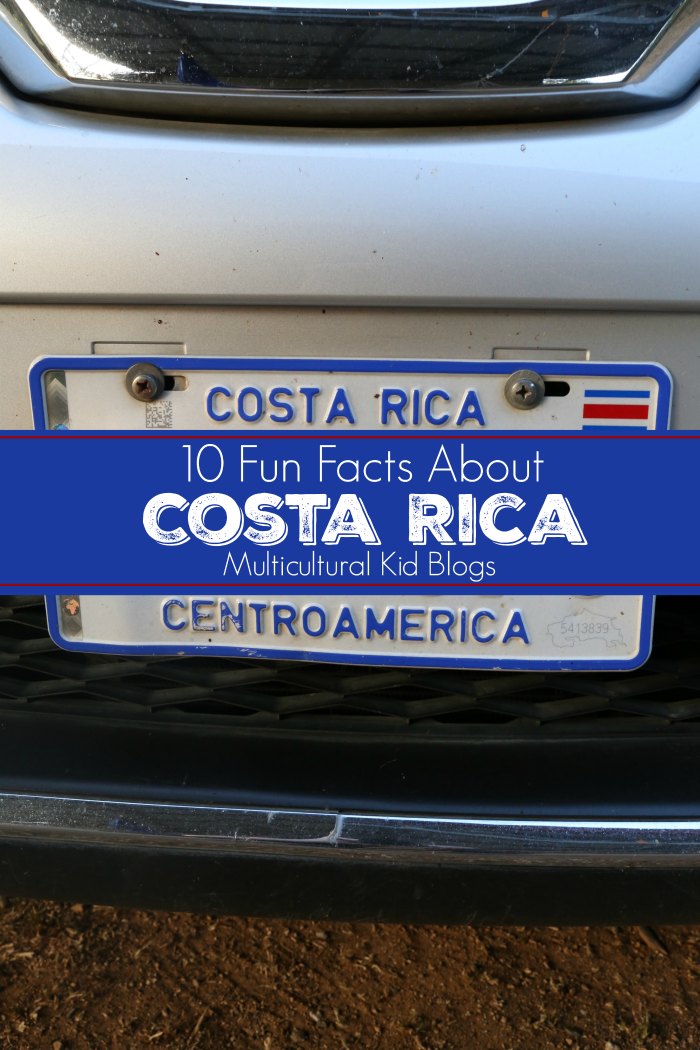 Costa Rica is one of the most amazing countries on Earth –  but of course I am biased! After spending eight years studying Spanish, working as a bilingual teacher and then as a tour guide in one of the happiest countries on Earth, I married a Costa Rican man.  Now my life is constantly pura vida– and I want to extend the Costa Rica pura vida philosophy of life to Multicultural Kid Blogs readers with 10 fun facts about Costa Rica.

Who Are Costa Ricans?

1. We call ourselves ticos and ticas. This is because when we speak in Spanish, we tend to add the diminutive “-ico” or “-ica” to the end of words. So- something is not chiquito (small) it is chiquitico (really small- Costa Rican style.) For some fun, follow the #YoSoyTico and #YoSoyTica (which translates to I am tico or tica) hashtags on social media to get a feel for the daily life of many Costa Ricans.

2. Costa Rican food is not spicy. At all. In fact, many Costa Ricans consider a spicy pepper to be simple black pepper! There are many national dishes, but gallo pinto is the most well known. A mix of black beans, white rice, and Salsa Lizano, it’s eaten any time of the day or night. There is an eternal battle between Costa Ricans and Nicaraguans about who invented the gallo pinto, so be forewarned. The only thing I like as much as looking at foodie photos from Costa Rica is preparing Costa Rican food at home, like traditional chicken and rice. 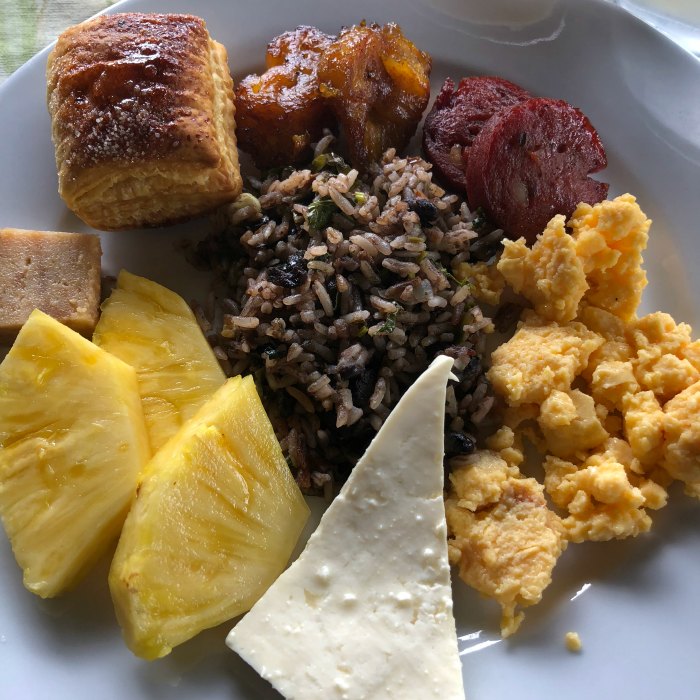 Where Is Costa Rica Located?

3. Costa Rica is located in Central America – between Nicaragua and Panama. The country is small, just about 51,000 kilometers total (which is roughly 18,000 square miles). Don’t expect to drive from one end to the other in a day though. Roads and traffic are notoriously bad – and driving from border to border can take well over 15 hours.

4. Costa Rica is a small country. The total population is just about 5 million and that includes those living abroad. Because of Costa Rica’s relative political and economic stability, there are large numbers of immigrants arriving via land and sea every year. Most of the population is concentrated in the Central Valley, in the cities of San José, Cartago, Heredia, and Alajuela. 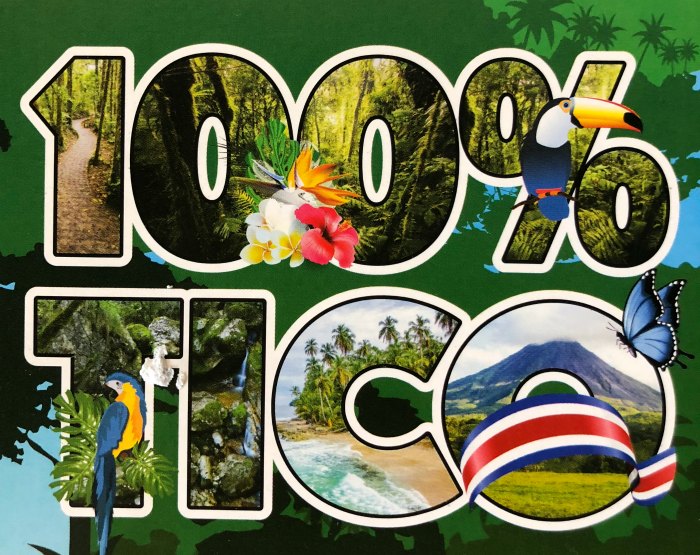 5. Part of Costa Rica’s national anthem is “vive siempre el trabajo y la paz” which means long live work and peace. Costa Ricans take peace very seriously- they are a completely demilitarized country with no army. In fact, we take neutrality so seriously that we will be one of the first carbon neutral countries in the world as well! We are a democratic society with a 4-year election cycle. We recently elected a new president and the first black female vice president in all of Latin America -Epsy Campbell Barr.

6. Costa Rica is home to some of the most amazing biodiversity in the entire world. While making up only 0.03% of the Earth’s surface, it houses about 6% of the world’s biodiversity. Some of my favorite places to visit are the national parks, including Monteverde, Volcán Arenal, and Caño Island. Our family just had an amazing time at Rancho Margot, a sustainable farm between the Arenal Volcano and Monteverde that is the perfect introduction to Costa Rican nature, food, and culture. There are also tons of great family beaches, as well as amazing restaurants throughout the country!

The Happiest Country On Earth

7. Costa Ricans are a very happy bunch! Ranked consistently one of the happiest places on Earth,  this year we ARE the happiest place on Earth according to the Happy Planet Index.  We love to celebrate our soccer team, which made it for the first time ever to the World Cup quarterfinals in 2014, and is currently playing in the World Cup in Russia. We also love to drink beer. Imperial and Pilsen are our top choices, although a booming microbrew culture has sprung up recently throughout the country. And we love to dance! We have our own version of the cumbia, both the music and the dance!

8. Education is free in Costa Rica – and we have a great system. Even through college, la Universidad de Costa Rica has nearly free tuition and a large number of scholarships for students who pass the entrance exam and pursue a four-year degree. Spanish is the national language in Costa Rica and the most widely spoken. With the rapid spread of multinational employers such as Amazon, HP, and Intel in Costa Rica, however, you will find many people who speak English as well as a myriad of bilingual public and private schools.

9. Costa Rica’s main industry is ecotourism- and we have a very well developed national tourism board that regulates sustainable and eco-friendly tourism. Coupled with the large number of people that speak English and the relative safety of Costa Rica, we are the perfect place to visit the beach, the rainforest, or the many volcanoes. Plus, drinking water in Costa Rica is potable across the country, so it’s a great destination for families with young children. We love people who are learning Spanish too!

10. Costa Ricans have a very distinct Spanish accent and tons of words that are only Costa Rican. Costa Ricans have a distinct “r” sound in Spanish, and love to say that things are pura vida. We also use a more formal conjugation for the singular you- usted, rather than the traditional tu. Once we get to know you, we may use “vos” (also commonly used in El Salvador, Guatemala, Honduras and Argentina) but we generally do not use tu. Some favorite slang words include “mae” (dude), “choza” (house) “mejenga” (pick up soccer game) and many other fun words you can find here.

If you ever have had the chance to visit us, then you know how important our pura vida lifestyle is to us. Our favorite thing is when people fall as in love with Costa Rica as we are. These 10 fun facts about Costa Rica should pique your interest in our amazing country and if you want to learn more, definitely come visit us!