Where are you from? is part of common questions people use when they first meet each other. Yet, many see it as offensive or even simply too difficult to answer.

Cross-cultural children, in particular, struggle with that question. Children who have lived or live a globally-mobile life or have parents from different origins/ethnicity will struggle too.

Here, I propose 10 simple alternatives to this awkward question. 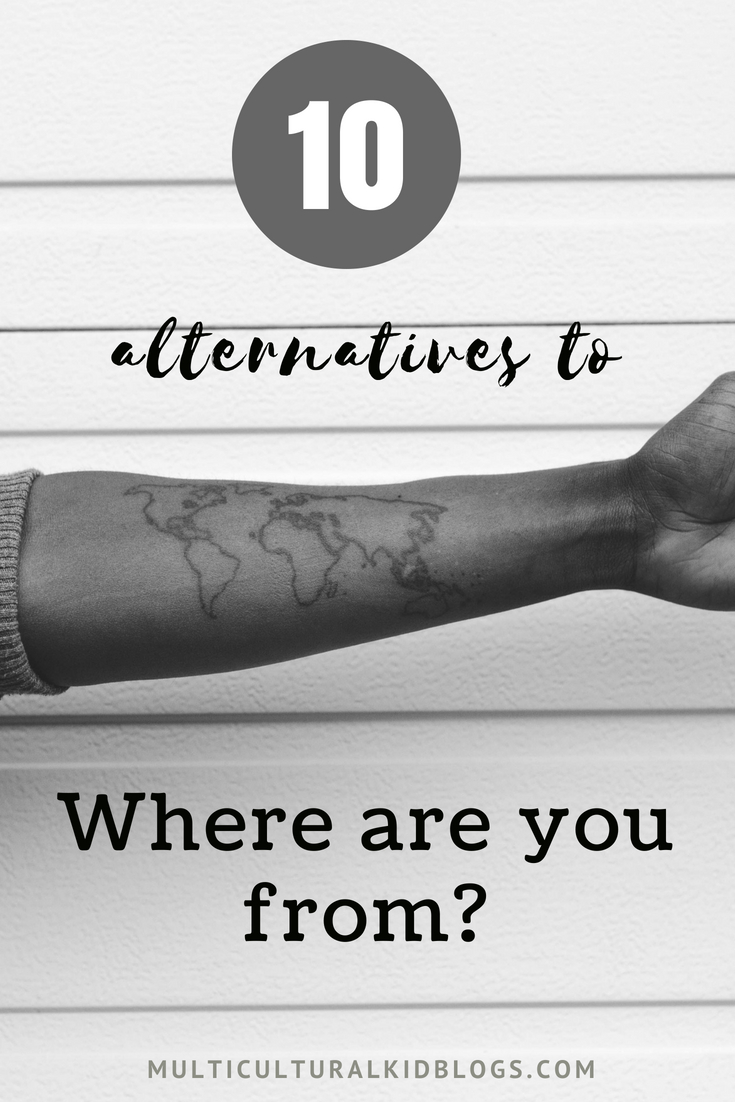 Why this is a difficult question

A couple of years ago, my girl, on her first day at school, was waiting in line to have her photograph taken. She was attending an international school, one where there are many children from different ethnic backgrounds and where most children have at least one parent who comes from a different country. The well-meaning German photographer was asking all of the children “Where are you from?” as an ice-breaker. While hearing this question again and again, my daughter, then 6, started to panic. She has a French mum, a Portuguese dad, was born in the UK but lives in Germany. She whispered to me: “I don’t know what to say.”

I had a few seconds to reassure her she could say anything she wanted. Nobody would be offended, and there was no right or wrong answer. We had never really discussed this question. We were taken by surprise. Needless to say, she now has a few possible well-rehearsed answers ready (my favourite one being: I am European).

When is it okay to ask that question?

My naive self thought this question was common in daily life but surely would not be so common in international/expat circles.

When I attended the FIGT conference last March, I was astonished by the number of people who were asking each other “Where are you from”? FIGT (Families in Global Transition) is a forum for globally mobile individuals, families and those who work with them.

People from all corners of the world attend, and most of those people have a very complicated history or one that does not fit a one-word reply to that question. Most attendees have moved around many times and do not live in their passport country. Maybe in those circles, we expect and will tolerate a small monologue as the answer, and that makes it okay to ask. Yet to me, there might be better ways to find out about someone’s story.

Changing how we inquire about new people will make them see themselves in a new light. They could tell you more than a passport.

10 Alternatives to “Where are you from?”

1. Where is home right now?

“I am home. For now,” said Sean Ghazi (an adult third culture kid, Malaysian actor, singer and dancer) when someone asked him if he was home for good. Asking an expat or cross-cultural child where their home is will likely result in as much confusion as asking where they are from.

Home may very much be a work in progress for them. They may have just moved. Their parents may well define home differently from them. Adding the “right now” will give them a simple one-word answer possibility that will not force them into a longer story if they do not want to. Similarly, adults may choose to tell you where their belongings are right at this moment but can elaborate on their story.

Elizabeth Liang, an actress raised in 6 different countries as a Guatemalan-American of Chinese-Spanish-Irish-French-German-English descent says: “I am not from a place. I’m from people.” In her amazingly moving play Alien Citizen, she explains how home became the man she fell in love with when she met him. Many cross-cultural kids and expats will define home, not as place, but as people or feelings. Home is where the heart is after all.

This sounds a little like a tricky interview question. Yet, it just opens the discussion for anything and everything. If you feel your interlocutor is up to it, I am sure it would lead to amazing discoveries and authentic stories. Children would most likely answer with their name first. That in itself is a lovely conversation opener and may tell you a little about their origins.

I, personally, like that one. It implies the person asking the question wants to hear the little monologue they are about to give you. It implies you are interested in them beyond just the passport. The story might be fun, sad, long or short but it is always interesting, unique and worth listening to.

5. Where have you lived? Where did you grow up?

Ask someone what it is/was like to grow up in Germany, where are the places they hung out, what countries they have lived in since adulthood. “Knowing whether someone grew up a forest child or a city kid will tell you a lot about them. And it gives context. Growing up Indian in Ann Arbor is different than growing up Indian in Abu Dhabi. In understanding a person, where they grew up means a lot more than where their ancestors did,” says Gaurav Kulkarni, an Indian-American. Most people will also love telling you stories about their childhood and the places that meant a lot to them then.

This is a really simple one for children to answer. The reply is simple and only requires one word. They are likely to know it from a young age. It may also spark a little story. My girl likes to add that she moved away from her birth country, the U.K. when she was a 1 -year-old. She likes to say she went to nursery there. She knows lots of little stories we have told her about that time. So this is a fun simple question to get children engaged.

7. What brings you here?

In a professional setting where you meet a lot of new people, this would be a great question to ask. You would hear about the other person’s reasons for being here which would almost automatically include a little bit about themselves, their interests or their life.

Simple question. Simple answer. This one is sure to raise a little laugh too. Of course, expats may pay taxes in more than one country. Be prepared for a not so simple answer but a detailed one.

9. Which place gets deep inside you or where do you spend most of your time?

This is one Pico Iyer, a British-born American essayist and novelist of Indian descent, uses as an alternative to the “Where is home?” question. I feel it suits the “Where are you from?” question. The answers may not yield anything to do with their origins but it will tell you a lot more about the person telling you their story.

One of my all-time favourite TED talk is about this question. Taiye Selasi, a British-American writer and photographer of Nigerian and Ghanaian origin, explains how the places that shape our experiences are where we are from. She is not from the United States. Instead, she is from Lawrenceville where she spends Thanksgiving. She claims our experiences are defined by rituals, relationships, and restrictions. These are the things that tell you where someone is from. I highly recommend watching this talk. It is very inspiring and a must-see for anyone who is or working with cross-cultural children and adults. This is, most likely, better suited to teens and adults as young children may struggle to understand the concept of local. You could phrase the question differently: where are your special places in the world?

Some of these alternatives to “Where are you from?” will not suit every situation. Use them as guides to get the conversation going. We share our stories to meet friends. Make sure your story-asking questions are full of wonder. 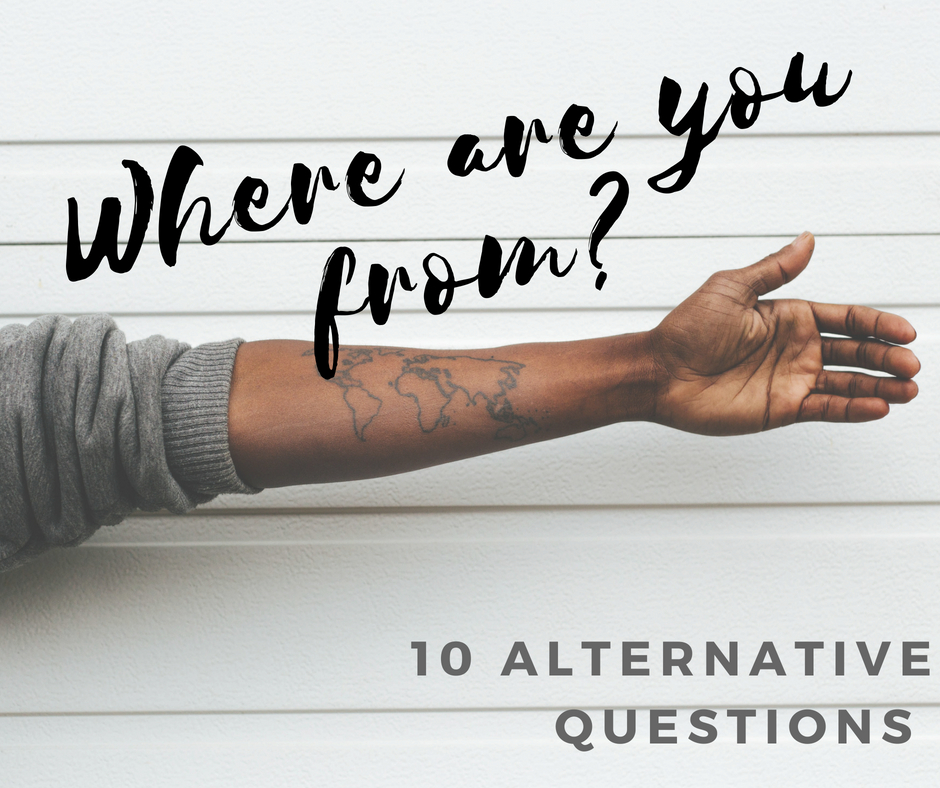 Raising a Third Culture Kid in a Mixed Family

Becoming a Third Culture Kid: Letter to My Multicultural Daughter