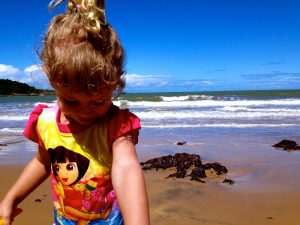 Dear Daughter (Read this only when we move from Brazil to the United States!),

I’m sure you’re busy unpacking your room and familiarizing yourself with the menu at Starbucks and layout of Target. Good thinking because we’ll be going to both places A LOT!

If you could give me a few minutes, there are some things I’d like to tell you.

First, I want to apologize. Your parents have brought you to a place where you won’t get called Goldilocks or Cinderella on a regular basis. No one here in the US is going to come to a dead halt on the sidewalk and dote over your blue eyes. Sorry about that. Your traits just aren’t that special here.

In fact, you are exactly what everyone still imagines a “real” American looks like. Congratulations, you’re mainstream! How does it feel?

You’ve never lived in the U.S., so I’ll spell it out. With your white skin, blue eyes, blonde hair, and accent you can slip right into mainstream America and nobody will be the wiser. The truth is, dropping your Brazilian side and going exclusively white-American could make some things easier.

Like the US census. You won’t have to figure out how to report being a white-Brazilian on a document where “‘Hispanic,’ ‘Latino,’ and ‘Spanish’ are used interchangeably”.  You were born in the largest country in Latin America, but you don’t speak Spanish.  You could learn Spanish, but it would certainly be easier to only check “white”, non-Hispanic, and be done with it. 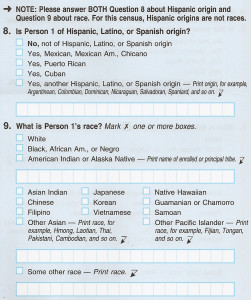 It’s not just the government that equates Latino with Hispanic.  Odds are neither the WASP from Maine nor the Honduran-American in Texas is likely to see you as Latino. Maybe your school counselor will send you to the Latino Student Association, but you’ll probably have to ask them to translate their bylaws into Portuguese. And are you going to sit through meetings conducted in Spanish? Ask them to switch to English? It would be less complicated to just give up on being Latino and join the drama club.

By being only white-American, you’ll avoid awkward conversations explaining that Brazilians don’t speak Spanish or eat tortillas. You won’t have to continually talk about the Amazon rainforest, and you could absolve yourself of all responsibility for correcting people who think Rio de Janeiro is the capital.

In fact, if you don’t ever speak Portuguese in public, WASP Americans will embrace you completely as one of their own. This means you’ll probably have to listen to some complaints about all the immigrants destroying America, but if you’ve given up on the whole Latino identity anyway, you can get in some jokes of your own. Just don’t joke specifically about Argentina or Uruguay, or you’ll give yourself away. Those countries are way too far away for mainstream Americans to know about.

The simple truth, rightly or wrongly, is that your physical appearance and your accent when speaking English make it easy for you to slip on the mantle of “typical” American. Pretty much everyone is going to assume that’s what you are anyway.

Even if it makes some things easier, some people more comfortable, some situations less awkward, don’t be typical. You are more than typical.

You are American and Brazilian.  You are a native English speaker and a native Portuguese speaker.  You eat peanut butter and jelly sandwiches and pão de queijo.  You can sit quietly by yourself reading and can happily embrace all 100 guests at your birthday party.  You grew up reading Dr. Seuss and Monteiro Lobato.  You have an American’s optimism and a Brazilian’s sense of loyalty.

You are Brazilian and American and a bridge between them.  You are more adaptable, creative, and tolerant than most people.  You’ve been boarding planes and carrying a passport since you were five months old.  You can translate between Fahrenheit and Celsius and read a map in kilometers and miles.  These are life skills you can take to the bank.

You come from French, Italian, German, English, Portuguese, Welsh, and native Brazilian peoples.  You have an uncle who cheers for Flamengo in Rio de Janeiro and an uncle who cheers for the Falcons in Atlanta.  You have a grandfather who grew up in rural South Dakota and a grandmother who grew up in rural Ceará.  As kids, your dad picked out costumes for Carnaval and your mom picked out costumes for Halloween. 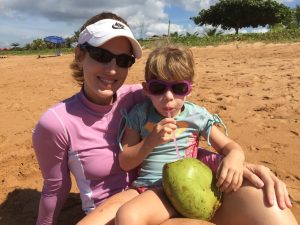 This is all to say that in your case, one plus one doesn’t equal two.  You are American.  You are Brazilian.  And you are a blend that is unique.  For you, one plus one equals three.  Don’t try to fit in by being less.  Don’t let others assume that you are less.

Be all that you are.  Always.

Brynn is a writer living in Vitoria, Brazil with her Brazilian husband and multicultural, bilingual daughter. She blogs about her experiences as an American in Brazil and living in a multicultural family at http://www.brynninbrazil.com. You can also follow her on twitter @bbarineau.

Latest posts by Brynn (see all)