Γεια σας! Hello! Welcome to Greece – the southernmost country in Europe. It is divided into the mainland, the peninsula south of the mainland called the Peloponnese, and the thousands of islands in the seas around it.

Greece is one of the oldest countries in Europe, with a history going back thousands of years. Ancient Greek culture influenced Western civilization in many areas including architecture, the arts, government, language, literature, philosophy, and much more. Let’s take a look at 10 fun facts about Greece. 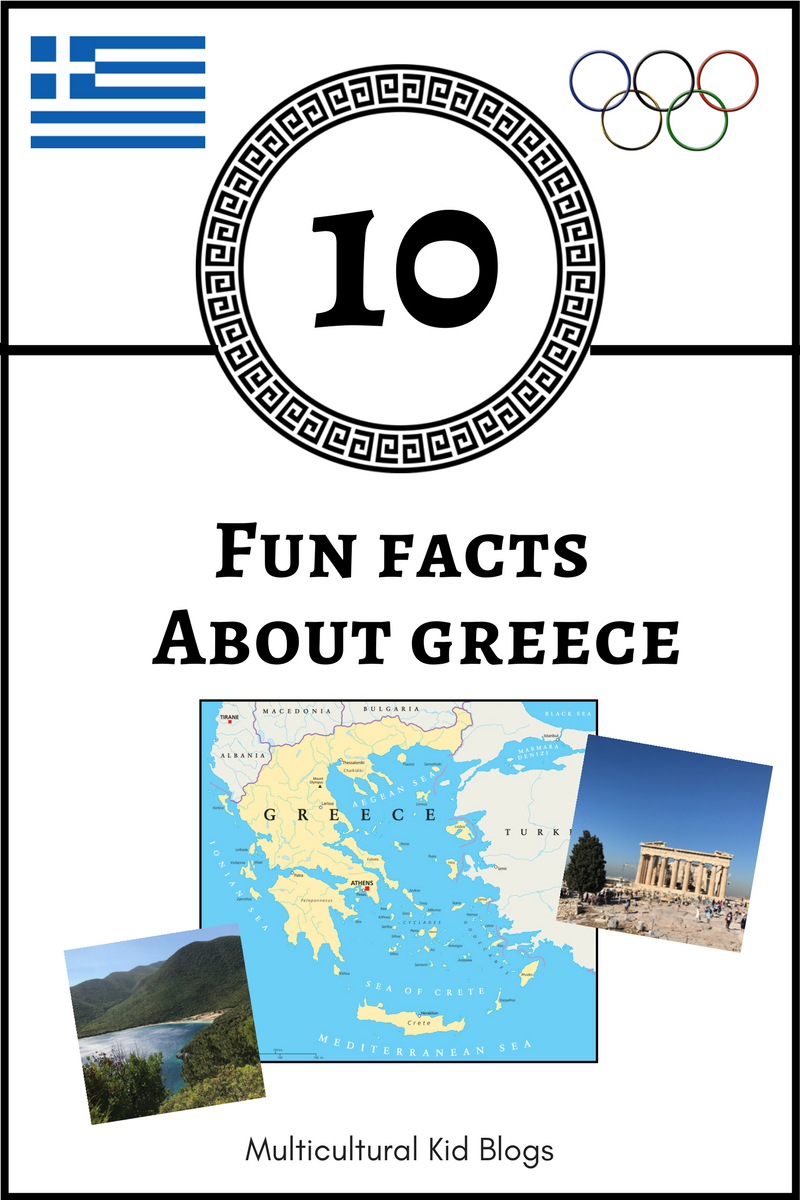 1. The Acropolis of Athens was a runner-up for the New Seven Wonders of the World.

Acropolis means “high city” in Greek.  There are many throughout Greece, but the most famous one is the Acropolis of Athens. Situated high above Athens and surrounded by stone walls, the fortress protected the ancient city from attacks. Important buildings were constructed as a monument to the greatness of Athens. The Parthenon was built as a temple to Athena, the goddess of wisdom and war and for whom the city of Athens was named. Other important buildings included the Temple of Athena Nike and Erechtheion, a temple dedicated to both Athena and Poseidon.

The Parthenon and most of the other buildings were destroyed over time by earthquakes and different occupying forces, including the Persian and Ottoman Empires. Major restoration continues to date, and many historical objects are being moved to the new Acropolis Museum that opened in 2007 to prevent further damage from pollution. The Acropolis of Athens was named a UNESCO World Heritage site in 1987.

2. The Greek alphabet was the first to use vowels.

The Greek alphabet is over 2,500 years old. There are 24 letters, seven of which are vowels. The word “alphabet” comes from the first two letters alpha and beta.

Many English words come from Greek words, especially ones beginning with ph (photograph, philosophy). For example, philos means love and sophia means wisdom, so philosophy means love of wisdom. Hippo means horse and potamos means river, so hippopotamus means river horse. Many Greek letters are used in science and math. For example, the delta is used to represent a difference or change in quantity. 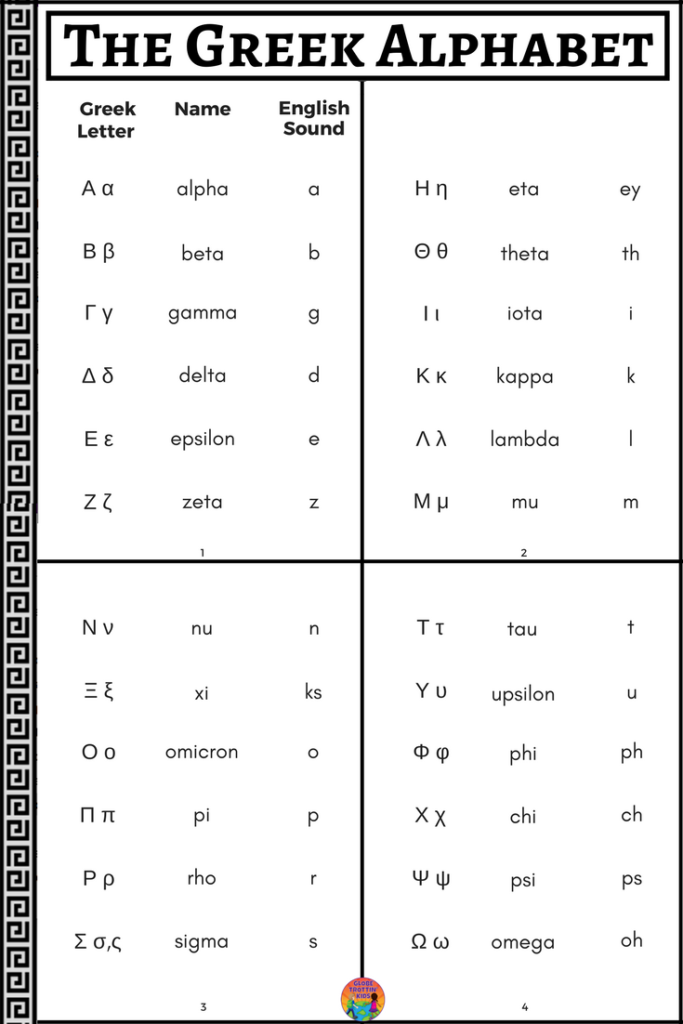 The first Olympic Games were held in 776 BC in Olympia near Greece’s southwest coast. They were held every four years and lasted five days. The Olympic Games were in honor of Zeus – god of the sky and leader of the Greek gods. Events included running, wrestling, chariot races, boxing, horse races, and the pentathlon. Winners were presented with crowns of olive made from the branches of the sacred olive tree.

Women were not allowed to compete in the Olympics. A separate festival for women, called the Heraia, was held every four years in honor of the goddess Hera, the wife of Zeus. Girls of different ages competed in running events.

The ancient Olympics ended in 393 AD when the Roman emperor banned them. The modern Olympics began in 1896 by a French educator who believed the world would have more of a chance for peace if they gathered to play sports. He designed the five rings that represent the Olympic Games. The rings stand for North and South America, Africa, Asia, Europe and Australia. Athens most recently hosted the Summer Olympic Games in 2004.

Most common Greek names are based on religious saints. On the days that a saint is celebrated in the church, anyone named after that saint celebrates his or her “Name Day.” For example, on May 21 Constantin and Helen are celebrated. All Constantines (or variations such as Costa, Gus, Dino) and Helens (Ellen, Eleni, Lena) are wished a Happy Name Day by family and friends.

Evil eye is believed to be a curse that is given by a glare that has negative intentions. Anger, envy, jealousy can cause the evil eye curse. The curse can cause bad things to happen to the person who received the curse, such as a string of bad luck or illness. Wearing a special charm called a mati (meaning “eye” in Greek) is believed to help prevent the curse from ever happening. They are found in homes and offices, on jewelry and keychains, and often over a baby’s crib. 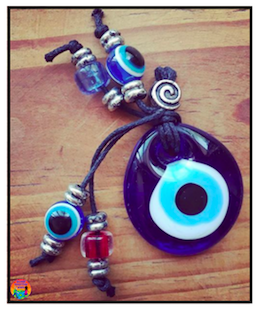 6. Finding a coin in your slice of the New Year cake is lucky.

Vasilopita is a Greek cake eaten during the new year celebrations. It is named after Saint Basil (Agios Vasilis) whose Name Day is January 1. A coin is baked into the cake, and the person who gets the slice with the coin in it is believed to have good luck in the coming year. The slices are served in a particular order. It begins with serving the oldest person down to the youngest person in attendance, and then symbolic slices are cut for family members or friends not in attendance, the house, the church, charities, etc. The top of the cake is decorated with powdered sugar. 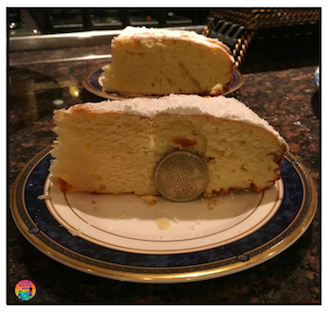 7. A job where you have to stand completely still.

Evzones are the elite Greek soldiers that stand guard in front of the Tomb of the Unknown Soldier. Each soldier stands guard for about an hour at a time, and three times within 48 hours. They must stand completely still until it is time to switch with another guard. The “changing of the guards” takes place every hour on the hour, 24 hours a day. During the changing, the Evzones perfectly coordinate their moves in slow, deliberate motions to get their blood circulating again. Every Sunday there is a large gathering in front of the Parliament building in Athens for the ceremonial changing of the guard that includes a marching band. 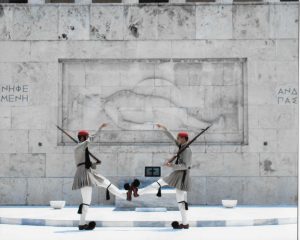 8. Kids everywhere enjoy playing games with their friends. Try this one from Greece! 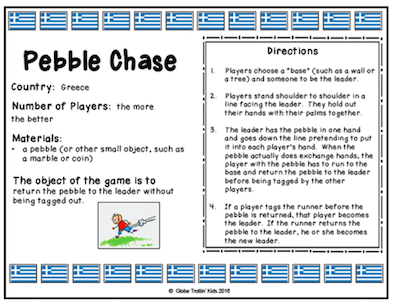 9. Greek gods were the superheroes of the universe.

The Greeks have wonderful stories (myths) to tell about their many gods and goddesses, heroes, monsters, adventures and battles. Each Greek god had one or more magical powers that they used for a variety of things. The most important god in Greek mythology was Zeus, the god of the sky and the ruler of the Olympian gods. His weapon of choice was the thunderbolt. Others included Poseidon (God of the sea) and Artemis (Goddess of the hunt).

Emerald waters, beautiful beaches and sunsets, quaint villages, and warm and welcoming locals – the Greek Islands are an integral part of the country’s history, culture, and traditions. Scattered across the Aegean and Ionian Seas, each island has its own unique charm. The Cyclades islands are known for their whitewashed towns with blue shutters and doors (Santorini) while the Ionian Islands are more known for their greenery and Venetian influence (Kefalonia). The largest Greek island is Crete, and one of the smallest islands is Paxos. 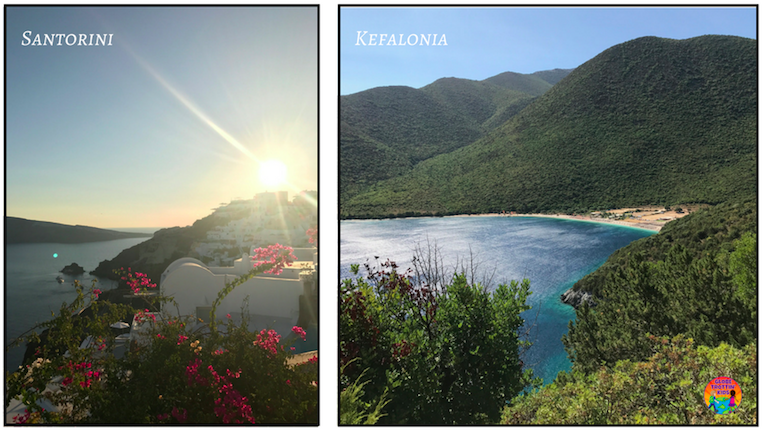 We hope you enjoyed finding out about the beautiful country of Greece.

10 Fun Facts About Germany For Kids