What Is A Talking Feather?

The Native American tradition of using a talking feather (or talking stick or stone) is just one example of the many cultures around the world that have developed wonderful tools that help ensure everyone has a voice in their community.  Although every tribe is distinct and different, the general idea is very much the same.  A beautiful and meaningful object helps everyone focus attention on one speaker at a time, until everyone is heard and has spoken their piece.

How to Make a Talking Feather

A talking feather can be as simple as a large undecorated feather passed from hand to hand.  More often, it is decorated; its base is wrapped with colorful string, leather or beads.  You can easily craft your own talking feather at home with your children, using whatever materials you have on hand.  The photo below shows a talking stick we made, decorated beautifully with colorful pipe cleaners and feathers. 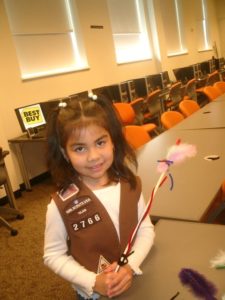 How Does The Talking Feather Work?

Here’s an easy way to get the hang of a talking circle and use your talking feather. First make or find your special object and explain the basic idea to your group as they are seated in a circle.

You can start with a circle using a topic of conversation that is easy and stress-free, like a gratitude circle.  The first person holds the talking feather out in front of them and says something they are grateful for.  When they are finished, they point the talking feather to the next speaker, who takes it and has their say.  This continues until everyone who wishes to speak has been able to do so.  And, while each person is speaking, everyone else is quiet and listens.

Once kids grasp this basic concept in regard to taking turns and listening to each other, you can then use the circle to talk about other matters such as group plans or maybe even discuss a problem or more difficult situation, such as an incident of bullying.  The same rules apply here; the speaker has their turn and then passes the talking feather along to the next speaker.

If a teacher or adult is present as a moderator, they can help kids stay focused, be concise and speak respectfully to one another.

The Legend Behind The Talking Feather

Sometimes when people argue or disagree, the main problem is that they don’t understand the other person’s perspective.  Given time and space, this traditional tool can help build two very important skills – listening and empathy.

If you’d like to hear one of the legends behind the talking feather, here’s a story written by a friend of mine, Bobbie Jo Scheren (Eastern Delaware from Lakota tradition), who dances with me in the local Pennsylvania pow-wow circuit.  I love how she explains the origin of this meaningful teaching and listening object through story.

Many winters ago the people received a gift called the talking feather. I will share with you the story of how this came to pass.

When the call came to the young mothers in the village to take their baskets and gather the fruit and berries, the old grandmothers, whose legs had lost the fast walk and sure foot of the doe, were left to care for the young children. The mothers honored the grandmothers by giving them this responsibility on those days.

It is believed that the young children have many dreams and visions to collect before they are grown. They were given a bit of sleep in the warmth of a darkened lodge before Sun has traveled his full path each day. Now let me tell you what happened on one of these days. 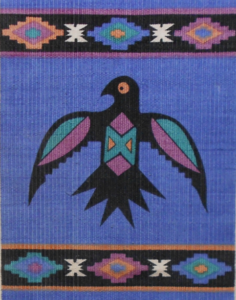 Crow and Magpie, two of our noise-making winged ones were having a terrible argument outside the lodge of the sleeping children. “Caaaw-caaaw” screamed Crow. “Kaaack-Kack” yelled Magpie. They were both speaking at once and they could not hear each other’s point of view on the subject of which tree belonged to which bird.

Now, first one of the grandmothers asked Creator to quiet the voices outside. This was easier than going out to take care of it herself. But Creator let the grandmother know that it was her job to go out and scare off the birds. You see Wakan Tonka (The Sacred Being – Creator) knew that a great gift was coming to the people and he wanted the grandmother to see it happen.

When she could not get the attention of the screaming Crow or yelling Magpie, she called on Eagle, most Wakan (sacred) winged one. “Oh brother Eagle can you chase off these two noisy ones so our children can still dream”, asked the grandmother. With a mighty flap of his wings and a leap from the limb he sailed towards the noisy pair.

He gave a call of warning to the Crow and Magpie as he came close, but they were so busy fighting they did not even hear him. When Eagle saw this he yelled louder and came closer, and that is when it happened.

“Caaaw-caaaw, Caaaw-caaaw”, Crow screamed as he flapped his wings in the air so hard he nearly fell off his perch. “Kaaack-Kack”, yelled Magpie as his wings too flapped up a storm.

Suddenly they both felt the contact of a sacred Eagle wing and saw a feather fall as they froze in mid squawk! (An eagle feather is sacred and is not supposed to touch the ground). Oh my, what had they done? Crow swooped down and caught the feather before it landed on Mother Earth. As he came back to the branch he heard Magpie speaking to Eagle.

“Oh brother Eagle most Wakan (sacred) of our family we did not hear you so near. I am truly sorry for the injury I have caused you.”

Crow was surprised to hear such an honorable thing come from the mouth of this rude neighbor. He held the Eagle feather in one claw and spoke with dignity.

“I have many times been a naughty bird, but brother Eagle I think this may be the worst I have done in many moons. I am very sorry for this bad thing I have done.”

Magpie was shocked, could this be that unruly Crow who spoke such wise words? Crow handed the feather to Magpie so he could give it back to Eagle.

As Magpie took the feather their eyes met and with no words at all they both knew that this mistake would not have happened if they had not been fighting.

Magpie spoke as he took the feather and said, “I am ashamed, brother Eagle, that my loud talk and harsh words were more important to me than solving our problem.”

He looked to Crow for a sign of understanding. Crow took the feather back from Magpie and said, “We have disturbed the two legged children and torn from your wing a sacred feather and now we return it to you with a request for your forgiveness.” 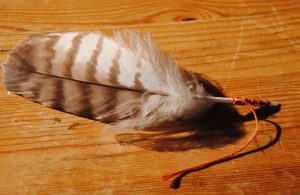 Eagle had watched all this with wise eyes and an open heart. He knew the lesson of listening had been learned by his little brothers and he saw that the grandmother looked on with learning eyes also. So he said to Crow, “Give my feather to the grandmother so that she might dress it with beads and leather and fur to make it even more beautiful. Let her keep it in her lodge and teach others to create this fine looking feather.”

Eagle said, “We will call this sacred item a Talking Feather. You have seen it’s power, grandmother. Tell all the people that when they come together for Council Fires or at any gathering where ears might be shut, to bring out the Talking Feather and let only the holder speak. This will be done in an honorable manner letting everyone have his say. Begin with the highest ranking Elder and pass the feather until all have spoken.”

“When the feather is held with its back to the listeners and the inside curve to the speaker he will hear his own words first as they come back to him. This will help to tame the harsh tongue of the two legged.”