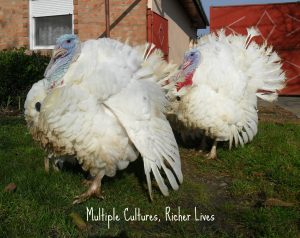 When we travel, my family makes the guys at passport control laugh. Sometimes we have quite a bit of explaining to do. Then they laugh again and shake their heads before waving us on. The four of us travel on three different passports and speak to each other in a mixture of languages, one of which has nothing to do with the passports. We’re not global citizens as such, but due to our multiple cultures we are definitely European citizens.

I’m Scottish, which means I travel on a British passport and speak English to my two kids. My husband is ethnically Hungarian but comes from the Banat region of Romania, so he travels on a Romanian passport and speaks Hungarian to the kids. We live in Germany, where our kids were born, and they travel on German passports. My two-year-old daughter speaks an eclectic mix of English, Hungarian and German with a few words of her own invention thrown in for good measure. So far my four-month-old son just makes cooing noises and spits up all over the place, but he’ll start speaking soon enough.

We just got back from a three-week trip to Romania, where we were staying with my husband’s parents. Obviously the main reason we went there was to see them and let them spend time with the kids, but another important reason was to teach our kids (well, our daughter mostly at this stage) about where their dad is from. It’s important to both me and my husband that we pass on not only our languages but also our respective cultures, so that the kids feel a strong connection to both of our countries and feel at home in both our cultures.

“Culture” to us is less about formal things like literature and music and more about how people live in a particular place. In my husband’s home town if you want milk you don’t go to the supermarket – you go and see the lady down the street who has four cows. If you want to take your kids horse riding, you don’t go to the stables – you go and ask the guy who owns the field opposite the house if your kids can sit on the back of one of his horses for a while. Want potatoes? Here’s a spade. Need the bathroom? The outhouse is over there. Have leftover food? Give it to the chickens. You get the picture.

My husband grew up in a place where people live closer to nature. My mother-in-law explained that this is partly due to the restrictions that were in place under communism. You could either stand in line for two hours every day and hope there was some milk left when you got to the front (it was rationed, so there was a limit to how much you could buy even if there was some left) or you could buy a goat and get far more milk than you needed every day and sell the excess to the neighbours.

Being a city girl from the other side of the iron curtain, this culture is at once totally alien and also completely fascinating to me. The people in my husband’s home town are not poor and primitive as they are often perceived in the West; they are resourceful and much less wasteful than people in most Western countries. And they eat way better. Romania doesn’t really have an organic food movement because they never really had non-organic food. Admittedly it’s kind of gruesome to know the name of the turkey you’re eating, but on the other hand you know exactly where it came from, what it was fed, and how it was killed.

My kids can only benefit from this culture. I want them to learn to love it and accept it as the most normal thing on earth. But I also want them to know and love my own culture and that of our adopted country. All three cultures are very different, with different customs, ways of thinking and ways of interacting with other people. By raising our kids with all three cultures we hope to open their eyes and their minds to yet more cultures so that no matter where they travel they will be aware of and interested in the way things are done there. With this heightened cultural awareness, hopefully they’ll notice not only the differences but also the similarities that are common to all cultures throughout the world and will realise that no matter where someone is from, their ideas and ways of doing things are valuable and worthy of respect.

That to me is a true global citizen.

To read more about our adventures as a multicultural, multilingual family, hop on over to www.lingolised.eu. I’m looking forward to your visit!