July 18th is Nelson Mandela Day, the celebration of one of the most inspirational persons of the century. Mandela spent 27 years in prison under the apartheid government of South Africa. While in prison, he meditated and reflected upon the hatred and discrimination that held the people of South Africa captive. Mandela understood that it was only through love, forgiveness and the power of personal example that people could be liberated from this most grievous of prisons, and he dedicated his life to ending prejudice and injustice in all its forms.

When he was released from jail, 100,000 people gathered to celebrate his freedom. A few years later, in 1993, Mandela was given the Nobel Peace Prize, and in the following year he was elected the first Black African president of South Africa. As President, he worked to promote the unity of all South Africans – whether black, white or other background – as he believed that in the eyes of God all were equal. Although Mandela passed away on December 5th, 2013, at the age of 95, his spirit lives on everywhere. His life and legacy are a testament to what one person, relying upon the power of faith and love, can achieve.

When Mandela passed away, I felt the best way I could pay tribute to him is through music. Nelson Mandela found great solace in the poem ‘Invictus’ (Latin for undefeated) during the 27 years he was in prison. Written by William Henley in 1875, I felt inspired to set the poem to music.  You can listen to the piece here.

My son Taraz also created a video for the song, you can view it here. 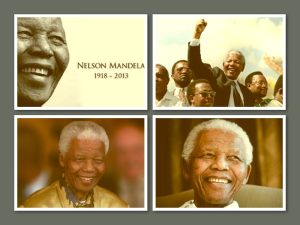 Some inspirational quotations by Nelson Mandela:

“I am fundamentally an optimist. Whether that comes from nature or nurture, I cannot say. Part of being optimistic is keeping one’s head pointed toward the sun, one’s feet moving forward. There were many dark moments when my faith in humanity was sorely tested, but I would not and could not give myself up to despair. That way lays defeat and death.”

“I learned that courage was not the absence of fear, but the triumph over it. The brave man is not he who does not feel afraid, but he who conquers that fear.”

“For to be free is not merely to cast off one’s chains, but to live in a way that respects and enhances the freedom of others.”

You can also read our earlier tribute to Nelson Mandela, written after his passing.

Vocalist, composer, pianist, and artist, I consider myself a world citizen; my parents are from Iran, I was born in the US, raised in Kenya, and now live in China. In between I have lived in Israel and Hong Kong. As well as a love for creating music, I am passionate about making crafts, designing, painting and organising.