I have two boys ages 10 and 7 who for a large part of their lives were monolingual, English speakers. We had always wanted to raise multilingual kids and introduce them to Arabic and French (the languages of my husband’s home country – Morocco). But we lacked the resources and drive to do so. Then about a year ago we decided the only way they were going to learn was if we moved to Morocco. It was a gigantic step and leap of faith for our family but we’ve now been living here for nearly seven months and believe it has paid off. 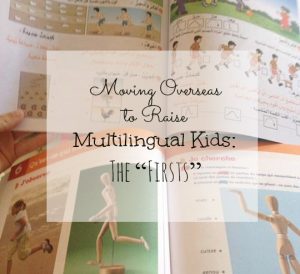 We chose to enroll our children in a private, Arabic/French school. On the first day of class they walked in and spoke not a word of either language. We worried how it would go. For weeks I knew they were having a hard time but we began to see progress. Our oldest son was quick to start speaking Darija, the Moroccan dialect of Arabic. Within three months he could hold and understand conversations. He has beautiful handwriting and had few problems in the French portion of school. But, aside from learning the languages, the material that was being covered consisted of things he already knew how to do. He knew the math, he knew how to write in cursive, he could read fluently in English, etc. For our younger son it was more of a challenge.

At six years old, he was entering first grade and was already behind. He didn’t know the Arabic alphabet and the only handwriting he had done was printing. In Morocco, French writing is taught exclusively in cursive script. He couldn’t read or identify the letters in cursive because he hadn’t been exposed to them yet. A few months in and he decided that he didn’t like Arabic and was just going to learn French. The exact opposite of our oldest son. He would come home singing French songs, he would put up no problems to sit and do his French coursework, but Arabic? No. He wasn’t.

A few things have happened that I call firsts. They are moments that have made me ponder both outcomes of our journey.

First, I sat down with my youngest about two months ago and thought we’d try reading in English. We hadn’t done this before (him reading to me) so I wasn’t sure how it would go. But, he picked it up and read. He just read it in English! He told me, “Mom, I read in French at school so I just read this with English words.” I have no idea how he did it, but he did. I never thought the first language my child would read in, would be his third language (French).

On the (potentially) downside of moving overseas for education, I realized that although this same child could write in Arabic script and cursive he no longer was printing and hadn’t worked to develop proper printing skills. Is this a bad thing? I’m not sure yet. ­

Our oldest took like a fish to water with learning new languages. He enjoyed it. Until he hit a wall. Though he now is moderately fluent in speaking and oral understanding, he struggles with Arabic writing and is frustrated that he can’t read well. There’s a much greater expectation here for children to meet hard and fast milestones. Children are not just passed on to the next grade, if they fail to meet the thresholds during their exams they are kept back. This worries him but we do our best to reassure him that it will happen in time.

Both of our children have said on many occasions that they want to go back to the United States. That they like school there better (and they probably do), but we still strongly believe giving them the language skills they are learning here would not be possible in the United States. We know that they will struggle, and we’ll be here to support them through it. But, the value of being tri-lingual far outweighs the struggles we are going through today.

Our advice to parents trying to raise multilingual children? Don’t give up. Whether you’re teaching them at home or in an environment that is multilingual don’t let the challenges and criticisms you might face make you feel like you should throw in the towel. If you’re thinking about moving to another country where your target language(s) are used it will help, but it won’t make things “easy.”  There are still many challenges and struggles as your child learns the new languages and tries to retain their first language. Most of all, stick with it and connect with other parents doing the same to give you support and encouragement. You’ll need it for the rough days!