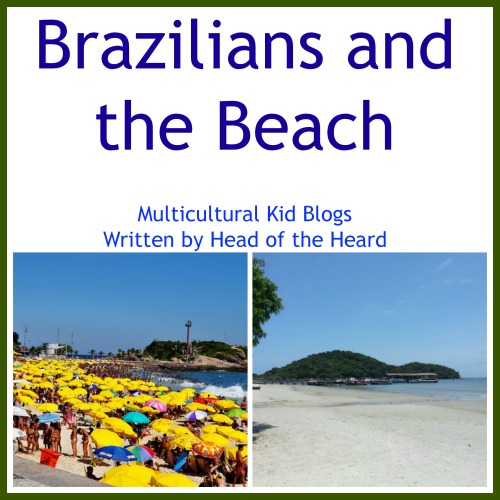 Brazilians and the Beach

There are two types of Brazilian city: those with a beach and those without.

The coast of Brazil is almost 8, 000km long, one of the longest in the world.  Over 26% of Brazilians live in a town or city on the coast, and many more live within an hour’s drive.  Most of the major cities lie along the coast and so the beach has become an integral part to the lives of many Brazilians, either as part of their everyday lives or as the ultimate objective for any long weekend or holiday. 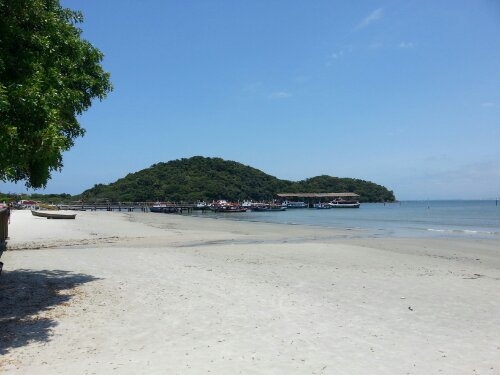 All beaches are public in Brazil.  It against the law for any beach to be privately owned, instead they are all owned and administered by the Navy.  This means that many Brazilians will tell you that the beach is one of the few places in the whole country where social barriers do not exist.  The idea is that on any beach you could find rich playboys sunbathing next to homeless people, housewives and families rubbing shoulders with actors and models.

This isn’t quite true as there are lots of barriers preventing the poorer people getting to the better beaches: distance, travel costs, prices of food and drink, just the fact that nobody wants to be sitting near people they don’t know or understand.

Often, the Brazilian beach will be split up into its different tribes.  The famous Ipanema beach in Rio is a great example of this.  As you move from one end of the beach to the other you pass through the gay part, then the evangelical Christian part, then the playboy part and so on.  You know where are according to the signs on the bars and the flags that people fly as local landmarks in case you get lost. 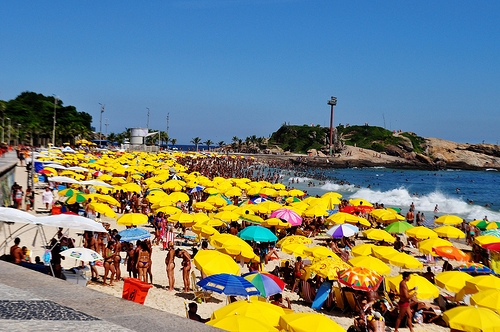 In many Brazilian cities public spaces are limited.  There are very few parks or open areas where people are encouraged to go.  If there are open spaces then they are often poorly maintained, have few seating areas and are usually quickly taken over by homeless people or those looking to buy or sell drugs.

The beach, therefore, acts as a community space where everyone and anyone can congregate for whatever reason at whatever time they like.  Families can arrange to meet with each other, kids can see their friends, the retired can find a fresh coconut and chat with each other.

In many cities that don’t have this luxury, the only safe public space to go to is the shopping centre or shopping mall.  There is an argument that one of the reasons there have recently been so many problems with rolezinhos (a type of flash mob) in Sao Paulo recently is that the young people don’t have anywhere else to go. 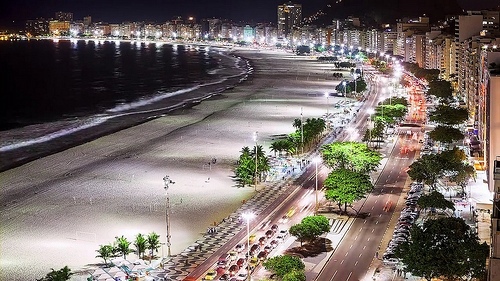 The beach is a very family-friendly place.  Apart from the more exclusive resort-type locations, you are almost guaranteed to find a lots of children running around and playing in the water’s edge.  Here are a few tips if you want to fit in and look like a local family.

Time – Lots of families wake up early and go to the beach until about 11 o’clock, come home and prepare lunch and then go back out again after 4.  The reason for this is that the midday sun can be too much for small kids, or indeed anybody, to cope with.  Teenagers tend to skip the first session and meet up with their mates in the afternoon.  Parents also often skip the first session and send the grandparents out to take control in the morning.

Activities – There is always some beach football or volleyball around, but most kids head straight for the sea.  This can be a problem because some of the beaches have very strong currents and the water can be surprisingly cold (the current comes up the coast from the south and every year there is a news item about the odd lost penguin being found in or around Rio).  Adults tend to take it in turns to monitor what is going on in the sea, but any adult will help any child in difficulty.

If your child is too young to go in the sea bring along an inflatable and fill it with sea water.  You will also be able to keep this in the shade of the parasols.   If your child is a bit older but you want them out of the sun for a bit, there are always sandcastles.

Paraphernalia – the dedicated and experienced beach goer will have all of the following: flip-flops, clothes to leave the beach, towel, sun lotion, collapsible beach chairs, a parasol, buckets and spades, some form of transportation device that can be turned on its side and used as a table, hats, sunglasses, money in small denominations to be used for buying ice cream and drinks.

Clothes:  Short and skimpy, for both men and women.  It doesn’t seem to matter how big or how small you are, little bikinis are the order of the day for women and tight trunks for men.  It should be noted that, although Brazilian women leave almost nothing to the imagination it is against the law to go topless.  That little triangular piece of material is a must!  Children’s wear imitates the adults.

Food: Shrimp, churros, beer, ice-cream, coconuts, water, ice-cream and soft drinks are the main things you can find for sale on the beach.  There are usually people walking up and down the beach all day long selling all kinds of things, but they will come at a hefty mark-up.  To be honest, if you buy the shrimps you should be prepared for an uncomfortable evening. 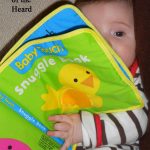 Stephen Greene writes about bringing up a bilingual family in Curitiba, Brazil and life in general in Brazil at Head of the Heard.  He is originally from the UK but has travelled the world as an English teacher, teacher trainer and materials developer for the last 16 years.

Copacabana by Night by RyanMBevan – CC-BY-2.0

Ilha do Mel by Stephen Greene