Antisemitism, defined as hostility toward or prejudice against Jewish people because of their religious identity, is rearing its ugly head with a vengeance right now. Just within the past month, we’ve had Kanye West (aka Ye) tweeting that he was “going death con 3 On JEWISH PEOPLE.” We’ve had Kyrie Irving suspended for five NBA games after tweeting the link to a film that contains antisemitic content. And the FBI in NJ identified a “credible” and “broad threat” to synagogues in that state.

Honestly, it feels like a bit much. But, it’s important to remember that, as the incidents pile up, so do the opportunities. Avoiding the topic is not an option, and our kids often know more than we realize. Luckily, talking with your kids about antisemitism is probably easier than you think because you already have all the skills you need. 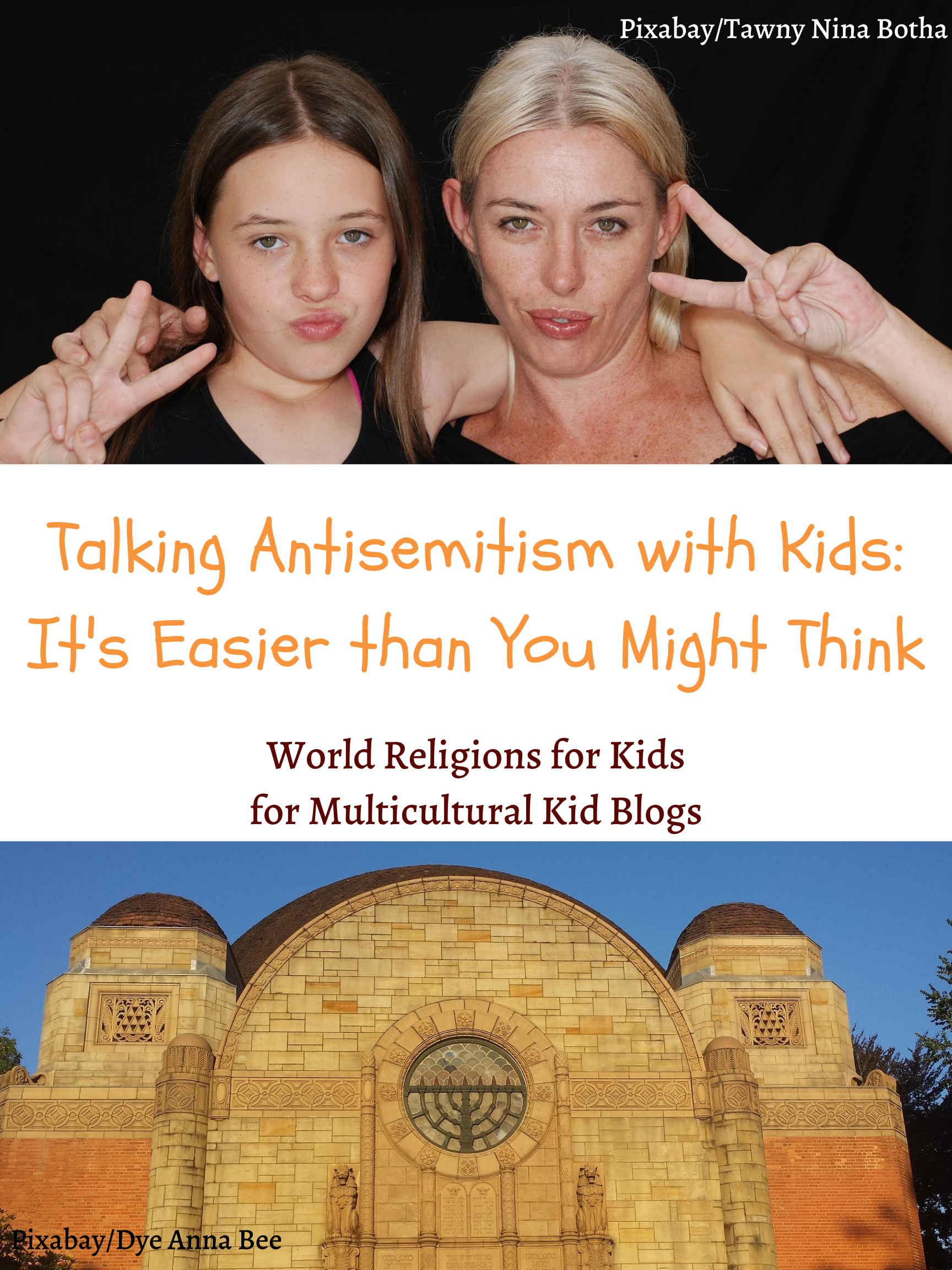 When talking to parents and educators about antisemitism, I hear all kinds of excuses to justify sidestepping the entire issue. But, we already know that helping kids navigate life’s tricky situations is a really important part of parenting. In fact, the more challenging the subject matter, the more we need to talk about it!

Let’s give credit where credit is due. As parents, we are used to dealing with difficult topics, and we’ve developed some really great strategies over the years to do just that. Dealing with antisemitism is really just a matter of adapting our skill set.

For example, few parents enjoy talking about death. But death is a part of life. Grandparents, pets, and even classmates sometimes die. Moreover, no one really knows what happens after death. You might have some beliefs about that, but we almost certainly lack answers to all the questions kids could ask. Death is also fairly abstract. And yet, few parents think we should avoid talking to kids about death.

The same is true for racism. Yes, it can be abstract. And, yes, it’s easy to assume your kids already know racism is wrong. But, over the years, it has become increasingly clear that we absolutely need to be talking about racism with our kids. We need to explain what it is, how to recognize it, how to call it out, and how to be an ally. And we need to do it explicitly.

So, consider taking that same parenting toolkit – used for all the other difficult topics you discuss with your kids – and modify it, as needed, for the antisemitism conversation.

Stick with Your Communication Style

Experts also generally suggest starting with questions. Ask your kids what they already know about Judaism, Jewish history, and antisemitism. You might be surprised at their answers. Almost all kids know about the Holocaust by middle school (at the latest), and even young kids often know something about Hanukkah. If you are Jewish, lead with that. If your family practices another religion, consider starting there. And, if your family is news-conscious, your kids might have already heard about recent antisemitic incidents.

It’s also important to keep the discussion age-appropriate. Young children are quite familiar with concepts of fairness and kindness. For slightly older children, consider including questions about their own emotional reactions to things they are hearing, seeing, or learning about. Teenagers are becoming increasingly aware of varying perspectives and have almost certainly encountered news stories, memes, and social media posts – both positive and negative – about Judaism.

The idea is that their starting point should be your starting point. If you get into unknown territory, explore the topic together. Just remember: you already know all this! This is what you do all the time anyway. Don’t panic just because the topic is related to religion.

My son is a teenager who loves basketball, rap music, and TikTok. He knows who Kyrie Irving is and who Kanye West is. He also knows at least one classmate who is Jewish. Being a rather typical teenager, he also hates any talk that feels like a lecture, and he has lots of his own opinions! Finally, we’ve had many conversations over the years, mostly during dinner, about antisemitism.

For me, then, this current round of incidents offered an opportunity to remind my son about what antisemitism is and to make the point, yet again, that it is both ignorant and dangerous. First, I asked him if he had heard about Kanye West saying he was going “death con 3” on Jews. (He had.) Next, I asked him if he had Kyrie Irving on his fantasy basketball league team. (He doesn’t but a friend does.) Finally, I asked him if he had seen the meme of white men in LA standing on an overpass with a banner stating that “Kanye is right about the Jews.” (He hadn’t.)

My questions and his answers resulted in a long discussion about a bunch of things, including Kanye West’s White Lives Matter t-shirt, the way fashion/shoe companies use (and perhaps exploit) Black celebrities, what bipolar disorder is and how it does not cause antisemitism, and which basketball shoes are the best (not related to antisemitism, but very important to my son).

So you do you. And let your kids be who they are. Then, use all of that to take on the parenting thing to the best of your ability.

As with other difficult topics, avoiding conversations with our kids about antisemitism really isn’t an option – especially when serious stories about antisemitic events are cropping up, almost daily, in the news and across social media. However, there’s no need to get flustered just because religion is involved. You already know how to communicate with your children, how to discuss sensitive topics, and how to celebrate diversity. With a little tweaking, you can use the parenting skillset you’ve already developed to address religiously motivated hatred both conscientiously and gracefully.

Teaching Kids About Diversity Through Dignity, Value, and Respect

This site uses Akismet to reduce spam. Learn how your comment data is processed.