Click here to read part 1 for the first three themes for traveling with kids to Rome. 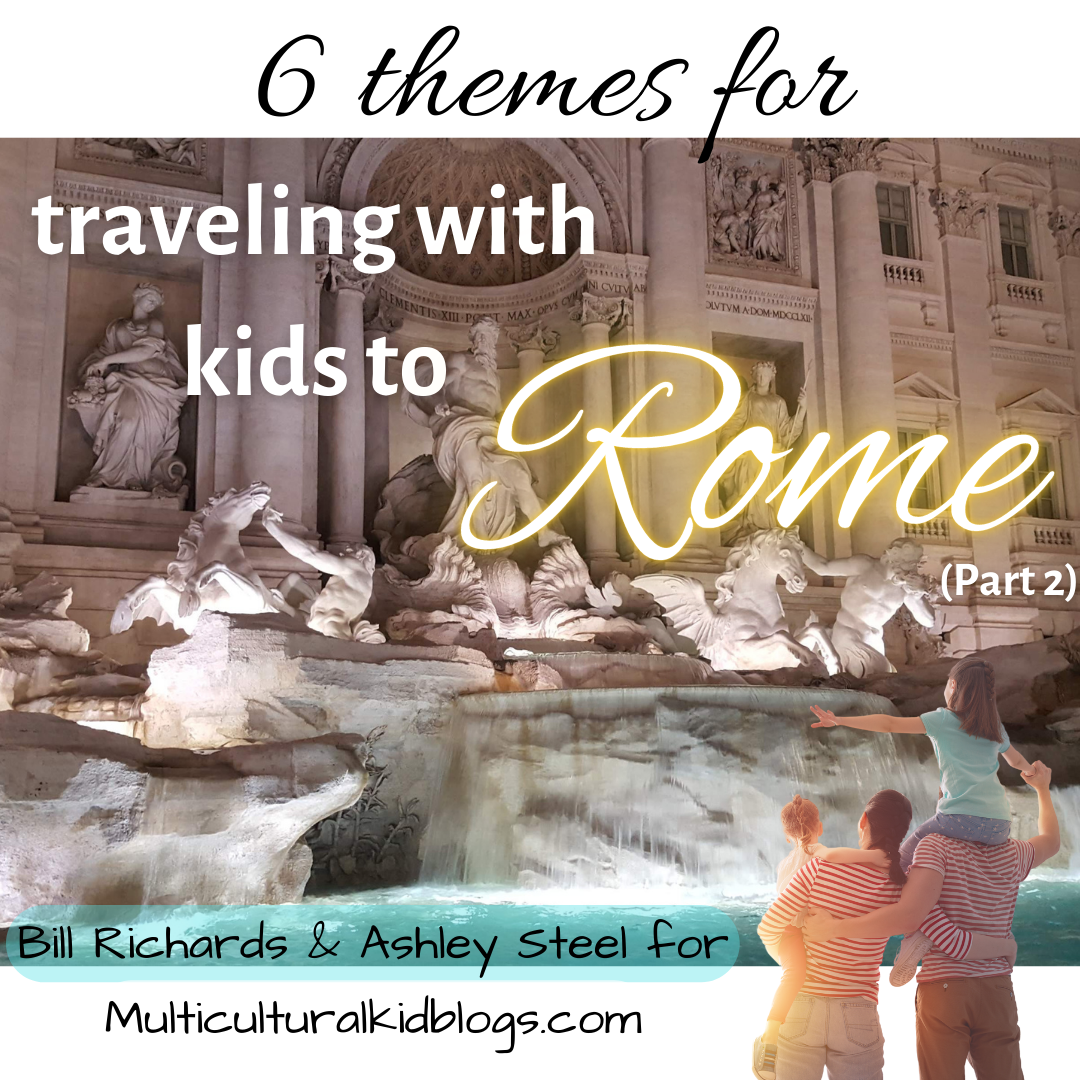 Water has been an important part of Rome for a very long time. In ancient Rome, water was made available to the general public at many fountains throughout the city. Large and elaborate public baths were constructed for hygiene, fitness, and relaxation. An engineered system of aqueducts used gravity to bring water from springs and lakes surrounding the city. Water came from up to 92 km away. Eleven aqueducts were constructed from 312 BC to 226 AD to quench the thirst of the city. Though known for their stunning stone water bridges, in reality, most of the path of the aqueducts was underground to avoid loss from evaporation and theft.

Today, there are still many beautiful fountains all over Rome, though the public baths are long gone. Most of the original aqueducts are no longer functional, but water for Trevi Fountain is still sourced via an aqueduct! The volcanic lakes in the hills around the city still provide a source for Rome’s water, and you are never more than a couple of blocks from a nasone (meaning large nose), which is a kind of portable outdoor drinking water fountain that works all year around. Look for a dark green “fire hydrant” with an emerging running water nozzle. Block the flow with your fingers and the water squirts out the top. It’s easy and convenient to fill your water bottle on hot summer days.

The Aqueduct Park is an area in southern Rome where many aqueducts converge on their way into the city from the Castelli Romani (Roman hills to the southeast). It is both an excellent free archeological sight and a great park. The Vicus Caprarius Museum (near Trevi Fountain) is devoted to ancient urban water management, with displays of aqueducts and cisterns. And you are never far from one of the many famous fountains, which now mostly date from the Renaissance, and of course, the nasone.

Ancient Romans drank a lot of wine partly because the fermentation process made wine more potable than water. Today, water is safe to drink from the tap and tastes good. But it is also naturally high in calcium which can eventually clog coffee makers and shower heads.

When people think of volcanoes in Italy they typically think of the active Mt. Etna on the island of Sicily and Mt. Vesuvius destroying the city of Pompeii in the 1st century AD. But there are also dormant and extinct volcanoes nearer to Rome (Mts. Albano, Sabatini, Cimini, Volsini) that helped to produce the region’s freshwater crater lakes (Lakes Bolsena, Vico, Bracciano, Martignano, Albano, Nemi). These volcanoes last erupted more than 2,000 years ago, and more likely 35,000-70,000 years ago, so heading out to visit the lakes and their surroundings is more than safe enough.

All of these lakes have the classic circular shape of a crater and provide for an excellent summer day trip. Some are large (Bolsena) and some are small (Martignano, Nemi). Only Bolsena allows public motor boats. All of the lakes have public access and most have beach clubs that will rent beach chairs and umbrellas for those looking to cool off. Lake visits can blend history and culture with physical activity and freedom for active kids.

Lake Bracciano boasts a fantastic castle on the crater rim, which has pre-arranged programs specifically for kids. Lake Albano has Castel Gandolfo on its rim, which serves as a retreat for the pope and whose garden can be toured by the public. On the shore of Lake Nemi, there is a museum dedicated to the party boats that Caligula used as a diversion from the stresses of being Emperor.

Circa 500 BC, ancient people manipulated the water levels in both Lake Nemi and Lake Vico through tunnels excavated through the crater wall. This was done to both increase the arable land inside the crater and to irrigate farmland outside the crater. Hazelnuts used to produce Nutella are grown in the crater surrounding Lake Vico.

Of course, everyone’s trip to Rome should include Italy’s favorite frozen treat – gelato! Distinguished from typical ice cream by lower fat and air content, and richer flavors, you will find gelato at small family-run gelaterias in all corners of Rome, which are typically open all year around. Locals will swear by their favorite gelateria! But the best gelato place will almost always be the one in front of you! Am I right kids? And gelato makes for an excellent incentive to get through another museum or archeological site.  A gelato-themed visit to Rome can bring you to any and all the neighborhoods of the city for exploration followed by a reward.

Guttilla, across the street from Villa Torlonia (a city park), drizzles liquid chocolate into your cone before adding your favorite gelato flavor. Fatamorgana, which has several locations (including in the Monti neighborhood), has the most daring diversity of gelato flavors. And Fassi, not far from Termini Station, is one of the oldest and most beloved gelaterias, and has prearranged behind-the-scenes tours. Researching Roman gelato would make for an excellent dissertation topic.

Most gelaterias offer lactose-free alternatives. This includes granita, which is similar to a slushy with natural flavors like lemon, strawberry, and almond. Granitas originated in Sicily and are more typically found in the summertime when they are a lighter alternative to gelato.

Do you have more theme ideas for traveling with kids to Rome? Share in the comments!

Including Kids in All Stages of the Family Trip

Family Travel Guides From Around the World

Bill Richards has lived in Rome since 2018. He is co-author of 103 Other Adventures In and Around Rome: Beyond the Biggies like the Colosseum, the Pantheon, and the Vatican (2021), 100 Tips for Traveling with Kids in Europe (2016), and Family on the Loose: The Art of Traveling with Kids (2012). All are available on Amazon.