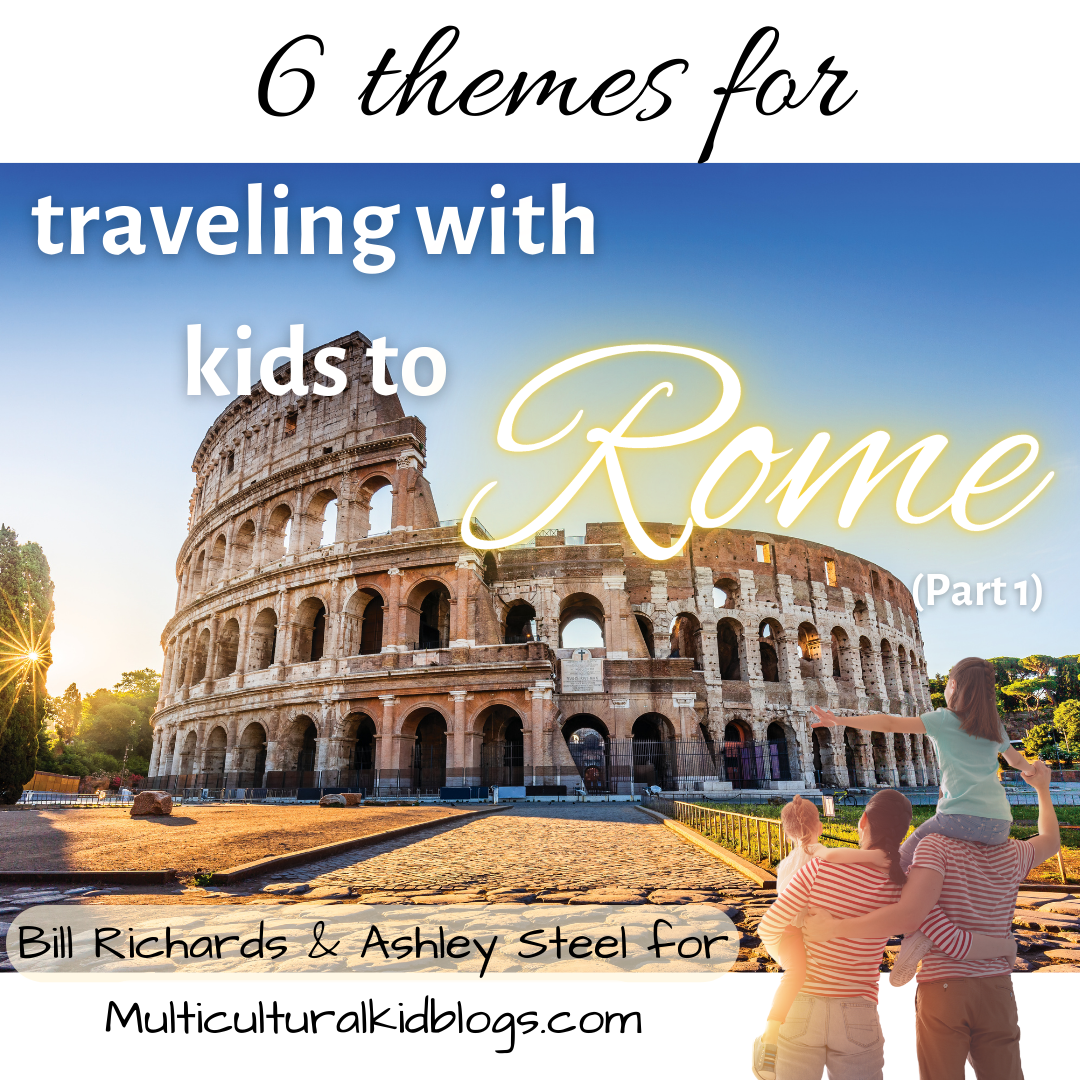 Rome has so much to offer that it can be daunting for the visitor to devise an itinerary that appropriately samples the food, culture, language, and history! Especially for those traveling with kids to Rome, picking a theme can help direct activities, focus the kids, and enable learning on a particular topic. Here are six themes to help build an itinerary especially geared toward the traveling family looking for a little deeper and more interesting experience.

The layers of Roman history can be overwhelming and confusing. Ancient Rome, the Middle Ages, the Renaissance, and Modern Rome are some of the most important epochs. Ancient Rome started as a kingdom around 750 BC, evolved into the representative democracy of the Roman Republic about 250 years later, and transformed into an Empire around year zero. The Western Roman Empire (which included Rome) collapsed in about 500 AD, but a schism created the Eastern Roman Empire, based in Constantinople, which lasted until almost 1500 AD. Emperors, also known as Caesars, ruled Rome for nearly 500 years.

The last leader of the Roman Republic (Julius Caesar) was essentially a dictator, which was formalized when his great-nephew (Augustus) succeeded him to become the first official emperor. The following emperors had names like Tiberius, Caligula, Claudius, Nero, Trajan, Hadrian, and Constantine. They are each famous for different things and you can still see their names all over town.

Visiting sites in order of their emperors can give context and help organize history. Augustus built a mausoleum for himself in 28 BC that now stands as a museum. Emperor Vespasian initiated the construction of the Colosseum in 72 AD, for gladiator competitions and animal “hunts”. Gladiators, of course, are still the icons of that period. The circular bas-relief on Trajan’s Column, erected in 113 AD, tells the story of his victories on the battlefield. Emperor Hadrian also built his own mausoleum in 134 AD, but it has since morphed into Castel Sant’Angelo, now also a museum. Emperor Aurelian built the city walls in 271 AD to protect ancient Rome from invaders. Many of these walls are still standing.

The role of the emperor was quite treacherous, as they were as likely to be killed by their own guards as to live to old age. Indeed, there was the year of four emperors (69 AD), the year of five emperors (192 AD), and the year of six emperors (238 AD). Somewhat disappointingly, caesar salad dressing has nothing to do with imperial Rome. A guy named Caesar invented it in 1924.

There are four classic Roman pasta dishes (primi piatti or first course on the menu): Cacio e pepe, Carbonara, Amatriciana, and Gricia. All of these refer to the sauce and not specifically to the shape of the pasta. Cacio e pepe is the ultimate Italian comfort food (think mac and cheese) and literally means cheese and pepper. The cheese must be pecorino. Carbonara is made from egg, pecorino and/or parmigiano cheese, and guanciale (cured pork cheek). Amatriciana is a tomato sauce with onions, pecorino, and guanciale. Gricia is similar to carbonara, only without the egg. Almost every restaurant in Rome will be able to make these dishes and it should be compulsory for every visitor to try each of them at least once.

The shapes of pasta are something else entirely. There are a bunch that you’ve likely had before (spaghetti, fettuccini, rigatoni, penne), and stuffed kinds of pasta (ravioli, tortellini), but there are so many more that you might have to do an internet search to make sure that you’re still in the pasta section. There is an etiquette about which sauce goes with which pasta, but the restaurant’s menu has likely already made that decision for you. Generally, the first word of the dish on the menu is the pasta shape followed by a description of the sauce.

There are fantastic restaurants in every neighborhood and corner of Rome. Try getting out of tourist areas to find an authentic ristorante, osteria, or trattoria.

Fresh-made pasta is easy to find at neighborhood markets if you want to try cooking at home. It’s also easy to learn how to make pasta at one of the many cooking schools in Rome. Pasta also makes a fun, light souvenir to bring home and share with friends.

Like people everywhere, Italians appreciate when foreign visitors learn at least a few words of their native language. When traveling to Rome, initial interaction with even just a few words of Italian can make all that comes after seem so much easier. Buongiorno (good morning), grazie (thank you), dov’è il bagno (where’s the bathroom?)… And, unlike in Northern Europe where the locals seem to default to English as soon as a mistake is made in their mother tongue, Italians are prone to let you continue in your broken Italian for as long you can take it. This helps with your learning curve and shades the fact that many Italians are not terribly proficient in English.

Restaurant menus, particularly off the tourist route, are likely to be entirely in Italian. Use your translation app to help avoid common menu mistakes (aglio [garlic] vs alice [anchovies], pesche [peaches] vs pesce [fish], polpo [octopus] vs polpette [meatballs]).  Challenge your kids to at least try to order in Italian and/or to keep a daily journal of discovered Italian words. If your kids are old enough to read subtitles (or even if they aren’t), try watching one of their favorite movies dubbed into Italian with English subtitles, just to get an ear for the language.

The modern Italian language has evolved from the “vulgar” Latin of ancient Rome. Inscriptions in Latin are still commonly found at ancient archaeological sites. For kids studying Latin at school, this can be really fun. For kids not yet studying Latin at school, this will surely be a source of inspiration. Of course, math is a language all its own and Roman numerals are frequent in these inscriptions, but the base year for dates is typically from the founding of Rome in 753 BC, and not from the birth of Christ. Asking help from your kids to translate numbers and dates in Roman numerals can add a challenge to any language-based itinerary.

Stay tuned for part two of 6 Themes for Traveling with Kids to Rome!

Bill Richards has lived in Rome since 2018. He is co-author of 103 Other Adventures In and Around Rome: Beyond the Biggies like the Colosseum, the Pantheon, and the Vatican (2021), 100 Tips for Traveling with Kids in Europe (2016), and Family on the Loose: The Art of Traveling with Kids (2012). All are available on Amazon.