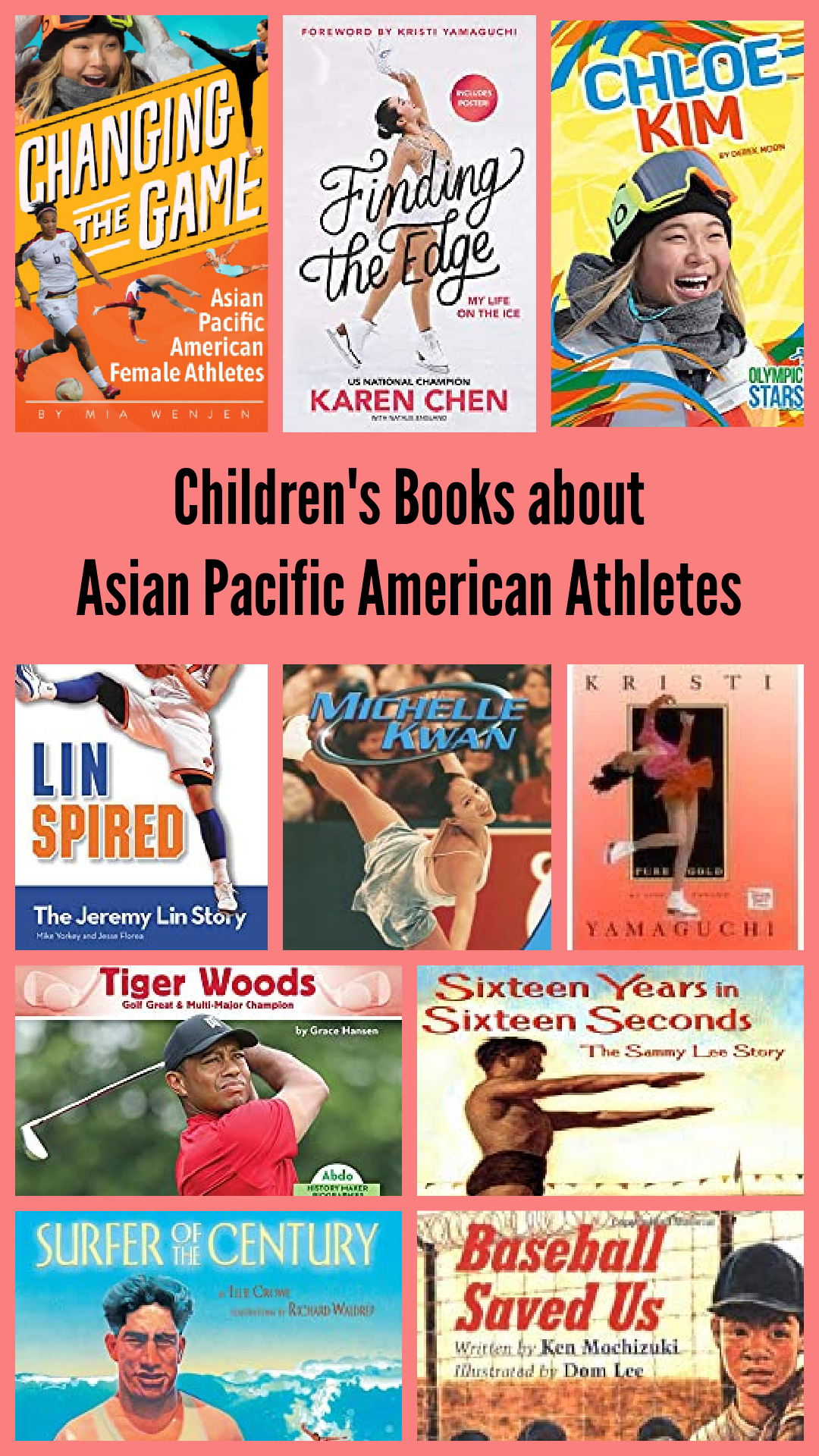 Disclosure: This post contains affiliate links. If you click and purchase, Multicultural Kid Blogs will receive a small commission that will be used towards maintaining the site.

Powerful Stories from the World of Water

I’ll start with two male athletes who made names for themselves in swimming and diving. It’s quite possible you’ve never heard of them, so these books are an excellent way to learn about their stories.

Surfer of the Century by Ellie Crowe, illustrated by Richard Waldrep

Among Duke Kahanamoku’s many accomplishments is his invention of the now-ubiquitous flutter kick used in freestyle (or Australian crawl) swimming. As a young, untrained swimmer, Duke set records that officials refused to acknowledge. He went on to win Olympic medals in Sweden, then Belgium, and then Paris. But, he is best known for his contribution to surfing. As the “father of modern surfing,” Duke introduced Hawaii’s sport of the ancient Kings to the world. Thus, he remains an eternal testament to the aloha spirit. [picture book, ages 7 and up]

This book explores the inspirational true story of Sammy Lee. He was a Korean American who overcame discrimination to become an Olympic champion diver. Along the way, he realized he also needed to overcome his father’s desire for him to become a doctor. [picture book biography, ages 6 and up]

Paula Yoo and Dom Lee also offer a middle grade version of this story in their award-winning picture book. [middle grade, ages 8 and up]

Male Athletes in Other Sports

Baseball Saved Us by Ken Mochizuki, illustrated by Dom Lee

This author’s first picture book is based on his true story. Sadly, Ken Mochizuki’s family was interned at Minidoka Internment camp in Idaho. However, they realized they could use baseball to cope. The little boy in the story is small for his age but perseveres to become an excellent player. Post-internment, things are not much better. Luckily, the boy’s baseball skills help bring everyone together. [picture book, ages 8-12]

A few male athletes have achieved international acclaim. In some cases, many books have been written about them.

Jeremey Lin is a professional basketball player. My Vietnamese-American friend’s son was inspired by Jeremy Lin and read all these books. He now plays basketball in college. It is great to see so many non-fiction biographies about Jeremy Lin. However, my library didn’t have any of these books on the shelves.

I can’t deny Tiger Woods’ achievements on the golf course. However, his personal conduct, in my opinion, eliminates him as a role model for children. Despite the controversy surrounding him, there are numerous books about his life.

Female Athletes in Changing the Game

To help change that, I wrote Changing the Game: Asian Pacific American Female Athletes. This Kickstarter project was funded a month ago. So, I’m in the final leg of bringing this book to life. If you are interested, you can pre-order it here. 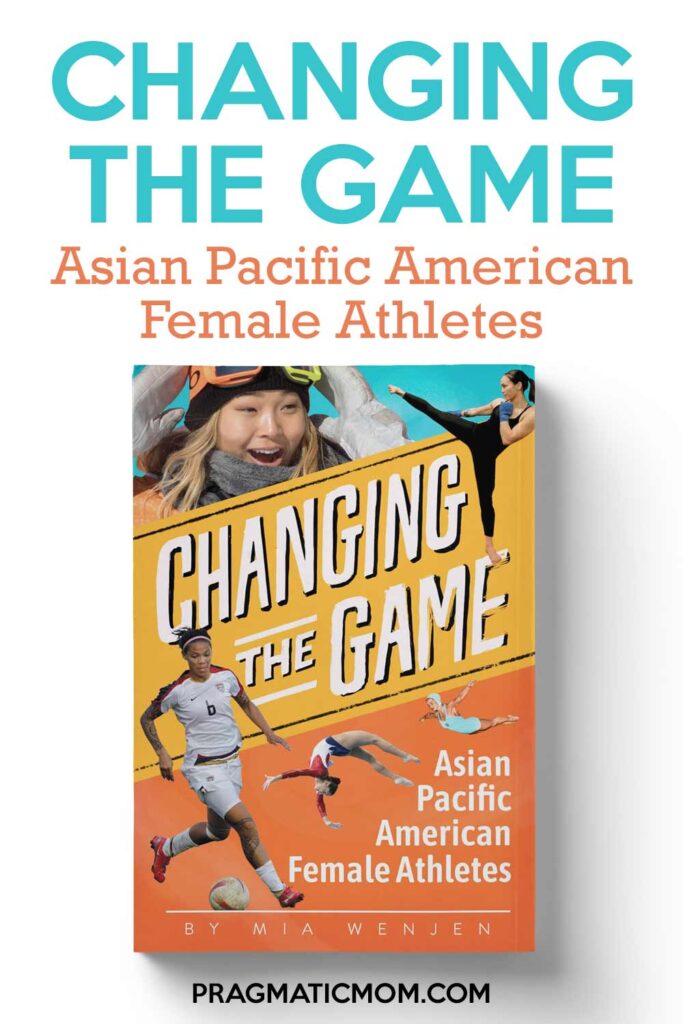 In my book, I highlight 18 Asian Pacific American female Athletes from yesterday and today. Their incredible stories offer amazing examples of dedication and triumph. Hopefully, readers will rejoice when they read about these extraordinary women as they overcome obstacles to prevail in their sport. [picture book anthology, ages 8 and up]

Several Asian Pacific American athletes have excelled at winter sports. They include a snowboarder and two figure skaters. Several books feature their stories.

The mostly ups and a few downs of Chloe Kim’s epic snowboarding career are chronicled in this nonfiction photo-illustrated book. [picture book biography, ages 8 and up]

Additional books about Chloe Kim include:

Finding the Edge: My Life on the Ice by Karen Chen

Kristi Yamaguchi won the gold medal in women’s figure skating at the 1992 Winter Olympics. But, her journey was not easy. This story shares how she overcame a club foot, fell in love with ice skating, performed a show at a shopping mall, and then finally competed at the highest level. [middle grade biography, ages 9 and up]

Additional books about Kristi Yamaguchi include:

Michelle Kwan is a fan favorite at my public library. So, I found eight books on her! This one is my favorite.

Michelle Kwan’s elegance and drama on ice elicits an emotional response. Born and raised in Torrance (just like Chloe Kim!), Michelle started skating at 5. Then, she competed at the Olympic level when she was 18. Despite not winning Olympic Gold, Michelle Kwan is one of American’s most popular figure skaters and also one of America’s most popular female athletes. [middle grade biography, ages 8 and up]

More books about Michelle Kwan include:

Mia blogs on parenting, children’s books, and education at PragmaticMom.com and is the co-creator of Multicultural Children’s Book Day, a non-profit celebrating diversity in children’s books. Her other books include:

How to Coach Girls

Read Your World: A Guide to Multicultural Children’s Books

Learning about the World during the Olympics