The pandemic, I think, is one the most important times to understand the significance of the story behind Holi. Everyone has done the best they can within the confines of their familial setup. No one can negate the fact that it has forced us to look within and without, bringing up feelings of despair, doubt, confusion, and disagreements. The past year we have seen all relationships go through transitions, and even racism at its ugliest, to only to realize how important it is now, more than ever, to be unified. We have realized how privileged many of us are with the position we have in society and our many responsibilities. 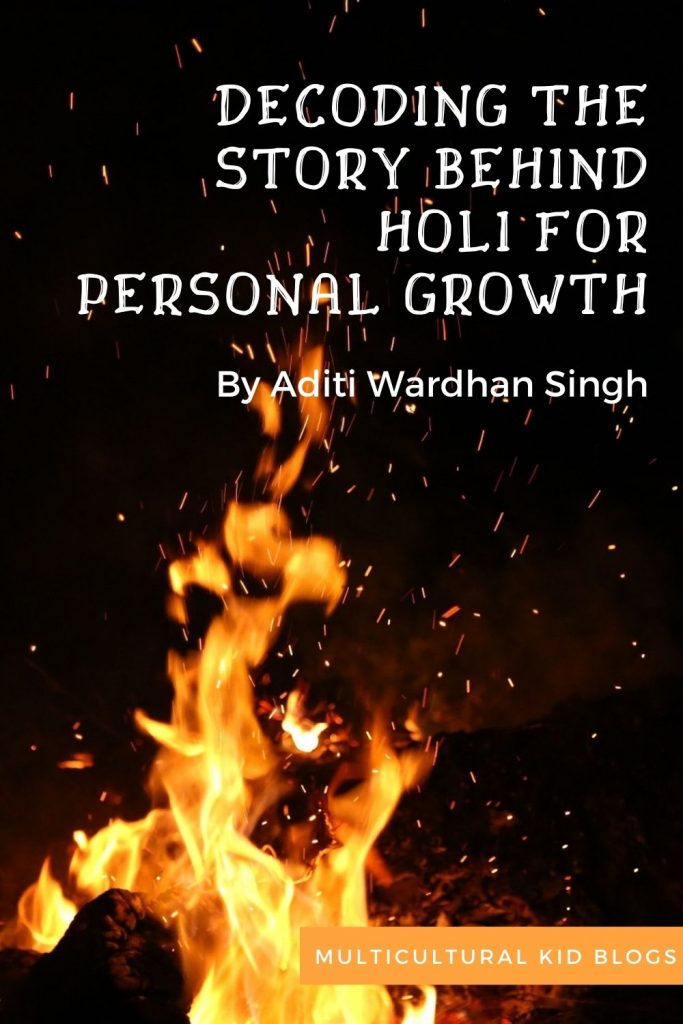 You can read the detailed story of the Holika here but the essence of the story is as follows:

The Mythological Story Behind Holi

There was once a demon king by the name of Hiranyakashyap who won over the kingdom of Earth. He was so egotistical that he commanded everybody in his kingdom to worship only him. But to his great disappointment his son, Prahlad, became a true devotee of Lord Naarayan. He refused to worship his father. Knowing that the gods responded to all prayers, no matter if they came from good or bad men, Hiranyakashyap tried several ways to kill his son, Prahlad, but Lord Vishnu saved him every time.

Finally, he asked his sister, Holika, to enter a blazing fire with Prahlad in her lap. Hiranyakashyap knew that Holika had a boon; that she could not be burned by flame. Prahlad, who kept chanting the name of Lord Naarayan all this while, came out unharmed as the lord blessed him for his extreme devotion.

Holi derives its name from Holika and is celebrated as a festival of victory of good over evil.

The Story of Prahlad and Holika Reminds Us:

Standing Up For Our Beliefs

The story of Holi sees Prahlad standing up for what he believes in: the power of good over evil. It is a beautiful metaphor to all stand united, no matter what the divisions that unite us. We need to stand up even if it means being inconvenienced, judged, or more.

We Don’t Have To Believe Everything Our Loved Ones Believe

When Prahlada prayed to Lord Vishnu instead of his father, he went beyond familial relations for his beliefs. Often, the older generation in our families believe in stereotypes, superstitions, or traditions. Many have been proven to be wrong over time. It’s okay to think differently than them.

You Don’t Have To Hate Someone You Disagree With

Prahlad didn’t agree with his father but he never renounced him or left him; he always disagreed respectfully with folded hands. The humbleness of his demeanor is a metaphor for how wonderfully we all can co-exist. The most we can do is to leave things as is; try our best to explain things but let go when it’s not needed.

Having Patience And Faith Through Struggles

When Prahlad was undergoing all the struggles with his father and family he wasn’t impatient and wondering why he wasn’t just saved immediately. He never lost faith and hope that one day his father would either see the light or Lord Vishnu would save him.

Letting Go Of The Evil Within

The burning of the Holika the night before celebrating the success of good winning over evil signifies the importance of overcoming our personal struggles and demons before we are able to be happy.

The night before the fun of colors and food, we light a bonfire as a way to let of bad feelings like self-doubt, judgment of others, envy, and more… You can read more life lessons of the celebration of Holika and Holi here.

More ways to learn about the story behind Holi

More ways to empower your children with acceptance for all, even self, can be found via the Sparkling Me Series, (children’s books that build on science and mythology).

This Holi, ensure that you spread joy of unity with the colors of diversity, with personal growth and acceptance of all, especially self.

10 Fun Facts About the Festival of Holi

Founder & Chief Editor at Raising World Children LLC
Aditi Wardhan Singh is the author of the bestselling book "Strong Roots Have No Fear". A book for empowering children to thrive in our multicultural world. Aditi writes about positive parenting with a focus on cultural sensitivity. She is the founder and chief editor of the online platform by parents for parents - Raising World Children. The RWC initiative teaches parents to raise global thought leaders. Aditi is also a regular contributor for the Huffington Post, Thrive Global, RichmondMomsBlog, Writer Mom, Desh Videsh Magazine and more.