What do you know about the colourful festival of Holi? It’s a Hindu festival that people celebrate around the world to welcome spring. Revellers throw colour at each other, and neighbours get together to eat and celebrate the beginning of a new season. Here are 10 fun facts about the festival of Holi and its historical roots. 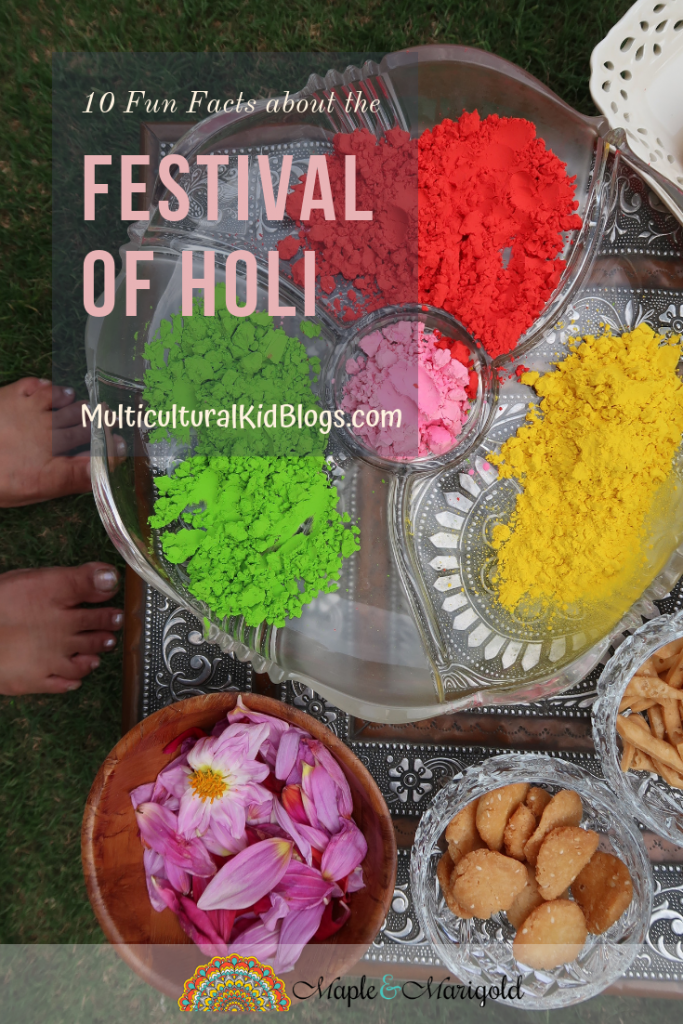 10 Fun Facts About Holi – The Festival of Colour

Holi is a joyful celebration of colour by Hindus around the world. The festival heralds the end of winter and marks the beginning of spring. Families and neighbours get together on the streets and throw powdered colour and liquid dye at each other and sing and enjoy.

There are a number of mythological stories around the festival. The most widely accepted is the story of Prahlad. Legend has it that the evil king, Hiranyakashyap forbade his son Prahlad from worshipping the Hindu god, Vishnu. In defiance of his father, Prahlad continued in his prayers of Vishnu.

Hiranyakashyap mocked his son’s prayers and ordered him to sit on a pyre (a woodpile made for burning a body as part of a funeral) along with his aunt, Holika, who was known to be immune to fire. During the fire test, Holika burnt to death in spite of her immunity.  Prahlad was saved because he asked Lord Vishnu for help. The burning of Holika is celebrated as the festival of Holi.

There are other stories that speak to the celebration of Holi but most (if not all) conclude in the same way: “Good wins over evil.”

Holi is normally a two-day celebration. The day before is known as “Jalane wali Holi” or “Holika dahan” – the day Holika burned. People celebrate by having their own bonfires in the neighbourhood. The morning after is called the “Rangwali Holi” – the day of colour. That’s the main day of the festival.

The main day of Holi starts early and is filled with drum beats, coloured powder, and fun activities. We use to prepare for days beforehand. Kids start playing with water balloons filled with colour and water pistols a week before Holi. 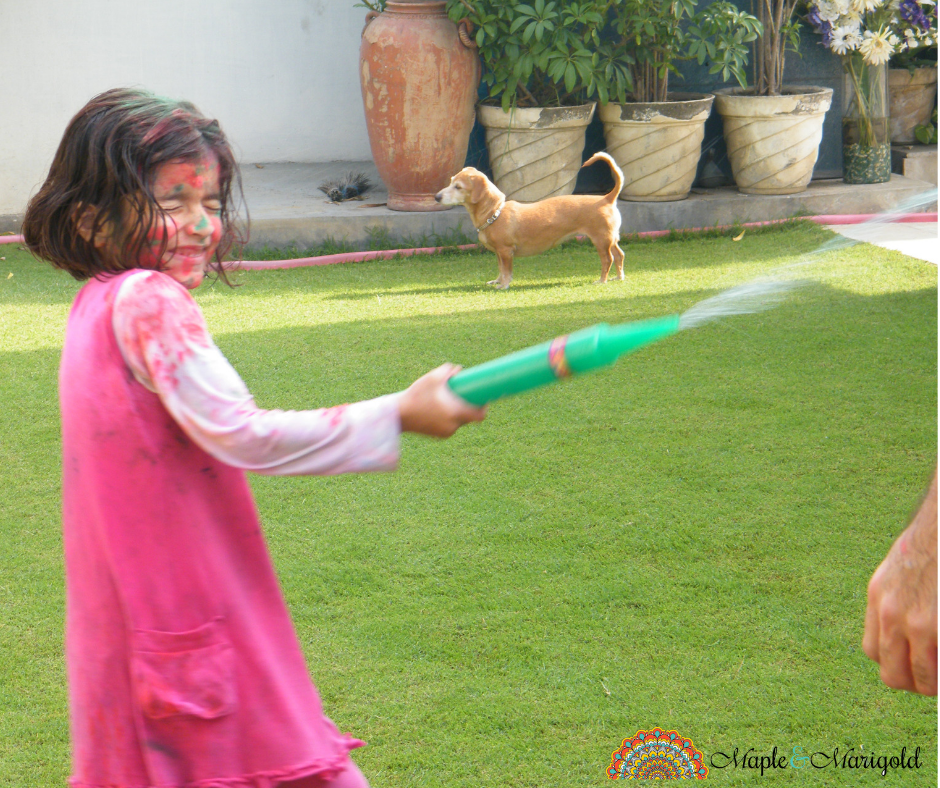 Holi is the only festival where people wear their oldest clothes because getting the Holi colour out in the laundry is a Herculean if not impossible task. Recently people have started to wear white clothes so that the colours of Holi stand out in photographs. Makes total sense in this age of Instagram!

Some of the biggest Holi celebrations in India take place in the temples of Vrindavan, in northern India. According to legend, Hindu god Krishna played Holi with his consort Radha. Tourists flock to this city from around the world to participate and sing and dance with the devotees.

See this video on celebrating the festival of Holi in India.

The festival takes place at the end of winter and the beginning of spring when nature is blooming. The time not only symbolises a new season but also represents new beginnings for Hindus. It’s often a time to end conflicts and let go of emotional baggage.

Like much of this festival, the food also is fun and colourful. Finger foods are most popular since you can eat those even with colour-smeared hands and face. The most popular sweet is Gujiya – a fried and sweetened empanada-like pastry stuffed with dried fruits and nuts.

During the day, people often serve refreshing cold drinks. One, in particular, is very popular – Thandai – a milky concoction of pistachios, almonds, cardamom, and cannabis. I make a kid-friendly version and even freeze it into popsicles for the celebration. 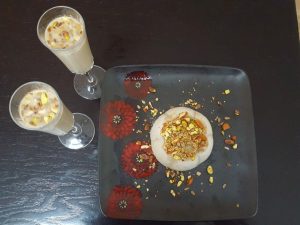 The colours people used long ago for the celebration were derived from flowers and herbs. In the ’80s and 90’s, a push towards mass production of synthetic colours became popular. Tradition gave way to convenience. In hindsight, many synthetic colouring ingredients were toxic for the skin, hair, and eyes. Over the years, people reported man injuries. In recent times people have become more aware about natural sources of colour such as turmeric, beet, pomegranate, marigold, sunflower, indigo and other natural herbs and flowers. These can be used to get the same vibrant colours.

During the festivities, people often throw colour at strangers on the street. Be prepared for the onslaught. Holi etiquette indicates when one throws colour at strangers you say, “Bura na mano, Holi hai!” which means, “Please excuse me, it is the day of Holi.”

The festival of Holi is a vibrant, loud, irreverent celebration of colour. I have fond memories of celebrating it with my childhood friends in India. In Canada, though spring often comes a little too late for this celebration, playing outdoors with colour takes on a whole new meaning. 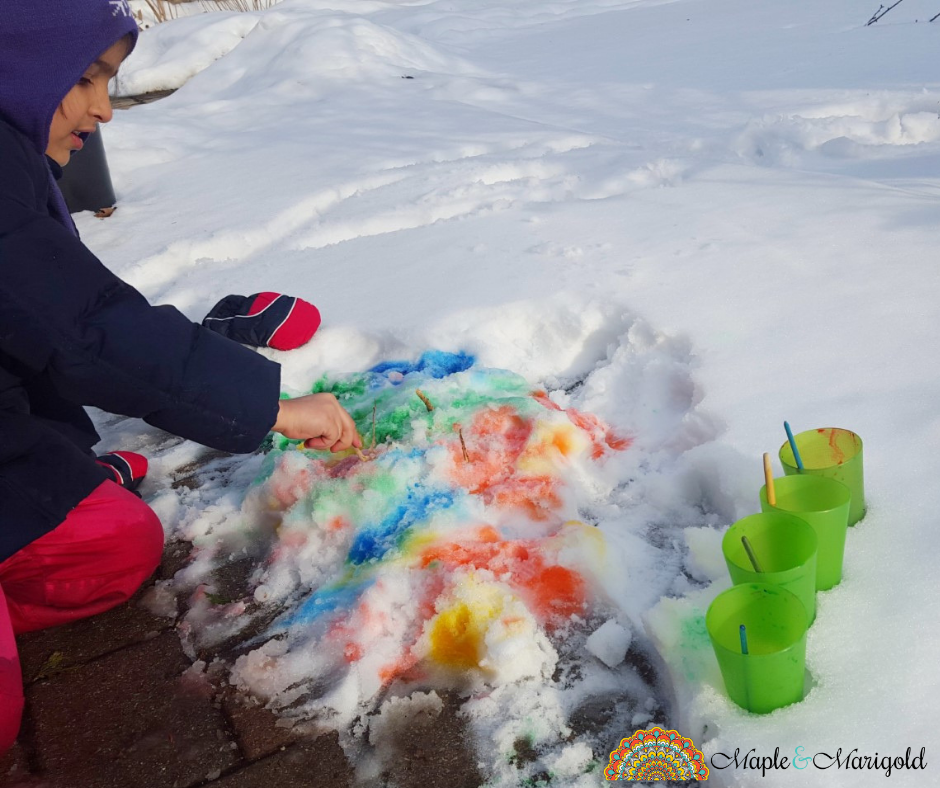 10 Fun Facts for Kids about Purim

Blogger, marketer and mom of two, Puneeta lives in Toronto with her husband and two kids. Her blog MapleandMarigold.com is a love letter to her life and travels, from India to Canada and places in between. She writes about making life healthy, delicious, and enjoyable, all with a multicultural flair.