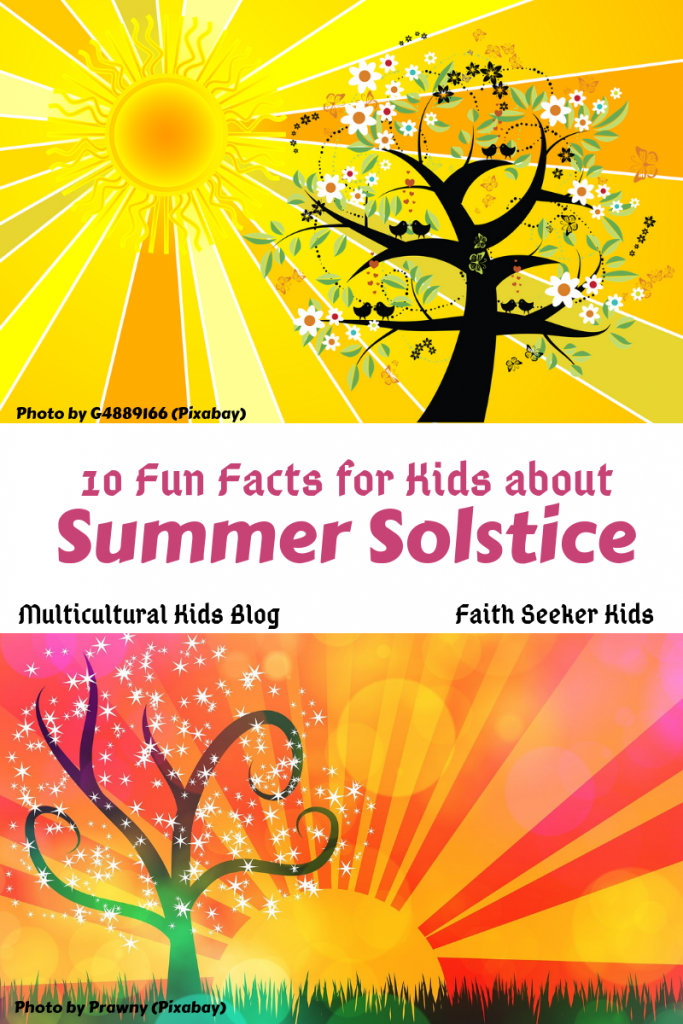 The summer solstice happens in the northern hemisphere around June 20-22 and in the southern hemisphere around December 20-22. It’s roughly defined as the longest day/shortest night of the year, which also means the sun is at its greatest potency. The days will now become progressively shorter until the winter solstice. If you want your kids to be more in tune with the earth, honoring the summer solstice is one easy way to do that – especially since many kids are out of school, and families are looking for fun, somewhat-educational ideas for keeping young ones engaged.

Ancient humans were well-aware that the sun would rise and set at different positions along the horizon. For several months of the year, the sun appeared to move north along the horizon until it reversed course and appeared to move south along the horizon. After several months of that, the sun would appear to reverse course again and begin to move toward the north. Those “days of reversal” are the solstices because, on those days, the sun appears to stand still. In fact, the word “solstice” combines the Latin words sol (sun) and sistere (stationary).

The summer solstice happens every year for everyone on earth, so it has been commemorated around the world for millennia. Those who follow the Celtic traditions call it Litha. The ancient Finns called it Ukon juhla. It’s Klidonas in Greece, Kupala in Poland, and Rasos in Lithuania. Although specific celebrations differ from place to place, the usual festive practices – reveling into the night, eating traditional foods, and practising special rituals – seem to abound.

The most common practice around the world for the summer solstice is making a bonfire. Why, you might ask, would people light bonfires on the day of the year when the sun is most potent?! Bonfires are said to honor the fullness of the sun, to drive away evil or mischievous spirits, and to bring good fortune (or maybe even a mate). Various activities – like singing/dancing around the fire, jumping over the fire, or walking barefoot on hot coals – continue to this day in many parts of the world.

Stonehenge, a megalithic site built in England between 3,000 and 1,600 BC, is one of the most well-known examples of a sacred structure aligned with the summer solstice. It’s actually aligned with various astronomical events, but if you stand among the stones and face northeast on the summer solstice, you’ll see the sun rise directly above the Heel Stone. Egypt’s Temple of Amun at Thebes (2,000 BCE to 100 CE), Peru’s Thirteen Towers at Chanquillo (circa 350 BCE), and Mexico’s Temple of Kukulcan (built 600-1,200 CE) at Chichen Itza are other examples of structures aligned to various solar events, including the summer solstice.

The summer solstice was traditionally an earth-based/pagan festival, and those cultures were steeped in fascinating legends about gods and goddesses. One of the few legends still being told tells of the now-archetypal gods, Oak King and Holly King. They are twins who are simultaneously mortal enemies and two sides of a whole – since neither could exist without the other. Oak King reigns during the spring and summer and represents expansion/growth. His essence is seen in fertility gods like Pan (Greek) and Frey (Norse), and earth gods like Dagda (Irish-Celtic). Holly King reigns during the fall and winter and represents withdrawal/rest. His essence is seen in sky gods, like Thor (Norse), and winter gods, like Grandfather Frost (Russian).

#6…It’s a Christian Feast Too.

One of the reasons many of these ancient deity tales have been lost to us is because Christians designated June 24 as the feast day of St. John the Baptist and tried to get rid of those polytheistic myths. Interestingly, one of the most common ways of celebrating this feast day is with…you guessed it…bonfires!! But in the Christian tradition, the bonfire represents St. John’s light to the world as he prepared the way for Jesus. For many, however, it’s a nice blend of the ancient and the slightly more modern. As another example of that, there’s a cathedral in Saint-Lizier, France where the windows in the side apses align with the solstices (and equinoxes).

If you want to celebrate the summer solstice, do something that honors the sun in your part of the world.

Note: This post contains affiliate links. If you click and purchase, Multicultural Kid Blogs will receive a small commission that will be used towards maintaining the site.

Scientifically, the solstice relies on the fact that the earth is tilted on its axis and is defined by the exact moment in time when 1) the North Pole is angled closest to the sun, 2) when the sun appears farthest north relative to the stars from earth, and 3) when the sun passes straight overhead at noon along the Tropic of Cancer (approx. 23.5° north of the equator). This video for kids explains it really well!

This recent post from Backwoods Mama has great craft ideas and some free printables.

Helping Kids Connect to the Earth: The Pagan Wheel of the Year